Confirmation when clicking "X" or Alt+F4

During a long flight yesterday i was taking some screenshots. by default the nvidia app takes screenshots with ALT+F1.

By mistake i hit ALT+F4 and BANG! the sim closed without warning. No “Are you sure you want to close?” or anything. It just closes.

Please give us a chance to BE SURE we want to exit the game. If you accidentally hit the X … it quits immediately, there needs to be an error correction step there.

What X? If you’re playing in windowed mode, the simple solution is to not play in windowed mode. Last I checked there is a confirmation message when you’re trying to exit through the menu.

No the simple solution is to put in an error trap there LIKE EVERY OTHER GAME HAS. I play in windowed mode for a good reason.

Nah that’s definitely not a common thing. Checked five other extremely popular games so far, but I have quite a few others I could try.

Point is, this isn’t a common feature because it’s not a common problem. Sure, it’s not hard to add in, but why would the devs start wasting time on very niche issues that don’t affect gameplay for the vast majority (presumably, over 99%) of its users, especially when it has an extraordinarily simple workaround, and there are much more severe issues with the game?

If it bothers you that much, open Task Manager, select Options>Always On Top, resize so it’s just the top bar of the task manager, slap it over the MSFS bar.

Hey, maybe your “games” do it that way, but every flight sim I’ve ever had always gives an “are you sure” when you hit the X to exit the game (unless you turn it off). So it IS a common thing for flight sims. I should not need to do any work-arounds … this should be a standard for this simulator.

Hey, maybe your “games” do it that way, but every flight sim I’ve ever had always gives an “are you sure” when you hit the X to exit the game (unless you turn it off). So it IS a common thing for flight sims

I feel compelled to notify you that there’s a rather extensive games market outside of flight simulators, because you seem to have forgotten that fact.

Anyway, would you look at that! MSFS X does have a confirmation. X was also released in 2006, with different goals and way different technology. MSFS2020, in contrast, was designed to reach closer to the gamer community, and utilize much more modern tech such as VR (coming this fall), multi-panel displays, etc. The benefits of running something in windowed mode are pretty much nonexistent for the normal user, and thus, it’s not common for developers to cater to windowed mode users.

In other words, you’re not only in the minority here, you’re in the extreme minority - like I already mentioned. It’s not realistic to expect a developer to cater to your every desire when said desire has a rather narrow demand, and an easy workaround. You should need a workaround because it’s not a common feature nor requirement for games in 2020. If every developer treated games like you want them to, they’d pretty much never release anything since it’s impossible to please everyone.

I’m not trying to be rude, this is just facts of life and the way the software/tech world works. If you act like everything should be catered to you specifically, you’re not gonna have a good time. Sometimes you gotta get creative. Maybe you’ll get lucky and find that there’s a way to modify the files and throw in a dialog box.

Have you tied using the full screen mode? It’s not like most games/sims in that you do not need to Alt Tab to access other applications running on other monitors. You’re free to move your mouse cursor between windows.

I personally HATE those messages and prompts. “Are you sure?” Yes I am sure, I clicked exit! When I open a program it doesn’t pop up and ask me “are you sure you want to run this? Maybe you clicked the wrong button or changed your mind in the last half a second?”

Not sure why it bothers me so much, but it does and always has. Maybe I just don’t like silly questions?

Actually MSFS does ask if you want to “press any key to start” which is utterly pointless.

Just now, as I was running MSFS windowed, I pressed the X-button by mistake instead of the full window button, which lead to a prompt exit to Windows. Pretty annoying, since I had no plans of quitting my flight (or the program). Shouldn’t there be a warning (“Are you sure you want to exit”?)?

30 mins into a flight just now I tried to quit Chrome which was running on another monitor. Thinking it had focus, I hit Alt+F4 and was unpleasantly surprised to see FS simply vanish.

While I would definitely appreciate a way to quit to desktop directly from the cockpit, this really isn’t the way it should be done. You can’t even go back a level in - for example - the activities menus without confirmation, so immediately quitting the sim is totally inconsistent.

I checked the control menus and Alt+F4 actually appears bound to something called ‘Select 4’ under the menu section. I’ve no idea what context that is in, because I tried it there and it still quit.

+1, something like this appears when you exit from the main menu…but there’s nothing for when you press the exit button in the top right of the window (which is a bit annoying…and kinda scary) 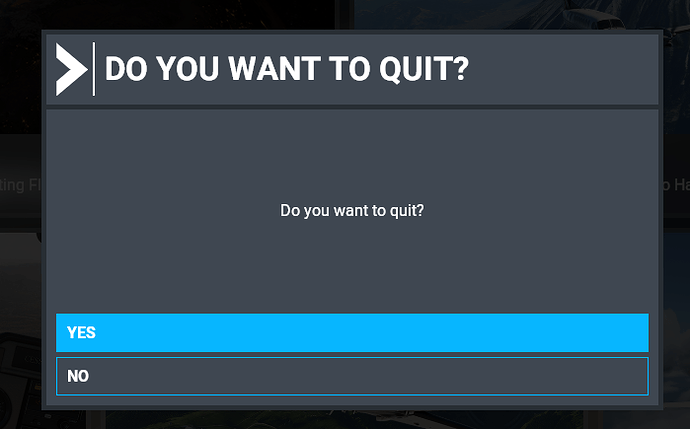 Hmmm ALT-F4 is exactly there for the user to exit programs immediately. Has nothing to do with fs2020. I don’t think it is even possible to build in a confirm box before the closing.
I love ALT-F4 when i need it.

alt+f4 is the global windows shortcut to kill the program without warning, usually in cash of a freeze. So i see no use for putting a warning there

Csgo doesnt not close by pressing ALT+F4 but works differently and gives warning.

Please not another pop up asking for confimation, there are already too many in the IT-World.

Better watch what you are pressing!