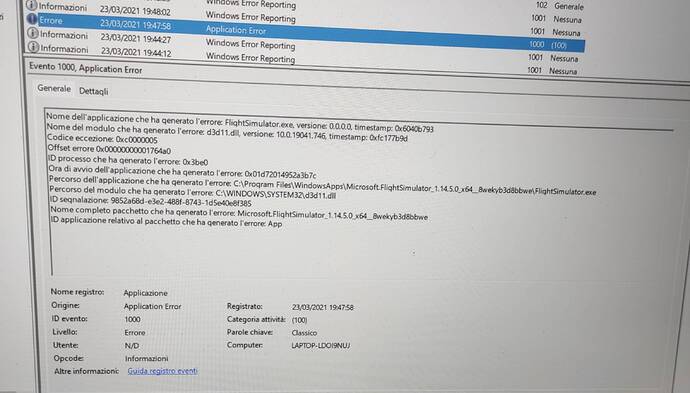 IMG_20210323_2237003047×1739 333 KB
Hello everyone! Can you help me please? I’m experiencing CTD when trying to lunch the sum. The sim check for update, than start to load and when the loading bar arrive at the middle, CTD without error. This is the first time since August! My community folder is empty, I didn’t have Microsoft defender active, everything is updated. Today I reinstalled C++ and Direct X. I had set up the paging file manually in the past, to avoid CTD during flight because I have 8gb ram. I have Ryzen 7 and since yesterday no problem. I checked also system file with SFC /scannow and no problem detected. Thx so much!
Zeppos March 23, 2021, 9:53pm #2

Welcome to the club. If you’re using AMD one thing to check is Event Viewer → Windows Logs → System for any driver errors similar to “Display driver amdkmdag stopped responding and has successfully recovered”, a few seconds before the d3d11.dll message you are seeing.

I don’t really think VC++ libraries play any role in this as MSFS seems to be using its own (I know because I had 1.25.x installed while the Vcruntime140.dll error was for version 1.28). At this point I must have tried a million workarounds (Windows reinstall included) but the game always crashes after the loading screens with either of these DLL errors, probably due to a driver timeout.

Currently I’m running a Linkpack Extreme test on my 2x16GB RAM modules to verify if XMP2.0 is stable (which shouldn’t matter as MSFS also crashes with XMP off or with XMP underclocked). GPU stress tests were successful, other games are performing fine and there are no random crashes anywhere else except with MSFS (which aren’t really random as it effectively crashes at the exact same place all the time).

The only “workaround” I’ve found is to delete random files from “C:\Users{USERNAME}\AppData\Local\Packages\Microsoft.FlightSimulator_8wekyb3d8bbwe\LocalCache\Packages” so that MSFS will redownload them again. Usually when this happens it’ll let me stay in the main menu for 10-20 minutes before it crashes again for no apparent reason. Next time I launch it it’s a 100% crash after the loading screens.

Up until a few days ago I could run the game with AMD Tuning set to manual by only setting a random max fan speed value and/or a power limit. After some point (I think after AMD latest drivers 21.3) this was no longer working but I’m not sure it’s a drivers thing because ever since I’ve done a Windows reinstall and have tried all AMD versions between now and November. None has worked even after clean DDU reinstalls, even without Adrenaline package but just the driver.

You may try the various crazy workarounds proposed in different discussions but unless Asobo release a proper anti-CTD fix I very much doubt we’ll see an end to these issues.

Hi, thx for your very kind answer and for your time! I have Nvidia not And, and the only thing about the crash I found in the event viewer was printed in the screen That I posted here. . Very sad situation, specially because I played every day to mfsf since August and this is the very first time that I’m not able to start the program…

I really don’t think there’s a single root cause for these errors, nor any single workaround (if any). The game seems to be ridden with CTD issues that’s why the main thread has 800+ votes and a few thousand comments. There are several different cases.

I have Nvidia not And

Was your nvidia driver auto updated and since this the issue exist ?

I and thx for your time! I have updated Nvidia driver the 16th of March and the version is 461.92. afther this update I played the game only once with a vfr flight of about 2 hours, without problem. I also downloaded Crj 700 of Aerosoft and everything was good.