Flying a flight plan made in simbrief , the course ends after following before destination.

Have you tried selecting the runway (and STAR) in the FMS manually?

You still need to put your arrival details in the FMS.

The only thing I used to have to put in the FMC is my position, & from/to airports.

You need to also select an approach using the DEP/ARR key menu. Like an ILS or Visual approach and select the runway. Hope that helps. Check out the pdf guide from aerosoft.

I went to ARR & clicked on a rwy I wanted to land on, but didn’t help. I see all kinds of clips on simbrief, & how to import, but nothing what to do with DEP/ARR stuff.

There’s a bit more to it then you might think at first glance but let me walk you through it.

Try to look at it like the roads on the ground. Air routes have their own ‘interstates’ and highways too and they even have their entry points and their exits, just like on the highway. In very big cities you often find multiple exits into different parts of the city. Same goes for big airports.

If you take a look at this route from Reno to Salt Lake City it will tell you that the highway starts at BAM vor-beacon where you’ll turn onto the J154 which is to be followed untill BVL vor-beacon. Short route, so it all ends there already.

Now BVL is still quite a lot away from Salt Lake, but you’ll have to select the exit from the J154 highway that brought you there and lets say that based on weather and ATC instructions you expect an ILS Runway 34R arrival. BVL was your last waypoint and there’s an exit accordingly which is called the BVL2 exit. In aviation those exits are called a STAR (Standard Terminal Arival Route). So now click on your DEPP/ARR button in the FMS, select runway 34 R, select BVL2 STAR and in this case even BVL Transistion. Then press ‘EXECUTE’ and this last segment will be added to your route, ligning you up perfectly with the ILS.

Do check though if there arent any lines in the FMS marked as ‘flight plan disconuity’ or ‘vectors’, it’s save to delete them. Vectors are normally where you will work with heading indications but very often you can just delete them, let’s not make things overly complicated for now.

On this image below you can see that Salt Lake has these types of STAR exits in basically all directions so depending on from what direction you are approaching, you select the appropriate exit and runway in the same way as I just described. Charts can either be found online for free when you google for instance ‘KSLC approach charts’ or you can decide to take up a navigraph subscription that links all this in the simulator like in my screenshot.

One last tip: The sim ATC is often very very very late in telling you which runway/transition you can expect. In Real Life this is told way earlier but I suppose it awaits a brush over from Microsoft. What you can do however is estimate the runway based on the wind direction but also listen to what ATC is telling other traffic. Very often, they are approaching big airports too and you can already hear if either runway 34 R/L is in use that day for landings and prepare in advance accordingly. 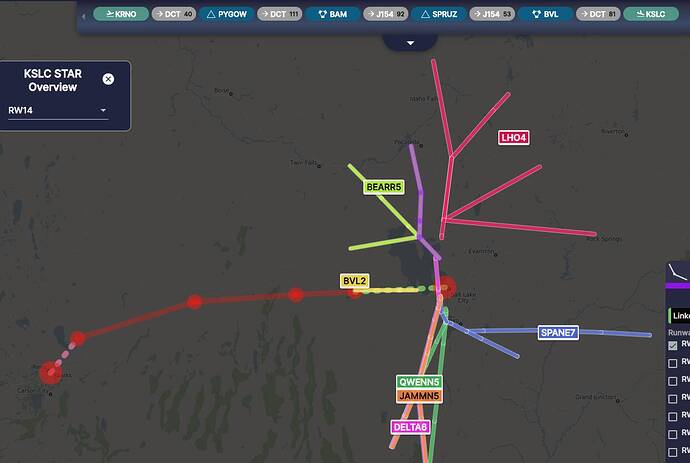