Loading in the CRJ700 - 1st time after the most recent performance patch. I’ve gotten up to about 15 - 20 minutes loading, still waiting. Was curious if anyone else has run into this issue?

I’ve tried to uninstall and reinstall the Aircraft with no success.

Thanks for any tips / help. 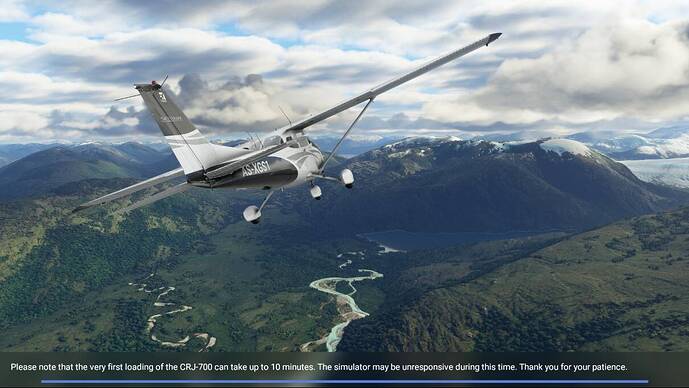 No tips unfortunately, it took its usual 10 minutes or so to regenerate the WASM modules on install or update for me then worked fine.

Maybe see if there is an error in the event log.

Sounds good, thanks for the reply.

I uninstalled the plane from the in-game Content Manager and reinstalled it, here’s hoping that works!

It took me a while on my flight just now, first one since MSFS update. Just be patient I suppose.

First loading takes a while- after that things should run good.

Thanks for the reply. I think my initial loading took ~ 25 minutes but we’re good now!

I was worried after 15 minutes had past but we’re good!

Thanks for the reply. I think my initial loading took ~ 25 minutes but we’re good now!

I started to worry after 15 minutes had past but we’re good!

Does anyone have an issue where… You have been using the CRJ-700 for a while (for this case I last flew it last night) then the next time you load up MSFS, it does the 10 min be patient thing again… Is there any reason why this happens? I thought it was just for the very time you use this aircraft

It was weird yesterday, I went to use it for a “quick…” flight… how often do we say…“oh I’ll just do a quick little flight…” it either takes forever for msfs open or your “quick” flight ends up being an hour…
But the night before the cjr was normal then the next day, it said “your first time selecting this takes 10 min or more” but it was taking forever to load so I just ended the game through windows manager thing and opened again and it was loading normally

Same with me. First load post-su6, very long. After that, normal load times.