CTD after checking for updates

I am receiving a CTD without an error message whilst I’m loading after the checking for updates. I have reinstalled the game, deleted every folder related to FS2020, I do not have any mods or 3rd party apps in relation to this game I have been crashing since the xbox release. I’m not sure what else to do to get it to work, it’s 100% consistent each time I load the game so I have not been able to play since before the release. Any help would be appreciated.

Note: If I launch the game without being connected to the internet it works fine, however if I reconnect I crash

Same here, crashes during the “blue bar” loading of sim after “checking for updates.”. Same empty community folder, and did not have any CTD before SU5. Been happening through the SU5 and both hotfixes.

I’ve found that if I wait until the mouse cursor goes away during loading (after the 50% mark, when the text appears on the background image of the XCub), and then I move the mouse and then hold and click until im in the Sim, it seems to prevent CTD. Not sure why.

Did you find a solution here?

Had the same issue, I could only start the game without being connected to internet. With the latest update (1.19.8) it seems to be fixed.

I’m still having this issue.

Still having the issue as well, i’ve pretty much given up!

Same here. I have installed MSFS on two computers. Both behave the same. Both give the same error message. I’m thinking it has to do with something on a cloud save or something on Asobo or Mircrosoft’s end, not us the clients.

Haven’t been able to fly since world update 5. Only tried offline today, which works, but then you can’t download planes, airports, enjoy the much better graphics which is streamed from online…

I genuinely believe its on Asobo / Microsoft, (maybe even steam for me)

I did the whole disable and delete steam cloud save, still no fix
I tried to log into a different Microsoft account (in sim and ms store / xbox) still no fix

edit 1: it feels weird though that like If I disconnect the internet the game works as it should for the most part, most of my mods works fine and stuff but noooo, the moment I connect to the servers my sim gives up. lol

Someone on a different flightsim forum encouraged me to try Family Sharing, so I made a new account and added it to my “family”.

I have two computers, both have had the same issue and exact same dll mentioned in the event viewer crashes. Had nothing to lose…

So I signed in on the second PC to try. What happened was it was as if I’ve never started flightsim before; it asked me about where to install content, what graphics settings I wanted to use, set up keyboard/mouse/joystick…

Bottom line is; I’m more and more confident that it’s my cloud stored profile that’s wrong/corrupt, than my hardware or software. That’s the only conclusion I can come to.

This all started after SU5… Previously I did not have to install the .net hosting bundle.

So after many reinstallations, many safe mode attempts, many graphics driver installs and nothing but automated responses from Support, I feel there is no fighting chance against this bug. I have narrowed it down to the “Online Functionality” which if you start the game in airplane mode, or not connected to the internet it’ll start up fine. As soon as you connect to their servers/turn on the online functionality, it’ll crash with no error message which doesn’t help to trace it down. I’m not sure if its an xbox service that MS2020 uses or if it’s a issue within MS2020 as an underlying issue, but for a reference I can launch any other Xbox crossplatform game no problem, the only issue is this game.

Do you have any add-ons in your Community folder? If yes, please remove and retest before posting.
no
Are you using Developer Mode or made changes in it?
no
Brief description of the issue:
CTD right after checking for updates but before installation manager download of new wu6
Provide Screenshot(s)/video(s) of the issue encountered: 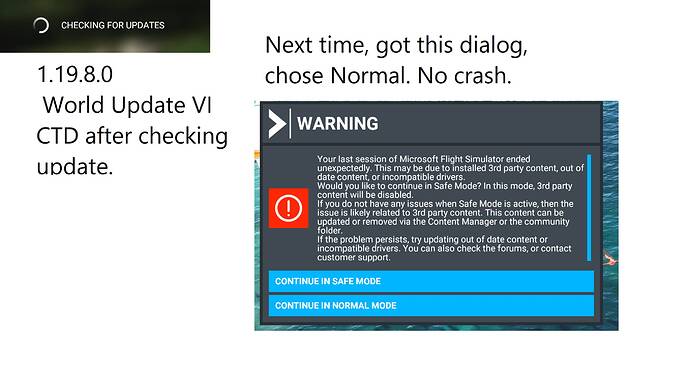 Build Version # when you first started experiencing this issue:
1.19.8.0 wu6
Are you on the Steam or Microsoft Store version?
store.
Did you submit this to Zendesk? If so, what is your ticket #?
no

i have this same problem

Cant fly more then 20 min… CTD. PC all done as per instructions

Clean install, nothing in community folder

Welp, up until now, I’ve not had any persistent issues with the sim. Since yesterday, I’ve not been able to properly install the dang sim. It’ll CTD after it checks for updates, and the blue progress bar is about to be finished loading. CTD. I’ve downloaded almost a terabyte of data for the game since yesterday trying to get this resolved.

Sign in to microsoft store app
Update all apps.