I get a CTD in YSSY when using the FlyTampa scenery with the default a320 aircraft. Might this be a compatibility issue with the new WU7?

No, it should not.
I would try uninstalling the default YSSY and then trying.
I fly regularly out of Fly Tampa YSSY.

Have you updated your FlyTampa YSSY addon after the new WU7 update?

Again, did you uninstall the default YSSY version from the content manager
If not, it will cause issues!

There is no basefile to delete in the contents manager. The only file that shows up as YSSY is the addon file, so I cannot try what you are suggesting, unfortunately.

It should be, unless it’s an xbox thing. 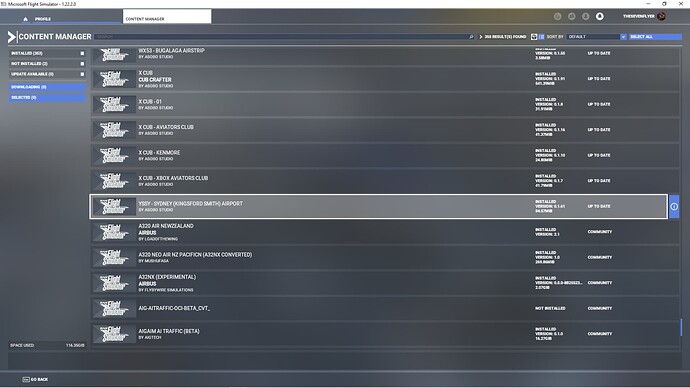 Unfortunately on Xbox that is not possible:-/ I uninstalled and re-installed the addon and still the same problem. CTD at gate in showcase mode:-/

Do you have any listings for default airports in the content manager?
Does this only happen with the A320?
What livery are you using when it happpens?

the only ”default” airport sceneries are the ones that are hand customized by Asobo for the GOTY edition (for example ESSA). I am using the default MSFS liveries with the a320 only. I did not try it with other aircraft. I installed it today so I am not sure if it would have worked before the WU7.

Ohh, if you’re on Xbox then the FlyTampa YSSY may not have been updated yet. Marketplace contents can sometimes need about 16 weeks for a new content to be available after the actual addon has been completed and submitted for release.

The FlyTampa YSSY update was rolled out on other markets like ORBX for PC. But for the marketplace, it may take a while even for both PC and Xbox.

You’re spot on!
The fix has not yet, only for PC.
I didn’t think of that!

So this was a known problem before the update? I wish I’d read about it before getting it​:see_no_evil:. Thanks for the help guys!

Some time ago I posted asking about a possible conflict between Asobo’s and FlyTampa’s YSSY Sydney airport. It was suggested that I remove Asobo’s version, but on the Xbox that was not possible. I ended up removing FlyTampa’s, but I recently checked Content Manager in List view (vs. Package view) and no longer saw Asobo’s version there, which I can’t explain. So I reinstalled FlyTampa’s. I haven’t flown out of or into there since, but I can try it later.

We on Xbox never used to be able to remove Asobo’s airports, but I was recently able to remove the default Chicago O’Hare (KORD) and kept my addon KORD. I haven’t tried to see if it works with other airports.