Looks like SU10 is shaping up to be another disaster on Xbox,

After this last update, for me the performance is now magnificent. Frame rate is good, feels like the LOD has been pushed out and the PG loads smoothly. As good or better than I’ve ever seen it.

The reliability is a separate issue, averaging about one CTD per hour after about 3 hours. I do have addons, and things might come right after they’re updated.

If they shipped it now though, I’d still take it just to bank the performance gains. Some of the previous SUs haven’t been kind to Xbox and this does feel like a step forward.

The other thing that seems much improved on Xbox Series X in this latest build is the performance over mountainous terrain. I’ve particularly noticed this when flying over the Alps, as this was an area that could sometimes get a little juddery even in GA aircraft. Now - smooth as silk.

I’m gonna try that later this weekend, indeed the Alps are(or must I say, were) notorious.

Clear your Rolling Cache. I just bought the Honda Jet and was having CTD constantly.

Cleared RC and had no issues.

The same for me. Performance is excellent now, panning sorted out. No matter where I fly it seems so smooth. Hope they don’t mess it up for release

After this recent sim update 10 beta update performance has been brilliant I am able to fly with live weather into handcrafted airports now without lag or any stutters or any black screens or CTD. This is on Xbox series s

Note: No stutters or lag at all unlike before the update. I have a small amount of add ons downloaded to the sim and it is almost running at pure vanilla apart from the few aircraft and liveries downloaded but have no add on airports downloaded at all. This new update looks promising

The new beta update does NOT look promising at the moment…the amount of xbox console users can barely get any flights in let alone land at airports,if its handcrafted or 3rd party paid content. Its unacceptable for it to be barely playable for some players like myself and others in my position.

I only have problems with some 3rd party airports, just like with SU9. Other than that, all is working fine with top notch performance. It’s night and day compared to the stutter fest SU9 was.

This thread is full of users posting a range of opinions on the various beta builds - from the bad to the, following the latest update, increasingly positive. I don’t think it’s reasonable to try and limit the range of perspectives or suggest that people only post in this thread if they’re experiencing performance problems - particularly if the thread title no longer arguably reflects the very good progress that has been made through the beta build.

Things are looking better at my end as of late and that’s coming from someone who could swear their experience is cursed or something. Still pretty choppy in places and seeing the occasional CTD but definitely better.

ATC still goes quiet and things like that but I hope this kinda thing will get addressed next.

(XBox) After messing with various settings and still getting CTDs I came up with an idea: rather than using 3rd party airports that I have bought numerous of I am now trying the opposite: using plain vanilla airports thus specifically no “bespoke airports” and no 3rd party ones.
I started with regular flights between Vienna (Schwechat) and Bratislava which is quite a short hop. I tried several planes: the stock A320Neo and all variants of the LVFR a321neo with and without cabin.
The surprising result so far: not a single CTD given the fact that after each flight I restart the sim while I’m starting and ending a flight cold & dark!
Was a great experience on one hand but I’m really getting mad at either the 3rd party vendors and/or MS/Asobo for the trouble with the “bespoke airports” and even more with the 3rd party airports, given the amount of hard earned money I have sunken into them.
What do you guys think?

Good to hear you finally got decent results now

Restarting the Sim after every flight is always a good idea. Although, with this latest beta build I’m not sure if it’s still necessary. Personally, I gave up on 3rd party airports, especially the bigger ones. There are only a few 3rd party developers I can trust for Xbox. Pyreegue, UK2000, Beautiful models of the World you can buy from without a doubt. FlyTampa for example, I would avoid.

I hope that we some day are being able to enjoy all of our 3rd party content. For now, I’m so very pleased with the performance gained with the last beta build. Moving forward, again, let’s hope for the best.

Very good result for performance and stability in the sim but from a week I can’t even start a flight with the B78X or B748 that the sim crash. I’m not experiencing this problem with the A320Neo and A321Neo or any other airplane.

I had several CTD’s yesterday on XBSX. Took ages to finally get the game to bootup and play.

Also suffering with alot of image lag in cockpit where the frame for windows looks like it is ghosting when you pan around.

We know 3rd party sceneries and airport were causing lots of issues in SU9 and before but those that expect 3rd parties addons to be suddenly working on a Beta version should be patient. I guess most of those addons will be updated and we all hope, fixed once the official version is in the Sim and they can work on it. I guess for them fixing things on a moving target is not really possible in most cases.

Actually, I don’t think when SU10 is released, we see our 3rd party airports to work. Unless Microsoft gives them the tools to debug their content, I don’t see that change. Correct me if I’m wrong.

Does anyone else experience this? If so please report it in Number 1 in the Release Notes (Xbox Series X has AMD “Project Scarlett” and I believe DirectX 12) 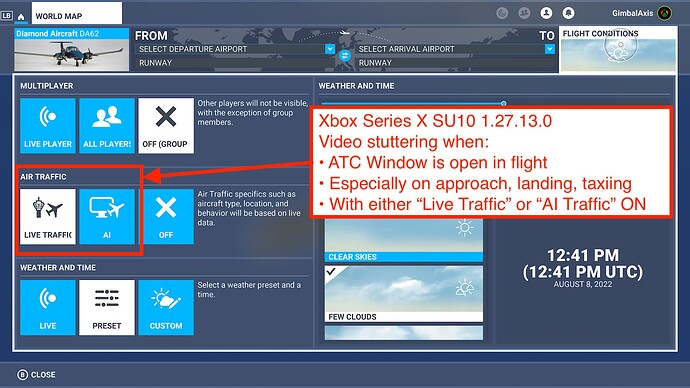 Is it fixed as stated? [ ] Yes [ ] No [x] Partial If no or partial, please give details below on your findings: On Xbox Series X (which I think has AMD Project Scarlett and thus DX12?) there is video stuttering when: The ATC window is open Live or AI Traffic on Especially when coming in for landing and taxiing after. It is very smooth when the ATC window is closed. Forgive the camera moving in the video (a side-effect of me trying to Trim using Xbox controller) but you’ll see the stutte…