Custom buildings not loading in until you go close to them

I used developer mode to create the airport but when facing this issue dev mode is off.

When I load into the airport I created some of my custom buildings do not load in until I taxi the plane close to the custom building or until I go into drone camera and move towards the building.

I am not sure how anyone else can reproduce this issue but I am happy to upload my Airport project files, My custom building models and I can upload any other files if needed.

My PC specs are on the less powerful side but I still can run MSFS at 1080p medium settings at 25fps which is fine for me:

If someone can find a solution to this problem it would be greatly appreciated by me.

I’m not an SDK developer or anything so my advice would probably makes no sense… But shouldn’t custom building models like that needs multiple models for each LOD level?

I mean, the sim works by having multiple LOD which “phases” through different model shapes according to the camera distance. This is how we can save FPS by making distant objects to be rendered in a lower quality to make room for the GPU to render wider area field of view. The hope is that the lower quality models wouldn’t be noticeable when viewed from a distance.

Otherwise, without it, the GPU will render full resolution and full polygon at any distance, while at the same time it’s trying to render more things as more objects come into the field of view.

So if I had to make an uneducated guess, would be that your custom model might only be applied to a certain LOD. Which is why on distant camera it’s trying to call a lower LOD model that doesn’t exist, which is why it’s not rendering any building until you get close to it and that’s when it’s fetching the higher LOD model which you have created, thus it appears out of nowhere.

I would think that if you create multiple custom buildings each with a lower detail for each LOD level. That the sim would render them correctly.

Again, I’m not an SDK developer, so this post can probably be totally incorrect. I’m just thinking logically based on my observation.

I understand what you are saying but that terminal building that I am having the problem with is not very complex and therefore I did not bother using different LODs. I will still try to use different lods.

Neo is spot on about the different lods, if your building appreas at last moment ,you’ll only have 1 lod version.

I am very new to this but do the other LODs need to be a lower quality because the building is already basic.

It sounds like a scaling issue on export. Forget LODs.

The sim believes it’s smaller than it is and has allocated it a weedier draw distance than it should have.

You can either check the size in the program you’re exporting from to see if it’s weirdly small, or you can artificially inflate its scale by adding planes or boxes made from a MSFS invisible material to the model.

I added a huge invisible plane to my building object and I still face this same issue. In blender and the MSFS scenery editor the building is 135m wide (correct and normal size not really small). I really want to know if there are any other ways to edit the draw distance. I have not tried adding LODs yet but I am unsure if only having one LOD is making the draw distance tiny (like a 50 metre draw distance for a 135 metre building). I am having this issue with some of my hangars and one terminal but the other terminal works fine and loads in from miles away.

I will give everyone a google drive link to download all of the files for one of the buildings I am having the draw distance issue with so that someone who is kind enough can download them and test it for themselves to see if there is anything I’m doing wrong. Terminal test - Google Drive

Try embedding the plane in the mesh of the terminal, not hovering above it.

Lower it until it’s part of the terminal and do ctrl j to join them into one item.

Even if it’s one file, maybe the sim sees them as two separate objects and will allocate visibility on that basis.

And you shouldn’t need a plane of more than 50-200 metres in most cases. That has worked for me in the past.

I haven’t seen this issue with big objects like a buildings but with small custom models like a fence post the objects do appear only when close. this is the only solution I have found so far. 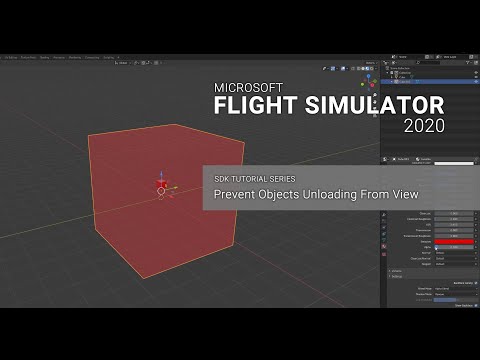 out of interest when you made the model, is it to real life scale or are you scaling the object size up when in the sim?

Thanks so much you fixed the problem! I owe you one