Detail in Seattle is really amazing

I’m exploring Seattle now in the new 103 sport plane, and I see detail I did not ever know was there before.

This is the most fun I’ve had in flight sim in a long time. Its a form of flight that more matches how the birds fly, how I see myself flying in dreams. And to have the landmarks look just right makes the feeling much more like real. I attach a pic that won’t mean much to most of you, but local Seattlites will recognize a pretty amazing version of the Original Rainier Brewery along I5 just north of the West Seattle Freeway. 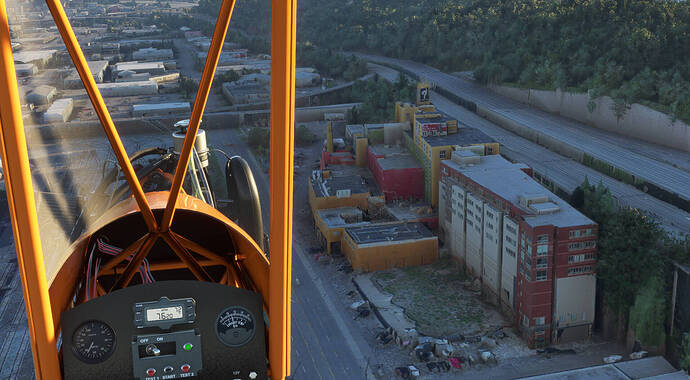 What software did you use to create the photo area-based tag of the Rainier Brewery, IFYDMMA? Interesting that the “Rainier” tag shows up in mousing over the compacted picture embedded with your post on this page but not, for me, when the picture is expanded out of the page to a Picture Only view at maximum posted size?! Perhaps that’s inherent in the HTML involved?

Just copied the screenshot to photoshop and made it jpg. Ranier is the name I gave the jpg file on my HD. I’ll say the image is cropped vertically cuz I left myself in dev mode, so I cropped out the top pixels. Not sure if any of this helps you.

That looks like a pretty good example of photogrammetry when it works, for the buildings at least. Not so much for the cars, but it never works well for the smaller objects like that, especially individual trees.

Maybe it’s been way too long since I’ve looked carefully at any posted screenshots on the forum here. Went back to posts where I’ve included a screenshot with my own post and I see the .JPG photo title appears when I mouse over my own posted picture. Duh! I guess the thing that got me stupidly excited about your Rainier Brewery post is that “rainier” appeared when I first moused over the brewery itself and I didn’t examine the rest of the picture. I foolishly thought that you had a way a la Facebook to tag specific areas within a picture, like the Rainier Brewery building. That’s what I was hoping. It would be great if there were a simple way of labeling points of interest within a photo with a hidden pop-up tool tip-like label. Great picture of the brewery, though, and amazing detail. In my own home town cruising, though, when I fly over the site of my maternal grandmother’s old house in Bryn Mawr, PA, near where I grew up, it’s the parking garage of a nearby hospital that I now see in glorious detail where her century’s old house used to stand. Here’s hoping the Rainier Brewery does not meet a similar fate any time soon!

Small world, I have family in Lansdowne.

that’s just the name of the screenshot file he shared.

Thanks, @moxiejeff, for explaining. I should have known that from posting quite a few pictures myself in the past here - and belatedly rediscovered same from reviewing my own old photo posts. I should avoid bleary-eyed reading of forum posts in the early AM and go to bed at a decent hour!

@EcstaticRock92. Even smaller world. One of my sisters used to live for decades on Gladstone Road in Lansdowne just a couple of blocks from the SEPTA train station in a lovely slate-roofed duplex.