Hello There!
I’m Fergus ST and I live in Canada, although I used to live in Vancouver B.C., but moved recently.
Anyway, I use VATSIM constantly and have just started creating some sceneries for the New MSFS.
I was very excited to see that FSimStudios had converted over their CYVR Vancouver Intl to MSFS, but I have not very much money saved up for any sceneries, no matter how good they have created Vancouver (Which they have done a quite swell job)
Therefore, I decided to create the Vancouver Harbour Flight Centre.
There will be PAYWARE and FREEWARE versions of this airport, with the freeware having just the seaplane base along with a couple custom models, and the payware with many different models around Vancouver. I have decided to create a version of the VHFC, with both being easily usable (but of course)
With a freeware version, I wanted to try to make it quite good, but of course to make people actually buy it and not only get the freeware, I will add many things to the scenery, including a bunch of the important buildings in Vancouver which is missing from FSimStudios, and some kind of small details just so you can lose those extra 5 fps when you look at Vancouver!
So yeah, I’ve only been working on this for about a week, but I am 100% prepared to battle the difficult world of Microsoft Flight Simulator SDK, and I guess
This is my announcement of the VANCOUVER HARBOUR FLIGHT CENTRE.
Feel free to join my Discord for announcements, to report bugs, for support and progress reports! https://discord.gg/pggkB3XgGJ

5/20/2021 Dev Update:
I’ve spent the past week making some models for the Payware version of the Vancouver Harbour Flight Centre, currently including the BMO tower, the smaller building of Vancouver HeliJet, the Helijet heliport, the Digital Orca and the lookout point of the Iona Terminus.
This project is a lot bigger than what I expected, but it’s a great learning experience and I am enjoying this quite a lot.
Also, all these objects are solid objects, so they are perfect to crash into! 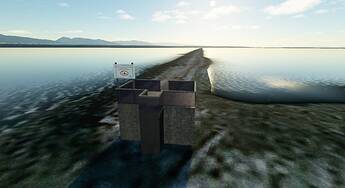 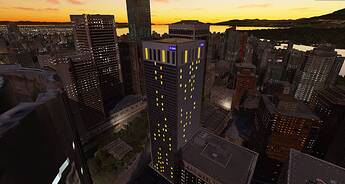 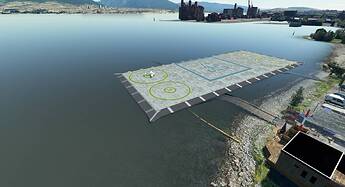 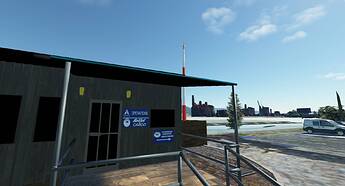 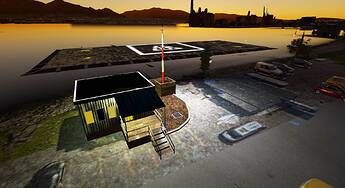 HeliJetPic11920×1048 241 KB
Also, the HeliJet building has flashing red lights!
And, on a side note, after re-texturing the Chevron twice, I have found out I need to re-texture it again because that I textured it completely wrong.
1 Like
LonelyGamer74 June 3, 2021, 6:07pm #3

6/3/2021 DEV UPDATE:
In the last 2 weeks, I’ve done a bit of progress, although not as much as I wished as I became distracted with other games and some schoolwork. The two major things I have finished have been
Fixing up some minor errors in the version from 2 weeks ago
Completing the Alex Fraser Bridge, located in Delta, B.C. even including the flashing lights for low VFR flights on cloudy or rainy days 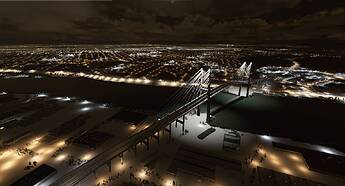 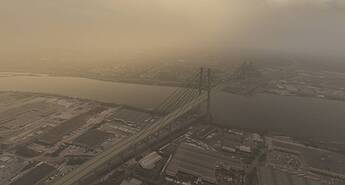 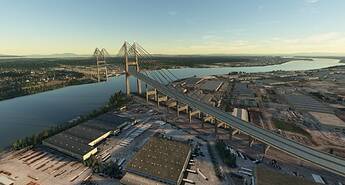 image1920×1032 254 KB
And as of yesterday I have started remodelling the Vancouver Harbour Flight Centre for the 2nd time, this time with about 80% more accuracy!

As you have probably read above, there is going to be a freeware version and also a payware version. Currently, we have no ETA for the payware, as I keep taking longer then I think I should be, due to myself adding more and more things to the payware.

With the freeware, I’m aiming for it to be able to be released on flightsim.to by around June 12th.
That’s pretty much it for this dev update, make sure to join the discord for more frequent Dev Updates and other stuff, like questions or suggestions!

Check out the FergusST Official Discord community on Discord - hang out with 20 other members and enjoy free voice and text chat.

[DEV UPDATE 3+FREEWARE RELEASE]
This evening, I released the very first version of the Vancouver Harbour Flight Centre as a freeware on flightsim.to

✓ (CYHC) Vancouver Harbour Flight Centre is a Microsoft Flight Simulator 2020 mod created by FergusST. Download for free to enhance your experience in MSFS 2020.

This version is a very basic version that will be updated every few days, as this is only version 0.2.3, so it’s more of a testing-beta phase right now.
Pretty much my entire week has been put into this, and schoolwork.
The seabase area is fully made of textures that have been completely made by myself, and it has full day/night cycle for lighting.
A full release (Version 1) is going to be a long time, and of course that means the payware version isn’t going to be very soon either.
This entire thing has been a great learning experience, and I’m grateful that I’ve come this far.
That’s about all for this Dev Update! 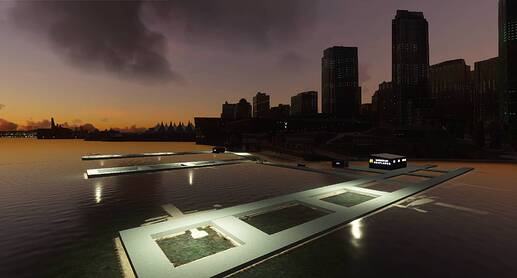 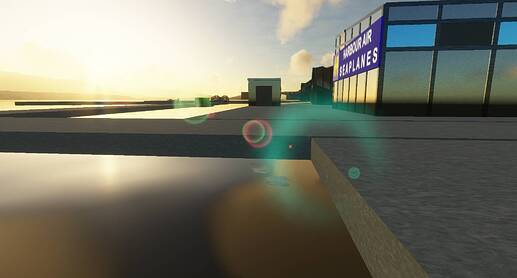 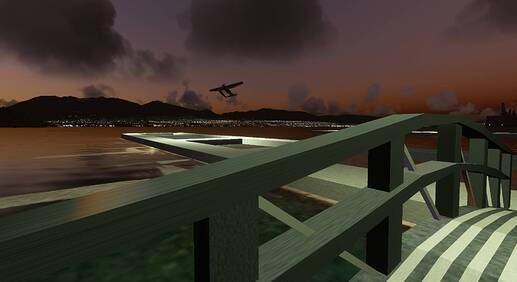 Dev Update 4:
It’s been awhile.
A good amount has been done, although mostly for the freeware version so far.
During this time, many updates have been placed on the freeware version, now up to version 0.3.9
I’ve made a very simple float plane static object which looks pretty nice for the use of the Flight Centre, as seen below. 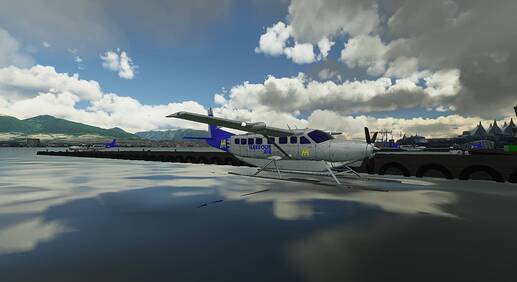 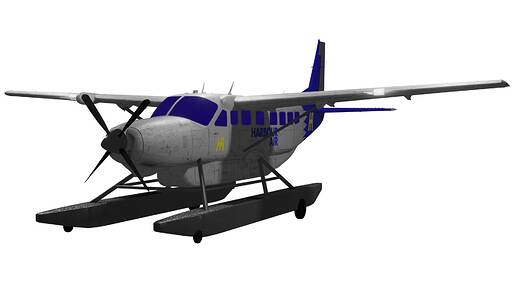 HarbourAirRender1920×1080 70.7 KB
Also, I’ve started on a random Shell Gas Station in Vancouver for fun, and is nearly done! 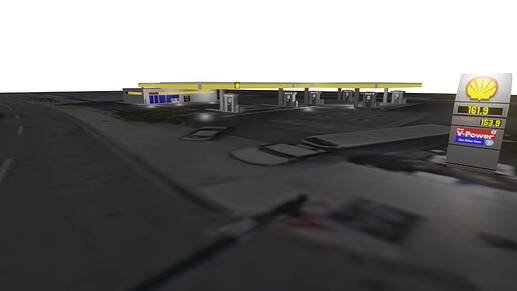 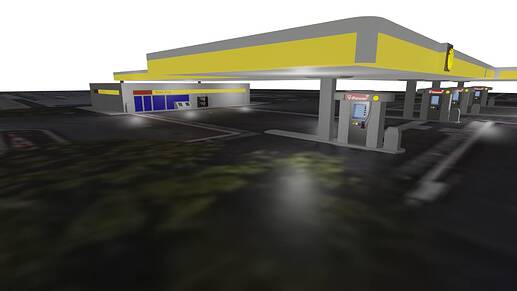 ShellRender41920×1080 68.6 KB
Along with the stuff about Gas Stations, I need to make a couple more edits to the floating Chevron Station before it’s completely done too. 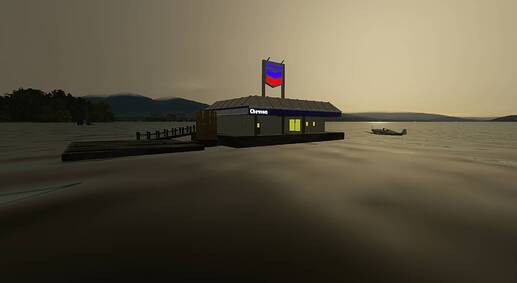 We still have quite a lot to do before this project is even close to finished, but it’s been fun but tiring, and very time consuming with just one person who starting using Blender about 5 months ago.
Anyway, have a good day everyone, you can join my discord at https://discord.gg/3MX5ttQ92F
and you can check out the VHFC Freeware edition at
(CYHC) Vancouver Harbour Flight Centre Project » Microsoft Flight Simulator