Please use this thread to post your impressions and feedback about the DG Aviation DG-1001E neo.

I have just tried the DG 1001 glider, unfortunately I was not too impressed. Visually the glider looks great however I noticed an absence of adverse yaw and when demonstrating the primary and secondary effects of controls to myself the glider did not respond in the way I would expect it to. I need to have some more time with the gliders to put them through their paces. I have a few decades of gliding experience but have not flow the real version of the DG. My flight was only a few minutes long.

My initial impression of wing flex is that it looks very realistic. I am not sure why the wing person decided to rock my wings up-and-down while wings level for the aerotow. I did not get waved-off the tow by the tug plane and it continued flying straight and level after I released from the tow. Most tug pilots are in a hurry to get back down on the ground to save fuel and get the next glider in the air.

I can’t get either the tow plane or winch launch to work. Tried moving rudder left and right a few times like it says using both rudder pedals and keyboard assignments but nothing ever happens.

Looks pretty good sitting on the ground at least…

I did not waggle anything to start the aerotow, (oh, I went round the box doing my control checks while moving rudder left and right). My flight started with the wings level. I aero towed from Blackpool UK. Not the best place to try soaring from, in fact l was towed out into the sea!

how do i start the engine

I’m not sure how to release the tow rope. In the flight training it told me to press b on the Xbox controller and it worked. In free flight it did not. I had to manually click it in the cockpit. Ideally, I’d like to set a key bind to my hotas but can’t figure out how.

I had the same issue. I can’t find the option to give the function a keybind. Looks and flies great though.

Honestly, I was waiting for the DC3 and the helicopters. They are really good too. But then I flew the two gliders.
WOW!!!
I flew the DG Aviation DG-1001E neo in VR and I am simply at a loss for words. It was an incredible feeling for me. For me, one of the best experiences I’ve had in VR so far. The developers have really done a great job here. And a thank you to Asobo for the great thermals ;o) .

(But I still have one problem. I don’t understand how to tell the guy on the wing to get going. Well, I’ll figure it out one day ;o). )

You need to bind “Tow plane/winch release” to a button of your choice. And to use the air spoilers bind “spoilers axis” to some of the axis in your hotas

Is there a tutorial on how to use the tow and release the cable etc? Did I miss something?

Yes there is glider training in the standard built-in trainings section, well worth completing all 7 missions.

Just flew for 30 mins in scratchy lift and it is great. Only complaint is the lack of adverse yaw. The thermals were surprisingly realistic.

thanks! good to know

Thanks! I tried to look for it earlier, couldn’t find it, but completely forgot I could search by name.

(But I still have one problem. I don’t understand how to tell the guy on the wing to get going. Well, I’ll figure it out one day ;o). )

Move the rudder back and forth a few times, that’ll tell them to start launching.

Nevermind the gliders, have you seen the modelling of the winch vehicle?! It’s better than some aircraft 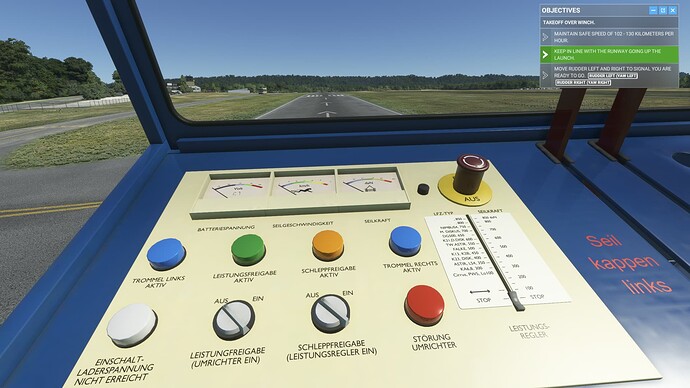 how do i start the engine

Lift up that red Power Switch cover and press the switch under it.

How do you switch between the Cessna tug and the winch? Also, was there a manual for any of these?

Take a look at the plane customization settings when you set up a flight. You can chose there between the tug and different winch types.

excellent, this is the true control panel of an ESW2B electric winch. Got one in my flying club