Unfortunately, since the last update(1.12.13.0) the DA40NG has been missing the Garmin cover on the left.

Install the Working Title mod for the G1000. It fixes that, plus it adds a boatload more functionality.

Many Thanks. I know that the mod exists. Seems to work fine too, but it’s not a permanent fix. MS / Asobo has to fix that, and not leave it to the community, if that’s the future way I’ll really get mad. It is a GA aircraft and not a third party product. Thank you anyway for the tip. Does MS dad the bug exist? Or should I still open a Zendesk ticket, has someone already reported that?

it adds a boatload more functionality

Test it and only works 50% for me. Can see the new Options but Garmin still Coverless…

Solution is to use Diamond DA40NG Improvment Mod and G1000 Mod. Both together was the final Way.

Diamond MOD DA40-NGX Improvement Mod (v0.7, Jan 07)
Its importend to use it together with your linked G1000 Mod. Works only together…

EDIT: MOD is to buggy, i hope ASOBO find a solution for that bug.

I have to get the thread up again. Somehow the topic seems to have disappeared. Since I don’t want to use any mods, I hope Asobo takes care of the problem. Created a Zendesk, but haven’t received a response yet. Which is strange when I use the file from Mrtommy, he still has the cockpit file before the last update, the problem disappears. I’m a bit surprised that so little are affected by the problem, although it is a really disgusting bug.

Most likely everyone is using his mod, which would explain the situation that nobody reports it. Also after new install of MS, Bug still here.

That’s because you’re getting the latest updated model from Asobo.

I was also hesitant about running mods when I first started, but I’m a convert now. Give it a shot one time. None of the DA62X or WT G1000 files go anywhere except the Community folder, so if you don’t like what they offer, just shut down the sim and delete the files to go back to the original. And yes, Asobo needs to make fixes, but until they do, the freeware community is a big step in the right direction.

Yes i know, at the moment, its better to play with mods, or take just a other plane. By the DA40 Mod is the AP (FADEC) buggy, and never stop with climb. I really hope Asobo fix this soonly. You have also the missing Frame without Mod?

I just wonder sometimes whether all or only some are affected by the error, or are all using mods? Just because nobody answers here at all, do you know what I mean? Dont verget to vote

You have also the missing Frame without Mod?

Yes - the default is currently faulty. The DA62X mod has only been downloaded a little over 15,000 times, which is a tiny amount compared to the number of users claimed by Microsoft. Maybe the Diamond twin just isn’t that popular, or many users just don’t know enough to know it’s a problem.

I talking about the DA40NG. By the DA62, i get thi missing garmin frame not, and i play stock, without mods.

It’s amazing. The bug has been here since patch 1.12.13.0 was released, but nobody seems to be bothering it. I mean why hasn’t ASOBO fixed the bug a long time ago?

Just to keep up that Thread. Bug is still here…

If you check the Date Modified timestamps in the files in each aircraft, the only things that were updated were the layout and manifest json files. Nothing else was touched. Get the DA40-NGX addon that improves performance and includes an older model file with the correct bezel frame. While you’re at it, get the Working Title G1000 mod and enjoy higher levels of functionality. They’re both drag ‘n’ drop into the Community folder, so there’s no risk. If you don’t like them, just delete them.

Yes I know. We are spinning in a circle. I personally tested the mod and was not so satisfied. The wing texture also looks broken with the mod. It is a bug that ASOBO has to fix. It is a standard airplane. I repect the work of modders, but I don’t want to be forced to use them just to make the most basic work. I said it before. And the fact is, as already said, that my Garmin has been defective since the 1.12.13.0 update. I don’t know what I would have changed myself.

Seems like you’re happy to use this mod, but please respect it if I don’t want to. You always come up with the same topic. Hope that is now clarified;)

You’re not alone, no cover for me either: 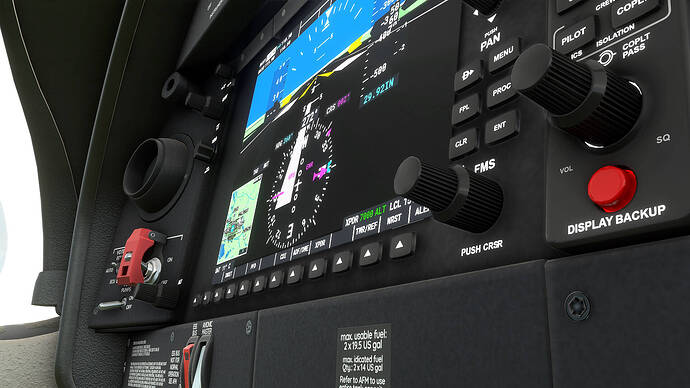 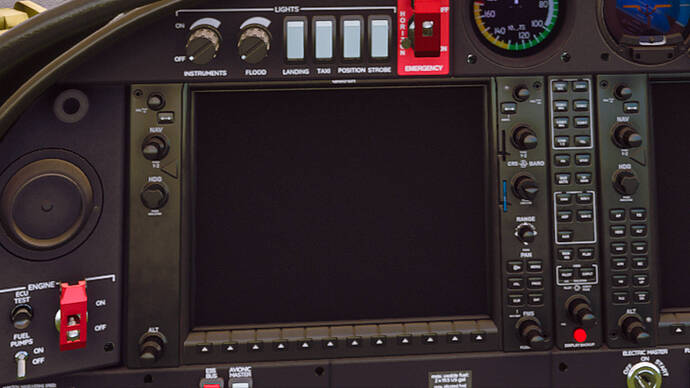 So much thx for your Feedback.

You use MSFS over Steam? Or over Microsoft Store?

Aah me to, interesting…

You’re right, I fly some time to time this bird, and I even did not notice this yet

So here is a minimum fix turnaround package for this bug, Fix-DA40-G1000-Cover.zip just download, unzip, and drop the content into your Community folder, it contains just some older cockpit model files that were mistakenly changed with the 1.12.13.0 update

I will open also a Zendesk case for this bug

You should get this cockpit afterwards: 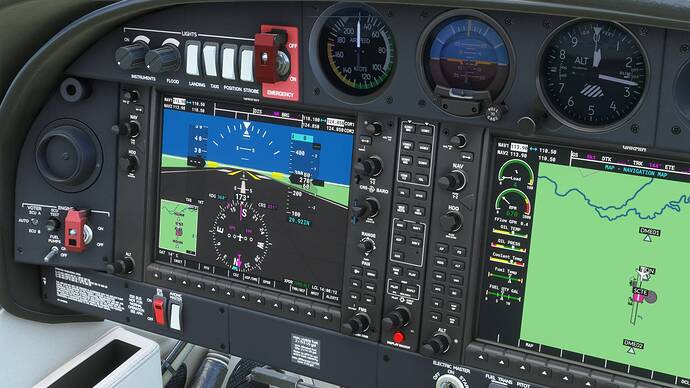 That’s exactly what I was looking for, just a fix for the Garmin and nothing more. Just perfect

So much thanks for that fix. you save my day

I hope in the Future ASOBO will fix this. I get also a ticket with that Issue.

My pleasure, thanks for your feedback!

Hope this will get fixed some day too

I can’t believe it, the bug was fixed with the last update

That I still have something positive to write here… Incredible!!!