Agreed. The silence on this is deafening. No acknowledgement that many folks can’t use the sim at all. Just all the usual empty the community folder talk.

Totally agree - it’s as if everyone has gone into hiding/denial. It really isn’t a good look at all. And it’s not going away - MS/Asobo have taken our money and broken MSFS for us. And now won’t even own up to their mistakes.
It’s obvious the development process is as broken as the sim for now.
Perhaps about time MSFS had opposition on the Xbox platform - that might focus some needed attention on our issues.
Very Poor Show

There is something odd about this one I admit… SU9 BETA worked flawlessly for me. And, I believe SU9 worked for a day or two before becoming 100% unusable – even with an empty community folder.

Makes me really wonder if some OS/Driver/Server thing happened that broke it after the Tuesday release. Also, pretty clear the problem is not impacting everyone which further suggests something about a particular system setup.

I’m totally tempted to do a complete wipe/reinstall but this is a lot of time and I have not heard that it has worked for others.

SU9 did not work flawlessly, infact that had CTD and was reported via the channels provided yet instead of pausing the release they just released it. Betas are ignored and not taken seriously, if they were then we would still be in SU9 beta.

When they first released SU9 BETA there was a compatibility issue with Spam.Next and FSUIPC that caused a CTD. They issued a hot fix a few days into the BETA and my system was fine after that. This really started a few days AFTER the official release for me.

3 posts were merged into an existing topic: Missing terminal building in Izmir

The fact that for some, me included, the sim, while not perfect, is working pretty well on SU9 and I didn’t have a single stutter or CTD on Xbox S makes me believe it is not some piece of code that went wrong or a SIM that is broken but there are other more complicated issues at play. To say they don’t care about it I don’t think is fair as I am sure they are doing all they can to fix it and will do it fast, as it is about their reputation and not only their bottom line. Another thing to consider is that reading this thread one could think that nobody right now is playing it as it is broken but I would not be surprised if the majority is playing without issues and do not comment in here. I would also be frustrated and respect the right to ask for fixes and for the sim to work better but it is a wonderful piece of software, complicated like there has never been one in gaming and as such it will go through hiccups and failures as it tries to improve and we have to show some more patience.

Hello guys… I am a developer and I have found the temporary solution. This applies only to the case of CTD with memory error message. My solution was to increase the virtual memory to almost 20 Gigs. This way the simulator works better and it doesn’t close when I work. I hope it works for you. 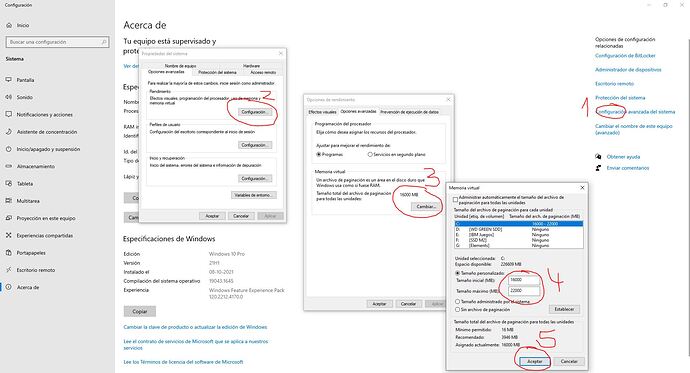 Virtual memory changes made no difference for me. My system has 64GB and I tried increasing virtual memory, moving it to different drives, and disabling it altogether. No difference.

If anything, the system seems happier with it disabled or managed by Windows.

there are cases and cases. For my part, I can continue working without any CTD.

I had the flickering cockp[it reflections. Changed cockpit windshield effects from Ultra to High and they went away. Not a fix because almost all reflections are just eliminated but better than the flickering.

Whats with all the weird flickering, glitching and pixellation at airports?

Just been at both Renton and Moscow and you can see buildings flicker in the distance and stuff glitching.

I’m on XBOX (Series X), and I noticed that immediately after SU 9. Image quality has absolutely plummeted. Horrible shimmers across the landscape, massive pop-in of trees and other 3D objects, even right next to the aircraft, and what appears to be a complete lack of anti-aliasing. Anisotropic filtering also may be missing, but it’s a little harder to tell if that’s the case (maybe because there are so many other image quality problems now).

There are so many problems with this update (and SU 8 produced some huge problems as well) that it is impossible that Asobo could have done any significant quality control on this release.

Well, the thing I never realized I would have to fear just happened. A project I’ve spent countless hours of my time on simply just crashes the entire sim now when loaded into the editor. Every session always ends with a crash, but after this crash I am no longer able to load my project anymore… GIven Asobo’s history when it comes to actually fixing bugs, I have to assume this won’t be fixed anytime soon and I’m forced to put this project on hold indefinitely unless I can somehow find a way of manually correcting it by playing with the file… I very much hope that Asobo will make some major changes to their software development practices sooner rather than later. We’re approaching two years now.

Interesting. How much physical memory do you have? (I am viewing this thread on my phone so I can’t really see your attached image properly)

Oh wow, reality check for me i guess: I’ve never EVER got stutters at Sedona (my favorite handcrafted by the way) and today after a long absence from it i decided to spawn there and i got FPS in the high and mid 20s with stutters while taxiing

Another day, another bug on the way from CDG to SEA.
When the side tanks are empty the system switches automatically to the main tanks.
Before today I have never had issue with that, but today it resulted an engine failure…
BTW, VFR map works sometimes, but mostly it is frozen…
Hotfix is needed urgently!

So after my previous post, I reloaded the game and I got ctd on world map…
Nevermind, I restarted it, and I successfully departed from JFK to CDG.
After 2,5 hours I got black screens and in 20 mins CTD again…
This game is a bad joke after the latest update…