Give it time. Resource Manager shows MSFS as not responding, but it’s still out there waiting for the network…

No, I participated in the beta and all I received after 479MB in the Steam client was a 520KB update, which is the AIRAC NavData 28-day cycle refresh.

Two things: did you confirm in the packages path that it’s pointing to your current Packages folder? And did you install your packages in a Custom Path prior to joining the Beta? The latter was a very widely recommended step to avoid complications leaving the Beta and getting today’s update.

It’s probably not pointing to the right place where you have the sim installed. Same thing happened to my brother around six months ago.

I was getting single digit FPS in Main Menu fresh from installing the update. Rebooting the PC cleared that, so consider adding that step to your post=patch checklist.

I had the same thing, but I pointed it to my custom D: drive path where I had my content (all but the base sim on that c: drive) and it only downloaded the several gigs of the latest update today. If you had all of your stuff on c: then yes that problem was disclosed on the beta instructions and you will likely have to reload it all (115gb). Ugh. Sorry if that’s the case for you…. Argh.

Yes , it did in the Beta at least. I will update the release tonight.

W00t? Airac update? Now that’s an update I have not heard of in a loooong time…

Removed myself from the Xbox Insider beta as per instructions and found a small update in Microsoft store. Completed that and loaded the game only to my dismay I have to install the whole game again, 111.52GB!

Why is it after over 1.5 years since release things like this are still happening? Really am at the end of my patience with this game! 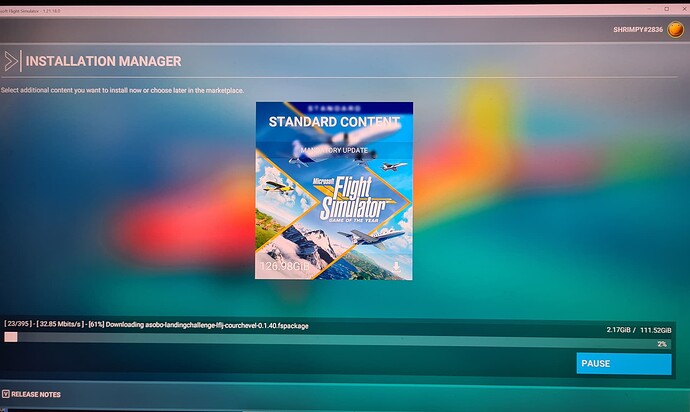 I’m getting the same. All other updating went well, but can’t update from CM without instant CTD.

Sim crashes when updating via content manager. Avoid this update all together until it’s fixed. Why is this even live if you can’t update.

Haven’t noticed it having been updated since it was last done in November?

You can’t avoid updating. Updates are forced whether you want them or not. You don’t have a choice in the matter. You either update or you can’t fly.

The update is broken.

Two things: did you confirm in the packages path that it’s pointing to your current Packages folder? And did you install your packages in a Custom Path prior to joining the Beta?

I did however closed the beta this morning.

Does it seem right on Xbox premium deluxe in content manager to only have 25 installed files?

Seems the enforced full update had wiped my community folder with the hundreds of paid and free mods. So now I have to spend many hours reinstalling everything and updating it all?

Seriously I’m done with this. It’s absolute amateur hour at Asobo. I always had faith that in the end a good product would come out of all this mess but clearly I was wrong.