You have market place functionality back ?

I’m just so overwhelmed. I’m getting even better FPS and overall smoothness than before. Thought that wasn’t possible. Asobo, you guys effin ROCK! The new short trip between those two little islands is fantastic, too =) Keep it up.

Just loading up to check, may take some time as I’ve loaded all SE England assets for a “see what needs trimming down” survey…[makes a cup of tea]…
Yes, I can buy things on Marketplace.

What free London City Airport are you talking about? I am not aware of one in the sim. Is this a community mod you are referring to? I know Orbx does EGLC but it is not free.

Even outside of the sim there are some major internet connectivity problems between Asia Pacific and west to Europe at the moment. Lots of failing Citrix sessions being reported by a large customer of mine and I’m seeing pretty much the same.

Marketplace is back, but in my case the small Uk update hangs. Downloaded the 23gb and 4gb updates last night.

not so sure, it looks like a zombie apocalypse apart from the buildings they have designed themselves.

I took off from the stock EGLC not a freeware version 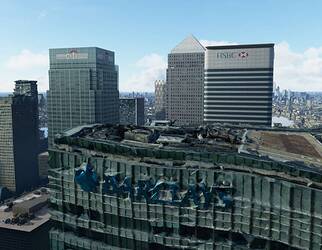 Flight models seem all over the place, or my controls need recalibrations. Can’t get off the ground without crashing from City

lol …looks like they integrated msfs with Dcs . Just hope they all got out alive

Performance on new photogrammetry in London is so freaking awful… it stutters like hell.

Does anyone noticed that too?

Is it just me or do half of the buildings along the river thames look really bad ? Got cranes and buildings which look like they are melting.

Performance on new photogrammetry in London is so freaking awful… it stutters like hell.

It’s much better for me this morning. I’m not flying as I don’t have my gear set up, but I took the drone up to look around. It’s about on par with what I had before, maybe a tad worse. My poor little 1080 does not like this one bit, but it does well considering, and smooth enough for controller flight, I feel.

Not what I saw yesterday at all, and I got no pops up today about slow broadband. I think it got hammered yesterday, and could not cope.

Hi Mort, cheers for the advice, that cured it!

Weird - downloaded the update yesterday, including the UK addon. Now this a.m. (once the servers came back on line) the UK addon had gone - redownloading now. If you think you aren’t seeing the improvements expected might be worth checking the Market Place to see if something similar has happened…

I am trying, guess it’s like everything… some good, some bad but overall it’s moved on since the original and… at least Blackpool now has a tower (piers are a bit lacking though)!

Wish I could check…
Bit difficult seeing as FS now refusing to see an internet connection despite the computer showing no issues. Ah well, at least i can still go exploring while I try and figure it out.

Anyone else having connection issues just with FS?