Yes, same here, still. The latest Update 6 has not really improved much for me, only marginally. Still the main thread is displayed as the limiting factor. It feels as if someone is standing with his foot on the water hose …

Yes, same here, still. The latest Update 6 has not really improved much for me, only marginally. Still the main thread is displayed as the limiting factor. It feels as if someone is standing with his foot on the water hose …

There weren’t any CPU performance optimisations in patch 6.
They originally stated there might be but they were cancelled, now due in patch 7.
As to why some people are seeing a decrease I can’t say. My experience after patch 6 is performance seems fine on my setup. Double check your ingame and gfx card settings have remained the same since the patch is my suggestion.

For me; lastest update is 10-12 FPS loss. Everything is same but after update I have lost some FPS.

same here - did not change any settings in the game (ryzen 5 3600, rx 5700) - had 40-50 fps on high/ultra and 2K. since the last 2-3 updates there is a major performance drop. now I am managing 27-32 fps without any changes. oh - there was a visual change - my volumetric clouds became pixelated and grany. the whole game became somewoh grany… dear delevopers, give us the possibility to return to former versions, because I NEVER had a game where update to update the quality AND the performance of the game got worse!

I’m working on updating my topic: My 2070 SUPER 4K settings and suggestions - episode 2

During my tests I believe they might have increased the buildings LOD ring distance slightly with the latest update. I’m not looked specifically buildings and trees but on a well known flight pattern I’m using for the above topic I kind of noticed building density is higher at a certain distance that before.

This might be one of the reasons this version is giving slightly less fps but this is I admit mostly speculation based on personal impression.

I’m looking forward to your update.

Although I personally experience an increase in performance, it remains strange and unfortunate many users are reporting the opposite. I noticed a minor increase in FPS but the game runs practically stutter-free.

Me too, but some say it’s a placebo effect…

All - I don’t know as this is the reason. MS I think (I cannot prove it) upgraded the “antimalware engine in windows defender) why do I say this. I have system Intel I-7-9750; 32GB Ram; Nvidia RTX-2070 8GB Vram; 1TB SSD Laptop, ASUS-ROG-Scar Styx III 17” 240Hz system, I have 32" Samsung curved Monitor at 1920-1080P hooked up HDMI port. None of the issues described here are affecting me. I have system set to bubbles screen saver at 40 minutes non use. Every time I come back to it, cooling fans running like crazy, and Task Manager says the above applet is running with very high usage. I only have 15MBPS connection to net, so it’s not that. But my Game time does not stutter, and there is a way to preclude Windows Defender from checking the game, so far I have not changed that. As reported some users in this thread have even higher powered system than I, so it must be something internal to windows causing this I think. I am seriously thinking allowing WD to exempt the game might speed it up and fix reported issues in this thread. I do know early on up till recently some aftermarket firewalls/antivirus programs did affect sims operation, blocked downloads, etc. I have no community stuff other than the IFR Academy. Oh, only had 2 CTD’s since game release. A couple of “insert disc x” and one time the altimeter knob in the 787 went bonkers. The logbook has failed to give me credit for flight time and landings completed at night. Cannot fix it, and cannot delete entries where sim caused flight to crash, so stuck with those. When I want good experience, I go back to FSX. JMTCW.

When Windows don’t have any sign of user activities it start several processes thinking it ill not annoy the user. You have the anti-malware obviously, the de-fragmentation of HDD and optimization of SDD, the indexation of all files in your computer, etc. and all that vanish more or less quickly when you move your mouse. You can keep the task-manager sorted by cpu times on top of your sim and check this after a while without touching anything.
I think that the “Game Mode” of Windows is partially made to avoid this. You should try if you didn’t yet…

Yes, this does turn off some annoying features of Windows 10 as well as puts some resident programs/apps to “sleep” sort of speak. Also in the Gaming Mode, is the option of adding MSFS to use “High Priority” with GPU and Windows 10 power settings.

Yes, was aware of behind the scenes windows 10 checks and processes. Game mode is on, I set MSFS to high priority in task manager. I also did and set Nvidia Graphics Card as default device for game to run under in Nvidia’s Control Panel. Not sure it really is being utilized all the time. I followed guide in A Guide To Flight Simulation manual I purchased. I was remarking “on system performance when NOT flying game”. There is a way to let MSFS be exempt from Antivirus and antimalware checks, which is supposed to speed up the loading time. It takes 2 minutes (guess) to get from click on icon to main screen. It’s the thing that takes the longest to load on PC.

This was the High Performance area I wrote about. It’s in Windows 10 Settings, Gaming, Game Bar, then “Graphic Settings” (a text link upper right of that screen) 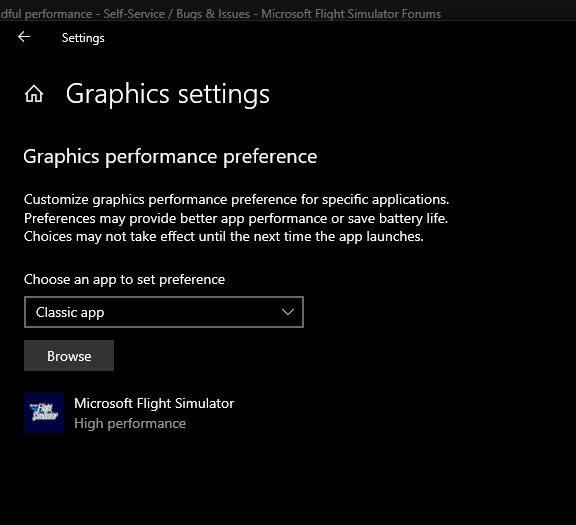 Thanks for that - I have pretty good FPS and general graphics quality but its always worth optimising any settings possible. I have just done this. I see that it looks like Win 10 is set up for laptops - mention of power savings - battery life vs performance.

Hester - Yep, had that set.

You can download this guide for free. It seemed to help with some stuff.

well, I have a much better performance after the update, but hey, it must be the “Asobo” effect…

I think the new word is born. Plasobo.

I’ve a ryzen with 8 cores and 12 threads and In FS I am already limited main thread. why ???