This sucks indeed!
But it is nothing new, they give more importance to the giraffes and flamingos,
than to fix what it is really important in a Fight sim worth of this name…
The only thing that gives me a glimmer of hope is that it seems that they are trying to fix
it, albeit at the moment breaking it even more…
You might be interested in my thread:

i get the same thing , total freezes for 20 to 30 seconds (sometimes longer), and its a total killer of immersion. my processor runs fine and all other programs don’t stop, it’s just MS2020 locks up. Frame rates atrocious at times… 6800K (4GHz) , 2080Ti, 32GB, Samsung Pro SSD M.2, 34" Ultrawide w/G-Sync, GPU never maxed, CPU never maxed. Good VR experience except for these occasional freezes sometimes lasting up to a minute. Unfortunately, no one else gets these freezes, so there’s only the two of us experiencing it. Fat chance it will get fixed.

Take a look at the Windows Error Log for these long pauses. There are timers inside Windows uses to monitor problems with device drivers or services. Drivers and services usually are coded to restart themselves if they crash. It takes some time for a driver to restart after a crash and Windows doesn’t have any visibility into 3rd party drivers and must rely on timers. If a driver can restart after a crash before the timer expires, then normal operation is resumed. During the time from the start of the driver failure to when it recovers the PC freezes because it needs the driver to run. If the Windows timer expires before the driver recovers, Windows assumes the driver has crashed and not restarted. Windows signals to the program, MSFS in this case, that the driver has failed and not recovered causing an immediate CTD.

Sometimes a driver might crash and restart several times in succession before running correctly. Again, if these restarts exceed the Windows timer, a CTD will happen. It is possible to mess around with the Windows timers changing the time from 20 seconds to 3 seconds. This means no more 20-30 second freezes. Instead, a CTD will happen at 3 seconds. This is a lousy choice but no matter what, something is breaking somewhere but in your case restarting. The error log can provide valuable information. If there is a driver that is failing/restarting and is from a 3rd party vendor, you will need to contact that vendor for support. If the driver is from Microsoft, look for an optional Windows Update. Windows usually does not automatically download optional updates.

Ahh, good point. I will indeed do that and hopefully I will find something. I will look specifically at the “Application” Windows logs, thanks for the tip, it’s a good one!

I have just read that this is often off by default - i have enabled it and gained 1-5fps by allowing my card to manage its own VRAM instead of the OS - The feature was introduced in the Windows 10 May 2020 Update.

but, as we mentioned… be carefully with HAGS. Some users get a beneffit, other users strange issues.

This and all the other tweaks (and believe me I have tried EVERYTHING)…
do not resolve the stutter issue.
The problem lies in the faulty graphics engine of MSFS.
I was hoping this should be clear by now…

I am not an expert on the forums, but i agree DX12 should fit alot of issues and some further optimisation and use of multi-core and threads would greatly benefit.

Dont render scale to 200%… Dont set everything to Ultra… What happens then? Just default 1080p medium…?

I’ noticing that frame rates are stable for about a minute but after that it drops to about 10fps. Anyone experiencing the same?

Some people say that they are not experiencing any stutters playing FS2020. That’s funny because the stuttering is just there, permanently all the time and you cannot avoid it. There is not one single YouTube-video of this game without it. Some people just don’t care about these micro-stutters as much as others but - nevertheless - you cannot get rid of the stuttering. You can even see these stutters in the Trailers from the Microsoft/Asobo-Studios… (for me this points out that this is a pure software-problem and not a hardware-related issue)

I run the game with mid to (mostly) high settings (avoiding to fly over big cities) with constant (!) 60fps (1920x1200, Ryzen5 3600, RTX2070 Super, 32GB 3200DDR4 Ram, M.2-SSD, TrackIR). Every (!) other game works smoothly with such a “high” and constant framerate - but not FS2020. The stutters are still there, even with constant 60fps and they are very annoying. Every single stutter reminds you that you are not flying a real plane and that you just sit in front of a (…very bad optimized…) simulator!

The graphics are great, no doubt, but as long as this problem exists this is just worthless. I don’t know whether the updates or the newer graphic-drivers made it even worse, but with an earlier nvidia 457.30 driver it was not as bad as it is with every newer driver (and/or with the newest updates).

Some may say 30fps are enough for a flightsim, but that’s just not true for everyone and - even more important - that’s not the point, because the microstutters of the FS2020-graphic-engine are always there, with constant 60+fps just more noticable than with just 30fps which stutters permanently anyway.

You first have to experience other really smooth sims (DCS, …) to really appreciate a smooth flying-experience - this is (at the moment) just not possible to achieve with FS2020 and that is very unpleasant because the potential of flying over all regions of the world in such a high graphic quality would be very desirable. (I even would prefer worse graphics just to get the sim smooth all the time. Reducing the graphics to low-quality-settings doesn’t help…)

I think this problem should be solved with highest priority, it’s more important than any bug-fixing or to add some new features or planes.

This problem kills the whole experience of flying with FS2020!!!

Some people say that they are not experiencing any stutters playing FS2020. That’s funny because the stuttering is just there, permanently all the time and you cannot avoid it.

it is not funny if people tell you here experiance with MSFS, as like as you do same.

Visually very promising but really bad performace-fps. For VR, it needs to improve a lot. I can’t have a smooth experience and I have a 9900k 5ghz and a 2080ti. With other games and simulators like dcs and flyinside the experience is great.

COMPLETELY AND ABSOLUTELY agree with your post! THANK YOU!

Unfortunately there is still people out there, including the developers,
that have STILL not noticed that the graphics engine of MSFS is FAULTY,
and no matter the tweaks, settings or rigs, it just STUTTERS, as you
rightly write! They have dedicated far more attention to giraffes, flamingos, POI’s
and whatnot than to the very basic and most important issue, a fluid simulation…

Stutters… this is my biggest thing. I’m finding that performance seems to degrade during flight. My system will be rock steady during departure, climb and cruise… however, during the arrival I’ll begin to notice stutters and by the time I’m on the ground the performance isn’t the same. I’m running a pretty beefy i9 9900k OC 5GHz, 32GB RAM and a 2080ti. Plenty of others have complained of this. I’m convinced this a problem with the SIM and not hardware.

Hey don’t forget MSFS is not using the features of our graphic cards that are available. It’s like you have 64 GB Ram but working with windows XP 32-bit. So without changes in the MSFS graphic capabilities none of our expensive equipment will solve the problem. It’s like driving a Porsche in Manhatten - no need for speed. Guido

Hi, I have recently started to play MFS2020 on a Precision 7740 laptop, it’s reasonable spec’d,

With no other programs running and windows and my anti-virus running in games mode, I find that MFS2020 is unplayable, even with setting all down to minimum. The screen is jerky as hell and I keep getting constant but random popping from the speakers. When I look at the GPU in task manager it’s quite erratic, (Seen in Image). However, after approximately 25 minutes of play, on autopilot, the play suddenly smooths out and I can ramp all the setting to ultra and everything seems fine, when I look at the GPU the graph displayed is settled with the occasional blip. I known the RTX 3000 utilises DirectX12 and MFS2020 is only ultising DirectX11 at present, could this be the cause? 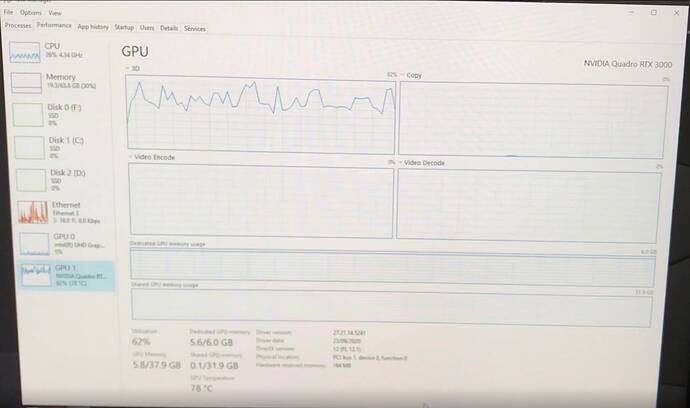 You can do whatever you want, it just stutters and is jerky, as you write.
I am utterly astonished that it is STILL not clear that the graphics engine of MSFS is badly programmed,
and no matter the tweaks, settings or rigs, it just STUTTERS… “jerky”…

and again a sentence from you “clipboard”.

Just all your posts within this forum are the same… possible you should think bit more about helpfull content within the Bugs&Issues categories.