Does anyone else here have issues with DD? Before anyone asks, yes I have been in their support forums and no, theres been no help or solution to their products.

There is no doubting the actual effort that goes into their sceneries, none whatsoever. I started with Krakow scenery when I first got the sim, then Seattle and a few other smaller Polish airports, all good. However Ive found as time has gone on their sceneries are less and less optimised.

UUEE for example, looks great, lots of detail but is an absolute FPS killer even on a high end system like my own. I have posted time and again for this to be addressed as have many others only to be met with a shrug and a ïts fine when we test it". Obviously its not fine because other people have the same issues. i also had the issues on xbox which you might expect but on a high end PC? it has to be their scenery.

So you think ok, thats just one scenery and so you buy a few more sceneries thinking it will be all ok. Well Chicago Midway is a lag fest. i wouldnt mind but the size of the airport - I have more complex airports in Fly Tampas Athens and Vegas that dont perform this badly. lag, lag lag. Then you get Chicago Landmarks, im getting 12 FPS!!! What is going on? And whats worse we cant get any answers. Ive had to uninstall these sceneries as they absolutely kill my machine and its a shame because its in place I like to fly.

Does anyone else have issues with their software? Seems to be getting worse with each release!

I have the DD Washington National Airport (KDCA) and Washington Landmarks. I have no problems with either. I don’t exactly have a powerhouse for a PC, but it’s no slouch either.

I always fly in VR and get a steady 30+ fps with medium to high settings in the sim.

No problems at all.

If the airport is killing your frame rates, you may not have enough VRAM, and your vid card is using virtual memory swaps (with RAM and/or disk-based VM) to load all the textures.

I’m only having their Narita airport and i don’t have too much problems. I’m running an old GTX1080 and a Ryzen 7. It’s running well despite some AIG traffic running at the same time. Thank god i have 32GB RAM because it’s hitting 16GB when i’m at the airport.

I have Chicago, Seattle and Washington. While my fps at Washington is great, I too have big framedrop at Chicago and especially Seattle. So maybe these two are poorly optimized. I haven‘t for a long time tried to fly at Chicago or Seattle without their scenery. Maybe its a general problem in those areas. I don‘t know.

DD is one of the best dev so far in my opinion.

I’ve been using Chicago Landmarks without issue. The performance is smooth enough that I can easily maneuver between buildings. 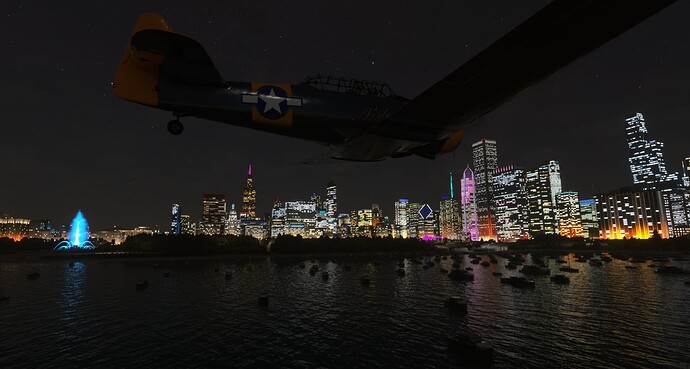 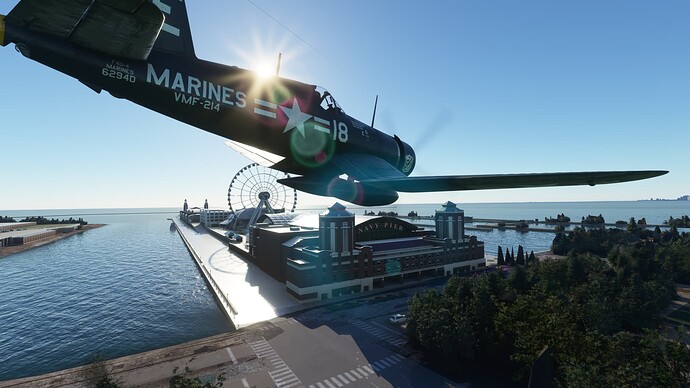 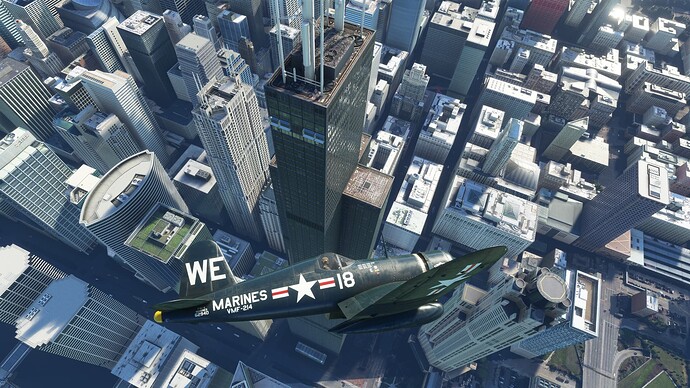 I’m wondering if the scenery is exceeding your system or video memory? That would cause a huge hit on the FPS, and it wouldn’t surprise me if some of these ultra detailed scenery packs are pushing the limit there. Especially if it’s being coupled with other nearby add-on scenery like Midway or O’Hare.

I absolutely agree with the topic here. I am on Xbox series x. I have had the same experience getting the run around and back and forth from DD at their forums and MSFS. nothing is getting fixed apparently. I have Narita and Moscow Airports that do not work at all. unusable. CTD crashes the sim every time I am there. Chicago landmarks there is some strange LOD problem with the downtown buildings morphing into odd shapes when viewing from a distance or up close in any way I view it. I have them uninstalled as well, I really like these places as well and I hope this is fixed asap

Agreed with the ops post.Performance is absolute bananas at KDCA and Chicago City pack. I do also have Fsdreamteam KORD.
I own their Seattle pack and that runs with no issues.
I’ll probably holding off on getting Midway.
I think my issue is my card has only 8gb of vram but seriously I own Fly Tampa, Fsdreamteam , LatinVfr and those products work perfectly fine.

Sounds like there could be conflicting scenery mods particularly if both cover or partly cover the same area. If you disable or delete one be sure to refresh your rolling cache inbetween tries. There is also a fair chance that reversing the install order might fix it.

While I do feel an FPS drop, I think it’s still fine for me. But I do agree about your point in regards to their QA efforts.

The first one I bought from them was RJAA Narita Airport. While they do look really well, I had a lot of issues in their initial release version:

Then a friend of mine bought their UUEE airport, and they reported the same issues as above.

I’ve noticed these days more developers are moving over to 4K textures, resulting in extremely large texture files. That may be fine for folks with a lot of VRAM in their GPUs, but those with previous gen GPUs will struggle. I’ve noticed medium sized commuter airports with texture folders larger than some entire city add-ons. I mean, not only are airport buildings being modeled, but now entire interiors are being modeled as well.

It’s possible this is the way it’s going to be from now on, with the only way to get better performance would be to upgrade to a GPU with more VRAM.

I’ve noticed these days more developers are moving over to 4K textures, resulting in extremely large texture files. That may be fine for folks with a lot of VRAM in their GPUs, but those with previous gen GPUs will struggle.

Don’t they have subsampling texture resolution in relative to the graphics settings that you use? I mean, they could build the airport using 4K textures, but if your graphics settings are set to use Low/Medium Texture Resolution, then they should be scaled down to only 720p textures, no?

Honestly I’ve never tested that. Besides, I personally wouldn’t downgrade the entire sim’s graphics like that for one or two add-ons.

But as @DaveR44 mentioned above, if you run out of VRAM, your PC will begin writing to shared VRAM on your drive to load the entire scene. I’ve witnessed this many times by just panning my camera towards an airport that uses such high quality textures that there’s a noticeable and delayed freeze in the sim.

I don’t mean you downgrade the entire sim’s graphics for one or two addons. I mean your default setting in general. If you have previous gen GPU, then you probably won’t be setting it up at ULTRA texture, in the first place already right? If you’re already using Low/Medium just because of your previous gen GPU, then all airports should render at that resolution anyway.

I think it shouldn’t matter what kind of texture resolution they’re built from, what matters is how the scaling works depending on your graphics settings. Obviously, if your hardware is strong enough to use ULTRA texture, then the entire detail would be rendered as such. But if you’re already using Low/Medium setting, then the texture should already be scaled down anyway.

It’s not about changing the setting for each airport. It’s about standardising the nature of the scaling in general across all airports. It’s something that should already be thought of by the developers in the beginning.

I don’t mean you downgrade the entire sim’s graphics for one or two addons. I mean your default setting in general. If you have previous gen GPU, then you probably won’t be setting it up at ULTRA texture, in the first place already right? If you’re already using Low/Medium just because of your previous gen GPU, then all airports should render at that resolution anyway.

Not necessarily. I have a 2070s 8gb vram rendering at 2k, have all settings on ultra, locked at 30fps. I can maintain that with most add-ons except ones that start pushing that 4k envelope.

It’s my 8 gb of VRAM that’s limiting me with some of these add-ons for sure.

I want to confirm the OP’s observation that DD’s newer products don’t perform as well as their older ones. Chicago Landmarks is particularly horrible as far as FPS goes. Strangely, the worst-performing area of DD Chicago is slightly south of downtown, where the scenery appears far less dense than directly over the downtown buildings. If you even view this area from a distance – not even flying over it – the FPS falls off a cliff. By contract, an earlier DD release, Washington DC Landmarks, works beautifully on my machine, despite the scenery density being even more detailed. FPS is fantastic. DD Chicago, very bad. DD Chicago at night is even worse. It looks great, but runs very poorly. As others have said, I too deleted DD Chicago because it was pretty much unusable on my machine, which has suffered no such problems with any other add-ons. I keep hoping DD will optimize their more recent products to meet their high standards from previous years.

I’m certain you’re right however a 2070s isn’t quite recommended high end spec so some might consider a texture or two down to high as a reasonable compromise. This is probably the only thing for which my rtx3060 12GB has an advantage.

Because some other devs shun 4k textures doesn’t mean that DD should.

I don’t understand why my system that has 32gm Ram and a Video card with 8GB of ram could not render a bunch of buildings. There are sceneries that have far more to them than this, I mean Samscene Hong Kong for example runs absolutely fine and theres tons of buildings in it.

How come I can run Dying Light 2 maxed out with lots of detail, but flying around a small portion of Chicago kills my system? Obviously uninstalling this scenery restores the FPS by just using Photogrammetry. It surely has to be about optimisation?

I have to also say in their defence, the effort on detail is great, no problems there thats why I was buying their add ons but just lately the crown has started to slip and its a pain to go through a refund process.