Enormous arc towards the Intermediate Fix (IF)

Nope, I tried everything. I can select the arrival and it shows ok, as soon as I select the approach it will come up with this weird arc. Punching the arrival in as individual points behaves the same upon selecting an approach.

The other way around, this one does not have any discontinuity, C172 steam gauge selected: 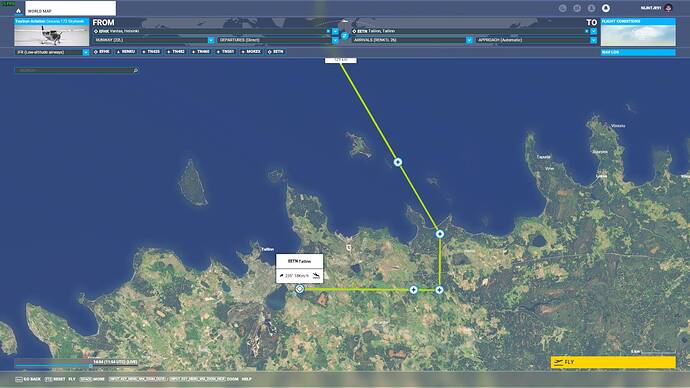 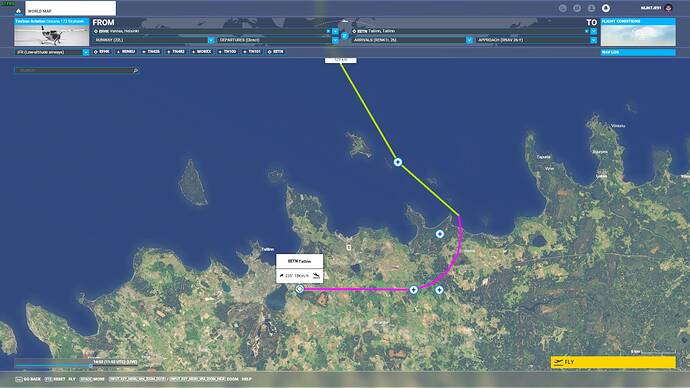 Looks about right. My interpretation is as soon as an approach is loaded, it tries to create a “smooth” track to the initial approach waypoint, aligning you with the approach direction by this waypoint.

I assume this is the IAP waypoint? 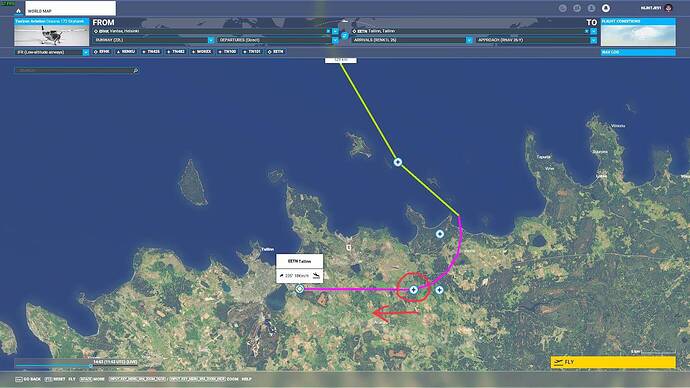 It seems this “curve” is a fixed value too, and is not affected by aircraft type. Whether in a 748 or a 172, it calculates the same path. Basically this has all the realism of a $5 iPad flight sim.

Well it’s early days, and these are hard problems.

Happens everywhere there is no straight-in. Dubrovnik:

Instead of finishing the SID, flying over (or fly-by) the LOKRU point to the first point on the RNAV approach it creates a fly-by where even the SR71 could turn easily within when flying at MACH 3 (well not really maybe). 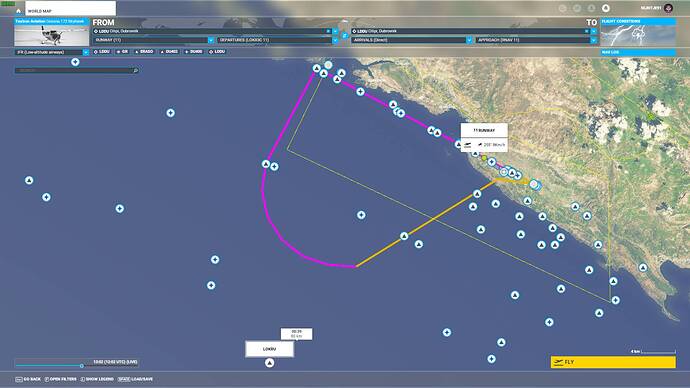 I like your optimism, but frankly for a product that claims to be a serious simulator, this isn’t really acceptable. No other version of FS or XP (since gps has been included) has ever had these gross flight plan inaccuracies, and that’s going back 20 years.

Yes it is. I don’t understand why it needs to approach the IAF different than any other waypoint. It is able anticipate the turn radius and fly-by en-route waypoints just fine. Should be the same for the IAF … A waypoint is a waypoint …

On the world map there is no turn anticipation shown for any other waypoint if no approach is selected as can be seen below. Why all of a sudden this SR71 MACH 3 turn radius to the IAF? 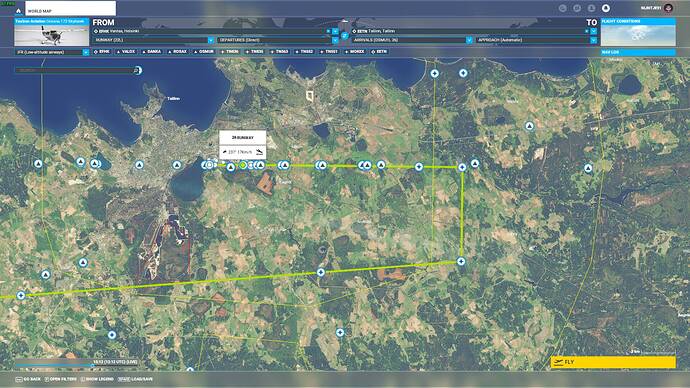 What is this even? 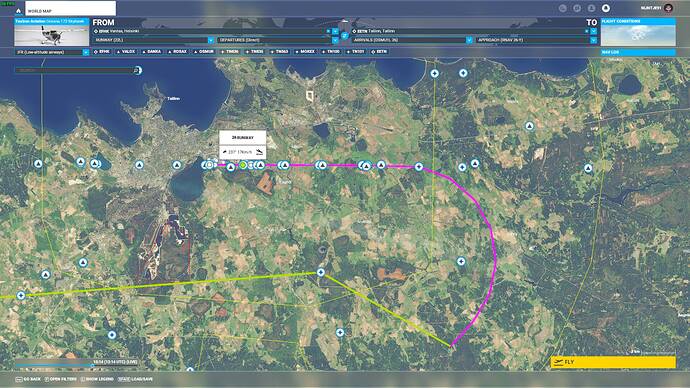 This is why Working Title is replacing the flight planning logic of the sim with each improved embedded version of their own starting with the CJ4 and the NXi NavUnits. The large arc is a workaround by the base sim to emulate the tighter turns required by a given approach, primally because the logic makes them fly to make a pass over the nearest Navpoint as a reference.

The CJ4 and NXi, when coupled to the AP can easily and properly fly those tighter turns correctly without having to perform a flyover. As well as understanding procedure legs that the base sim code doesn’t understand, like Holding Patterns.

The G3000 and G3X are still on the roadmap for the same improvements CJ4 (Really a Rockwell Collins ProLine 21 FMS) and the NXi have. So for now, even using WT’s version of the G3000/G3X, they are still subject to the base sim planning and flight execution noted in this thread.

But is Asobo planning to do anything about it? I have no doubt WT will fix it in their products, I guess this won’t affect the World Map for example. Somehow even the default G1000 or 3000 can fly any arrival or en-route segment just fine, with the correct turn anticipation. Why all of a sudden this enormous arc, almost bringing the aircraft into orbit?

I don’t know. I do all my FPL outside in LNM, import it into the sim - nod at the defects it imposes on the world map, but am pleased to find that when loaded into NXi, it accurately looks like LNM.

WIP is what I would say. Perhaps SU6 and SU7 will bring more changes systemically. It does say that on the feedback roadmap for G1000. You may want to ask in the G1000 NXi master thread. Matt is very transparent.

I just hope that the underlying base logic gets an overhaul. Without it, every single third party developer has to either rely on using WT upgraded avionics, or develop their own flight plan system, if they a want correctly implemented nav system. Not to mention the main MSFS flight planning maps will always be incorrect and at times unusable.

I really think this should be a high priority, despite the amount of work it may require.

Maybe the ARCs would be more acceptable if they were calculated for the current aircraft, and its standard rate turn at cruise speed.
At the moment, it seems to be fixed on a curve suitable for a 747 !!

Not even that, a 747 can easily fly the procedure in this thread…

Arcs are not needed at all, regardless of aircraft, nor are they correct. As long as turn anticipation works for fly-by waypoints, which it does, the current implementation is not even required.

Arcs are not needed at all

100% agree. To me, this seems like a classic case of a programmer designing something they have little or no real world knowledge of, and just imagining what might be “Un fantasme sympa”

It is a Fantasy Idea, better suited to a Fantasy game than a “Flight Simulator”.

Just voted as I find this extremely annoying as well.

What you can do to workaround this is when flying, switch your AP to use HDG instead to maintain the course you actually want and then activate the leg for the waypoint after the IAF once established. It’s annoying, I know but not horrible if ATC is already vectoring you with headings anyway.

Another thing to try If you’re importing from LNM, chose the export option “Export waypoints for approaches”. Then when in the World Map, chose your departure and arrival airports, chose IFR, and select automatic for all approaches and load the plan. It should load with just the waypoints without defining an approach. The only problem with this is that the GPS won’t recognize it as an actual approach once you’re in the air so you get no GS or localizer unless you load the approach in the GPS after the fact.

On the WT CJ4 World Map, I select my flight from KJFK to KEWR. 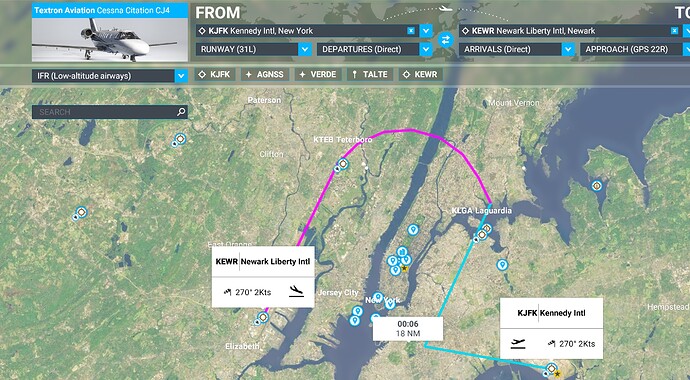 The Waypoints look okay.
But when the plan is input into the FMS, a strange set of LEGS appears. 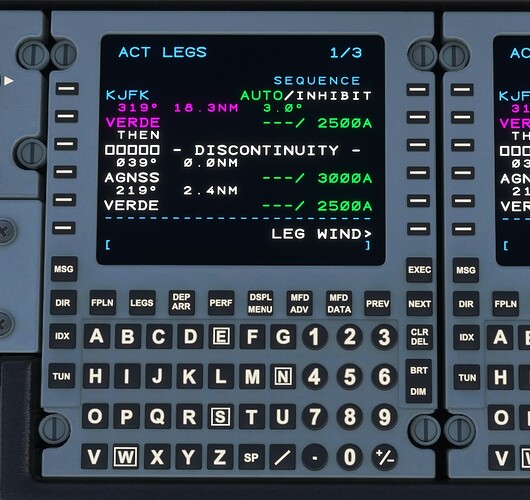 The AP will now flies direct to AGNSS. 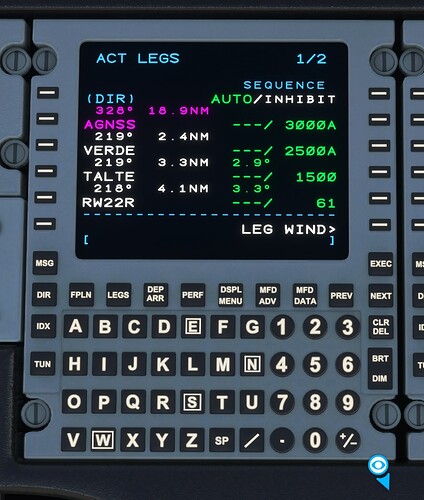 Note: The screenshot shows the selected approach as GPS 22R.
I clicked it wrong for this screenshot.

I always select IFR 22R. It displays the same ARC.

If it’s any consolation, it enforces these for VFR flights now. I didn’t even select an approach, it was supposed to be direct, but the sim knows better it seems.

I have seen the same problem. If I plot a direct course from KNPA to KNEW, for some reason its not as direct as it first appears. Here’s the departure: [image] At roughly the mid-point there is a dog leg: [image] And at the arrival: [image] It looks like despite having a direct route, its actually putting in some additional routing for you. If you change the destination runway, the route changes. And it gets worse. If you instead choose a parking spot as your destination, then the r…

Hi Nijntje, yes the fly back bug is different, however I would guess these are all interconnected and need an overall new Flighplanner approach. I might be wrong though.

I did not systematically investigate these bugs, but observed them in various scenarious e.g. Default TBM/G3000, WTG3000, FBW A32NX Dev. Version from last Sunday, Default A320 … basically all planes / GPS / FMCs which are based on the underlying MSFS Flightplanner.

In my oppinion they are all somehow interrelated and this is probably why FBW, WT, (Aerosoft CRJ?) decided to completely start newly.

However, I dont want to derail this thread as it was focused so far on the first point.

Njintje you decide as OP if to also include the other observations or keep them separate from this thread. 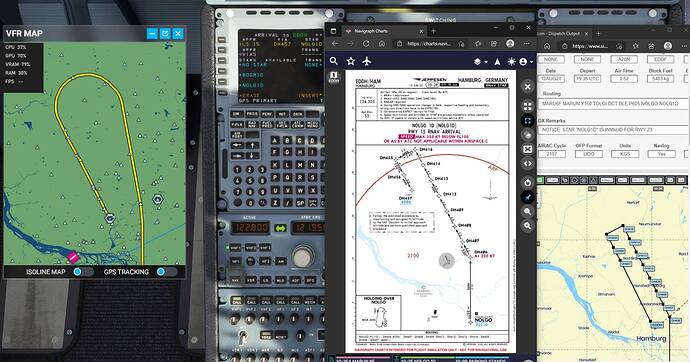