I try to explain the problem once again, because there still seems to be a lot of confusion. Yes, when you directly look at a bright spot in the scene, there isn’t much difference between before and after SU10. The difference is when you look down into a cockpit to fiddle with instruments etc., because the contrast is so extreme on a sunny day:

This is what it looks like with SU10 when you look down into a dark cockpit to do something: 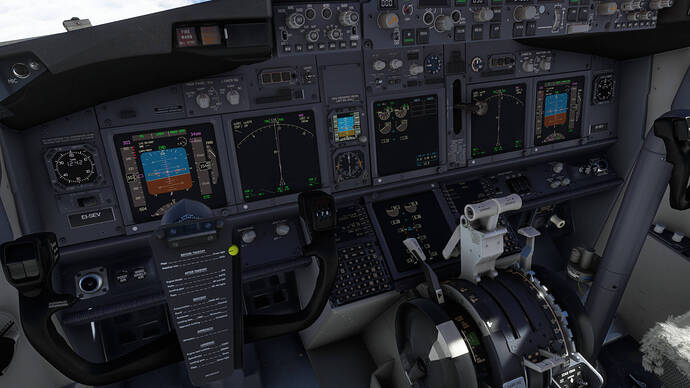 And here is what I used to look with SU9. This is an edit of the above image to approximate what it looked like to make the difference clear. 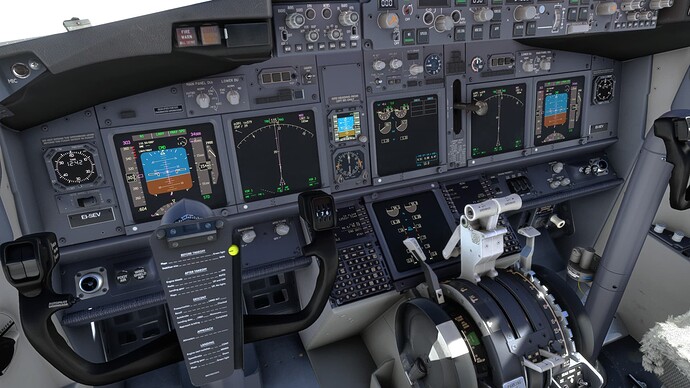 For those who do photography: that’s an exposure difference of 1 and a half stops, meaning the cockpit brightness has been reduced to less then half of what it used to be, looking down.

Here is an actual SU9 image for reference: 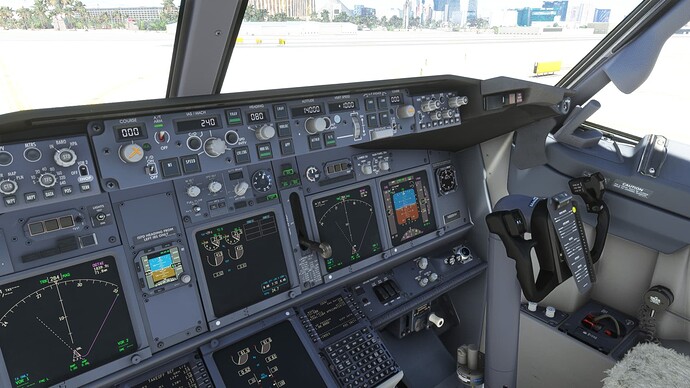 It’s among other things a “quality of life” thing that they took away. It’s more cumbersome to operate the instruments in the 737 now. And I’m most definitely not going to mess around with my gamma settings now, when I didn’t have to for over two years and in no other game.

Now also a screen with zoom only on cockpit…

Anyway, I’m done explaining the issue. I did the best job I could. It’s obvious that many people don’t understand the issue or do not care.

will try to find different spot

And we know the effect is changed, but makes it the game unplayable ? no…

Why devs decide to lower the effect and not give users the slider, we can only guess. May be it is only a side-effect to fix the VR issue and the wish was’nt just not in focus/known.

PS: I assume lots of other users like the new softer effect, because they no longer see only “white” if they look outside the window. Therefore the slider is important, otherwise the pro-and-contr disucssion will never end

IMHO the second picture is overexposed for the inside, as well as for the outside. The first, darker picture looks fine to me but I can see how splitting the difference might look nice.

Wouldn’t it be nice if we had exposure and contrast controls in the sim so we could tune it how we like it, without anyone else making a decision for us?

( ah… and all cockpit lights off )

and now I catched a good example where we see that the cockpit become brigther, because the Eye adaption still exist

It’s not fine, it’s on a bright sunny day. The second picture is what it would look like with all the ambient light bouncing around in the cockpit. The first image looks like it’s after sundown or on an overcast day, not like at midday with clear skies.

I’ll have to take your word for it. My eye still says first one’s only a smidge dark, whereas the bright one’s wayy too bright. I could be wrong though!

The SU10 image looks spot on. If it’s about realism, you would have on sunglasses if flying into the sun, and the flight deck would indeed be somewhat darkened. Leave it as is or provide us a slider.

Based on all the answers here the consensus is that 50% like it and 50% want it back. I believe the slider/option is the best way forward.

That way everyone get’s what they want and can enjoy the sim.

The question going forward is how can we bring this to Asobo’s attention?

Somebody tried to post a vote thread on the issue, but unfortunately the moderator closed it down. I also tried to bring it to one of the team’s attantion, and the moderator edited-out that too

well… may be because the mentioned wish topic still exists

We know eye-adaption was not removed and so the wish to make it customizable is still valid and waits for votes. More votes on that existing wish give a higher chance that users get that feature.

Add me to the list that prefers the SU10 look. When flying it is important to monitor both inside and outside the cockpit simultaneously, and so maintaining a consistent, stable light level is more important that prettier contrast ratios. It’s still awfully pretty. Everyone saying “ugh it looks like FSX now” needs to boot up FSX for a bit because no it sodding doesn’t.

That said, I’m all in favor of a slider so the effect may be seasoned to taste.

We should definitely have a vote. Most people like the new feature but they also agree that a slider should be present so everyone benefits.

This Wishlist item below is probably of interest. Recommend you review, and if in alignment, participate and vote. Thanks!

Hi there, I feel the dynamic brightness effect of the cockpit is way too strong. If I am looking straight forward, the surrounding looks nice, but instruments are hard to read due to a low contrast. Technically this may be correct: Take a picture out of your car, half instruments, half outside world. On the photo you’ll find your speed indicator is quite dark, due to the bright outside world. The outside world is much more luminant in absolute brightness, but our eyes adapt very fast and d…

That wishlist is arguing for what we now have in SU10.

Given that the topic is so divisive it’s clear that the only solution is to make the effect configurable in the options.

Once again the only way going forward to bring this to attention is to make the eye adaption a configuration option as a wishlist item.

That wishlist is arguing for what we now have in SU10.

my english is worst, but google translator tell me, that this is exactly about what we speak here:

It would help a lot, if the dynamic brightness level would be adapted, or even better - if the
user would have the ability to adjust this.

You know you can disable eyeadaptation in the usercfg.file right. You cant adjust it, but you can turn it off all together. Its under postprocess effect group. If your using VR make sure to turn it off in the VR section as well.

The other topic is based on the opinion that there was too much eye adaption, meaning the environment is too over-exposed when looking at the instruments, and vice versa. As can be clearly seen in this post.

Asobo appear to have responded to that by reducing the effect and lowering the overall exposure which fixes the outside environment, but means that cockpits are now ‘too dark’.

For those claiming the effect has been ‘removed’, it’s still obviously there. The left of this screenshot was taken with the camera pointing straight out of the window, the right with the camera panned down into the cockpit. Change in exposure is clear, just much less than pre-SU10…