with the new beta update the PFD in the aircraft no longer displays dynamic numbers in most fields. 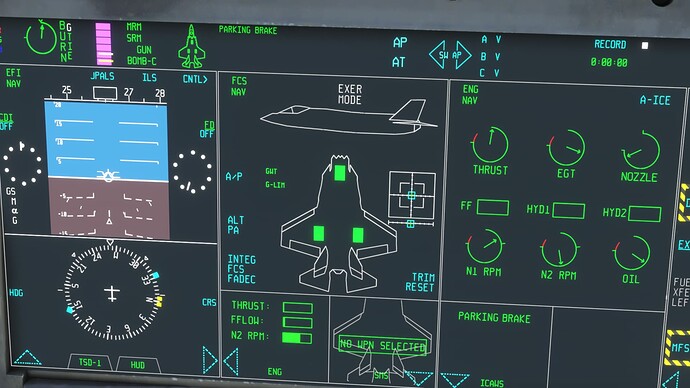 start a flight with the aircraft

This is Dino from IndiaFoxtEcho.
After looking into the problem, it looks like 1.27.13.0 NANO VG XML text renderer does not work as the previous iteration.

ANALYSIS:
OTF fonts (rendered with generic fonts) seem not to render at all in 1.27.13.0 causing most past of the screens to be blank.

SOLUTION:
We expect that F-35 1.1.1 works as intended: starting frmo 1.1.0 we have removed OTF fonts and replaced them with TTF ones. Users should make sure that the older version of package is properly deleted before installing the new one.

Another solution is to temporarily disable NANO VG in the EXPERIMENTAL menu.

The aircraft can catch the glide slope and bring me down for ILS landing if I keep my airspeed at 250 KTS but not below that.

ATC is telling me to keep my air speed not above 210 KTS for ILS landing. When I follow ATC’s guidelines and enter 210 in the Speed Hold box in autopilot on the PCD, the aircraft nose dives, Altitude Hold mode remains active. It is shown in white text.

Reinstalling the file did not produce results. This wasn’t an issue with the previous version of the F-35

Good day - please contact us directly via Facebook or via email. This post is for SIM UPDATE 10 BETA feedback only. Apologies for being so rigid, but it I think it is important we keep the discussion on topic to get a better sim.