Have anyone tried if the new F/A-18 is capable of supersonic speeds?

I don’t think so, at least not in level flight.

I am free to be corrected here and kind of hope I’m wrong, but at full afterburner 30,000ft, I think I was somewhere around 600-700 kts. Is the speed indicator showing true airspeed and not indicated air speed? If it’s showing TAS then I don’t think I was supersonic.

Maybe they will add it in the TopGun update.

It will easily go super sonic with afterburner, just like the real one. Keep in mind that very low its really not easy to do. But above a few thousand feet, it will.

As far as I know the F/A-18 can’t supercruise (maintain level supersonic without AB). And the sim does the same, if you are supersonic and shut down the AB, it’ll quickly go sub sonic (except in a shallow dive)

What does your airspeed show when you’re at full throttle, with afterburner, level flight, at 30,000ft? I did not appear to be supersonic when I tried.

You really can’t use airspeed to determine if you’re super sonic unless you have a graph handy. Its not the same at all altitudes.

In the F/A-18 if you look in the lower left of your hud there are a few numbers there, The one with the G after it shows how many G force you’re pulling… The one with the M is your mach number. Anything greater than 1.0 is supersonic regardless of airspeed or ground speed.

As you go higher, the speed of sound occurs at a lower indicated airspeed.

Depending on conditions, I easily pushed it past supersonic speed at 15,000 feet. It’s absolutely easy to get supersonic at 35,000 (which is the ideal altitude as far as I know). Just level out, activate afterburner, and it’ll eventually get there.

If it’s cold enough (VERY cold), It can go supersonic a sea level. 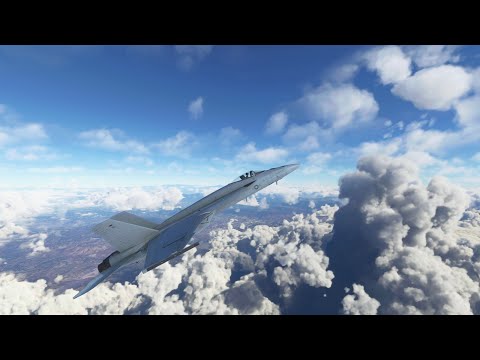 The first few seconds of the video are with live weather over Miramar yesterday, at just 15,000 feet.

Yes, my answer wasn’t a guess.

Thanks for the video. So is it correct to say that the airspeed on the HUD is IAS, not TAS?

So is it correct to say that the airspeed on the HUD is IAS, not TAS?

It is IAS… You can be sure.

I had to type this sentence before sending -

haha, yeah, I understand I had to add ‘You can be sure’ to get over the character minimum

Works fine, cool effect with sonic boom. Make sure you bind afterburner to a button or a key on the keyboard and toggle it at max thrust. You will easily go supersonic at 15,000 feet or more. Go to 3rd person view and move it around, when in front the sound is dampened, and when you move behind the sonic boom you will hear it even in camera.

Not the right topic maybe but, anybody else finds the Hornet unstable on ground when trying to perform aerodynamic braking? It tries to bury the wingtip into the ground when holding the nose up.

The radio altimeter acts weird after performing some maneuvers and doesn’t recover afterwards.

Does not slow down nearly fast enough in ground effect.

Ok I was hoping there would be a thread about this. I only had a chance to do a short flight with the Hornet last night, mostly to understand how the afterburner functioned. I noticed that it was nigh impossible to get it to go beyond .99 Mach at lower altitudes but once I tried around 10,000 it had no issues. I was under the impression that supersonic fighters were able to hit Mach 1 at sea level but that’s not the case here, is that false?

They can but it seems the Asobo version is a bit underpowered.

Seems alright to me, I could get transsonic at sea level at ISA without afterburner. The Hornet does not supercruise. Without AB it just doesn’t go supersonic (in level flight). And yeah, its more difficult to fly supersonic at low altitude, the local speed of sound reduces with increasing altitude.