First flight in England, and they already lost the bags! (Hint: They're right next to the airplane...) 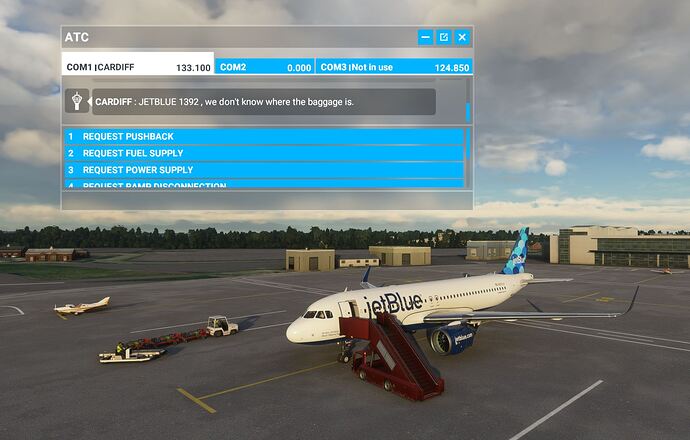 And sometimes they don’t have the catering too​:rofl:

Not trying to be cheeky here, but if you do a second request they will send the baggage. The first request renders the task item if it not present.

@PIC4506, yeah I know. In fact, I don’t even use the FS default ATC, I use pilot2ATC instead, but it doesn’t have any way to deal with baggage so I just “cheat” a little.

In fact, the first request to the default ATC made them respond as shown, but it also made the baggage cart appear out of thin air, and a subsequent request would have worked. And did, I just took the picture first. It’s also interesting that they don’t have any “remove” the baggage option, it’s always just “send”.

The good news is that FWB is working on getting their mod to do such functions, but I don’t think that functionality is quite ready for prime time just yet. I am still just learning how to fly that mod, and I already love it! I think MS/Asobo should give FBW the same treatment they gave to WT. And @ScorpionFilm422 for his outstanding work on the GNS530 & 430, and an upcoming version of the GTN(?)… Not sure if I got that name right, it’s apparently a GA class GPS that either replaces or enhances a G1000, but at least this time he’s going to be charging for the “pro” version, which I think he should have been doing for quite some time already.

Then again, I thought the same thing about WT and FBW, and maybe that’s why I think all 3 of them deserve to be folded into the MS/Asobo clan. Pay them for their existing IP, and bring them on as employees to work on their stuff full time, rather than as a side gig that they do when they can. Of course, there are downsides to being an employee, too, as in you do what they tell you, when they tell you, and HOW they tell you, instead of what, when, and how you feel like it. But there is the matter of getting paid for what was once a hobby, which in general I think is a good thing. They say do something you love, and if it’s something you love enough to do for free, then it’s certainly even better to get to do it and get paid at the same time.

Or, perhaps I’m overanalyzing again. I do that.

Excellent! I love the FBW mod as well. Each day I download the latest version to see what magic they have added. The WT Cj4 is amazing and a joy to fly.
I hope the enthusiasm for this sim continues. It will get better and better.