Hi all
I’m giving you a little feedback, I just had a really nice flight with the dc6 from Nice to Ajaccio (LFMN to LFKJ). It’s my first flight with it, after some trial flights. It’s really great to have a plane to learn. I did visual flight, I did not follow any vor or other, for the moment I learn to handle it and to manage the engine power, the carburettor heating, etc…
My flight was pleasant as much by the environment. I find that since the last update, there is much more real traffic displayed in MFS, yesterday I had a lot of aircraft around me in Paris, while before, there were only 2 or 3 who were fighting in duel. I passed in a small zone of turbulence ready of a storm, of the translucent ice it is formed on the windows, then left while leaving the cold and wet zone, , I was tossed from left to right and from bottom to top, I really liked it, I had lost the habit of having to hold the stick and to try to keep the plane straight, especially with turbulences. Anyway, it’s cool.
I’m attaching the video of my flight, a little bit cut, because I flew 55 mn

And flaps are not made for dogs … on landing. Nice video, thank you.

Thank you, but you saw wrong, I was full open flap

On the other hand, if it’s the engine flaps, indeed I didn’t open them, but I don’t know in which position they should be for the landing, open like for the take off ? 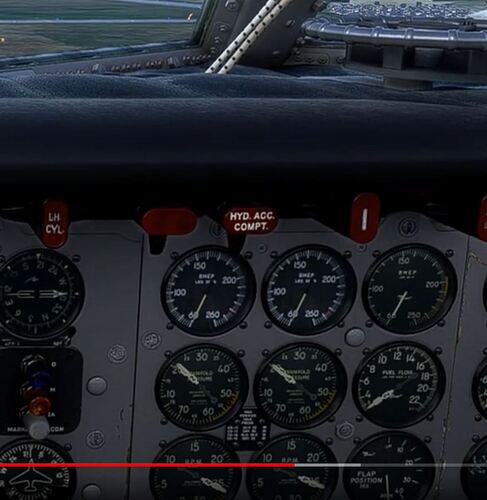 I learn without tuto or reading for the moment, I just succeeded in starting the 4 engines from the cold and dark manually, without the ia, but I must have forgotten something, I tried to take off, everything was fine in terms of pressure and engine temperature, and suddenly everything went wrong, and I lost all the engines at 1000 feet and crashed

hahah yes, the plane is ahandfull, doing something wrong…boink, end of flight.

Well, I’m happy with myself

I just started from cold and dark, started the plane without help from the ai, without having read any tuto

, took off, climbed to 6000 feet, made a circuit, and landed with success keeping all engines in the green

just for french people having difficulties with english to follow the tuto, waiting for a real aviation pro, who will face us a complete tuto about the DC-6

or maybe never…
DC-6 for french