About half way through a long haul flight from the Middle East to Asia, I had a complete loss of control while cruising at FL400. I was cruising at FL390 and it was a slightly bumpy ride, so I went to FL400. I was cruising there for a while (still bumpy) and the A320NX started violently rolling. Autopilot disengaged and I took the stick, but there was zero control. The rolling and pitching was so rapid it looked more like an acrobatic plane, not a jetliner. After maybe 30 seconds the flight terminated due to overstress.

No warnings, no other issues. Plane was completely stable cruising normally and then bang, catastrophe. I do occasionally use 2X sim rate. I had used it during the flight, but at the point of the issue I was running at 1X because of the bumpy ride. I specifically didn’t want to be running at a higher sim rate because I was worried about the flight going unstable.

Has anyone experienced the same? This was the FBW 0.8.0 dev version. Here is a screenshot of what Little Nav Map captured of the rather rapid descent. 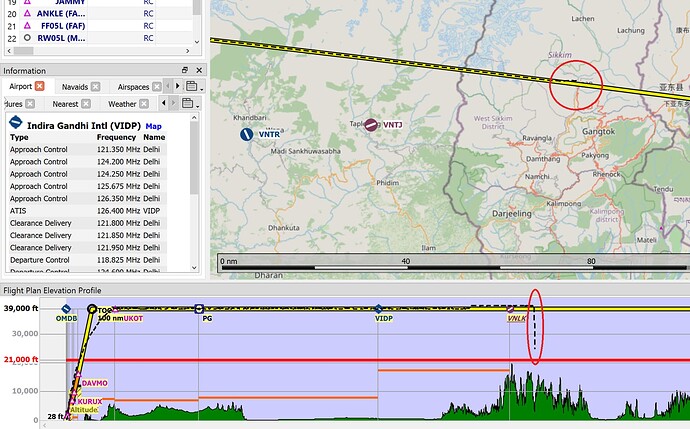 Wing/engine icing? I have not had this happen.

I know there are violent turbulences sometimes after SU6 and I had a disengaged AP, 3 times, during a flight over the Himalaya on the L888.
But I were totally able to fly the Airbus manually until I stabilized the aircraft that much, that I were able to engage the AP again.

I had the problem with non reacting inputs from the controller only one time. The reason was, I popped out the PFD and Map from the Garmins of the TBM, moved them to another Monitor …. and then…the main Problem…. I did something on that second Monitor got in Trouble with my Plane and forgot to „activate“ the sim on the main monitor. The result was, no input was accepted by the sim and I crashed.

Dunno if the 320 is certified for FL 400 but i got some insane windspeeds of 95 knots at high altitudes lately, must be a bug cuz no hurricane anywhere near me.

Tail winds were very high for most of the flight. 90-100kts. But I think the upper jet streams can easily exceed this speed, and we take advantage of it when travelling west to east (Northern Hemisphere).

There were no clouds, no precipitation, so I think icing is unlikely.

I’m thinking it’s improperly modeled winds aloft or turbulence in live weather. I loaded back into the same area, roughly the same time, live weather, and the plane quickly went out of control before I could even get AP setup. This time I was at FL380, so it has nothing to do with comments about rated altitudes.

I wish there was a virtual EASA / FAA / NTSB team, this looks like an interesting virtual fatal mishap mystery. I don’t use LNM, but it’s awesome it records “black box” vertical profile data for your incident to review.

If you were flying a 737, I wouldn’t be as interested - it would just be another typical loss of control fatal mishap. Although simulated failures aren’t typically realized within MSFS, the fact this happened in the A32nx interests me. I hope the community can help with your “investigation”. I wish I could contribute, but I haven’t had any issues with the A32nx.

I don’t want this happening to me after 2 hours of flying. I would definitely like to know how to avoid it.

You can send me the FDR file of that flight if you want. See here for location of files:
https://docs.flybywiresim.com/fbw-a32nx/feature-guides/autopilot-fbw/#reporting-issues

Keep in mind that file names are derived from UTC time.

For large files you can use a file transfer service like https://www.swisstransfer.com to provide it to me.

Feedback from developer was the latest version of the FBW A320 should have this issue addressed, so I’m going to update and mark this issue as solved.