Well, Buffalo NY had a historic 77 inches in 24 hours yesterday. Even the snow plows were getting stuck in the snow. I decided to fly around Buffalo and survey what it looked like in the sim, but I wasn’t expecting it to be quite realistic. But as I flew over, it was spot on. The roads were all still covered in snow! Good job!

I flew over Ottawa after our first snowfall of the year and, yup, FS had the city covered in snow… impressed.

Yep! Did the same last night. ATC wouldn’t even let me take off! But, since fear of an FAA lashing doesn’t exist in the Sim, I did it anyway! 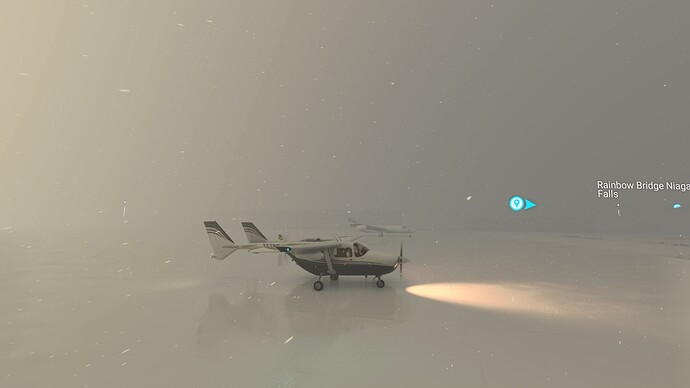 I guess not everyone knows about the bug, so they don’t get the joke. SU10 was released in the summer, so no one noticed that snow removal from roads and runways got broken with SU10. But in Buffalo, the snowplows so can’t get snow off the real roads, so the simulator is 100% accurate for Buffalo!

I did the same thing on Saturday. I flew in at 9000 feet from Erie, PA Extremely realistic weather and clouds. Nice job with the live weather…

I flew in the sim from Buffalo to Niagara Falls with the Beaver and arrived with a lot of ice over my windscreen. Impressive. Oh! I forgot to activate the pitot heating and my speedometer got stuck!

Flying in Winter its a new challenge