Flying in the US State of Alaska?

Hi folks! I typically fly in the State of Hawai’i in MSFS. I’ve got a set of addons for there, but now I want to add the State of Alaska. One of my FS buddies has flown up there in real life, and spends a lot of time in MSFS doing the same.

SO - I figured it’d be fun to help compile a list of the “must have” addons that everyone likes for the state! Whatcha got?

I’ll start off with some airports I recently picked up. (These are payware, so I won’t provide the links. Available at the usual hangouts though!):

Full disclosure: I know the studio lead for NSS. They are great folks, and I originally learned about them because of their fantastic Hawai’i sceneries. They are based in Ukraine as well, so if you could kick 'em a little support not only for their work, but also because of the horrific situation they’re living through right now…that would be most appreciated.

I think there’s a terrain mesh for Alaska out there somewhere, but I haven’t picked it up.

Show me your Alaska addons!

Ah crud. Sorry, @CasualClick. Thank you for re-directing the post!

I’ve installed all the third-party airports for Alaska and usually fly out of Ketchikan (PAWK) to the southern islands in the Cessna 208, the NX-Cub and the Cessna 172 with pontoons or skis! . The area is very detailed and the live weather adds plenty of realism. 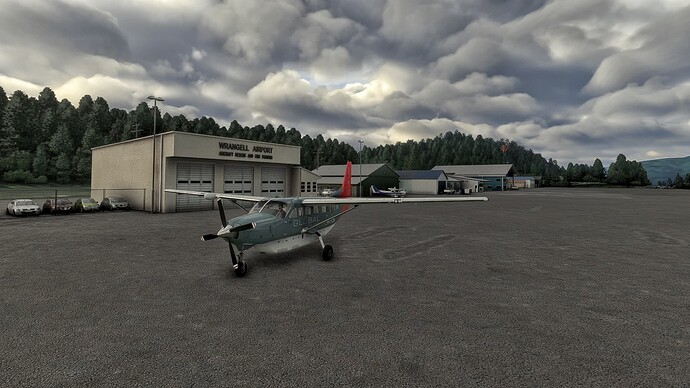 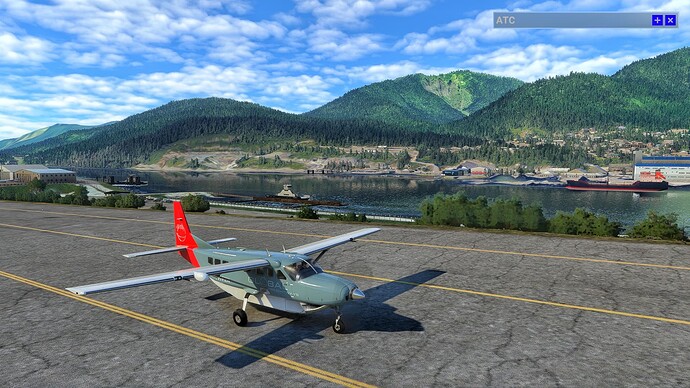 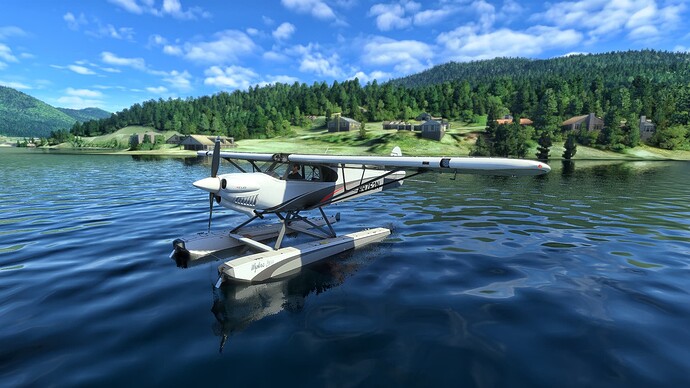 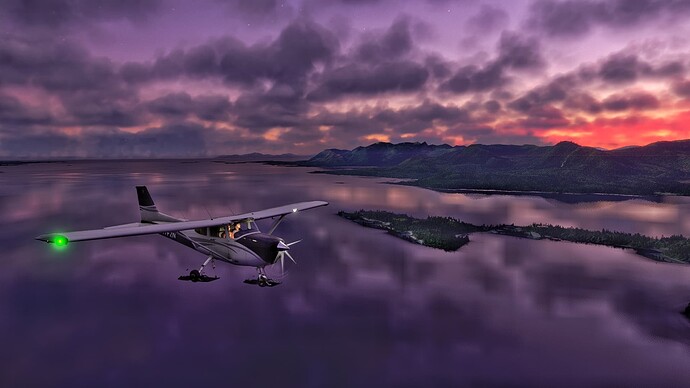 Ooh fun! Man, look at that terrain. So cool! I’m a huge C208 fan, so that definitely sounds like something I should be doing.

Don’t touch the terrain mesh - caused me problems. Found scenery was good enough without it and using Bijans seasons mod helped with things like snow-covered roads and runways.

I’m very interested in this new topic as I just started flying in Alaska for the first time in the new Kodiak release (I’m on xbox). The new Northern Sky release (PAWD) looks amazing, I hope they are submitting to the marketplace so it will be available at some point for xbox users.

I’ve only purchased 2 so far:

I didn’t know Northern Sky was based in Ukraine so I will try to support them. Perhaps their version of PAEN will be next on my list…

Flying Wild Alaska is a documentary television series that aired on Discovery Channel in 2011 and 2012. The show features the Tweto family from Unalakleet, Alaska who run the Alaska airline Era Alaska. They operate the hub operations from Unalakleet. The show also features other segments from their bases in Utqiagvik, Deadhorse, and other places. The show also features other various pilots from cities all around Alaska. Pamyua has provided background music for Flying Wild Alaska.

YES! Omg we loved that show. I followed Ariel Tweto on Instagram for many years. Was always fun to see her (and sometimes Mom & Dad!) bouncing around. 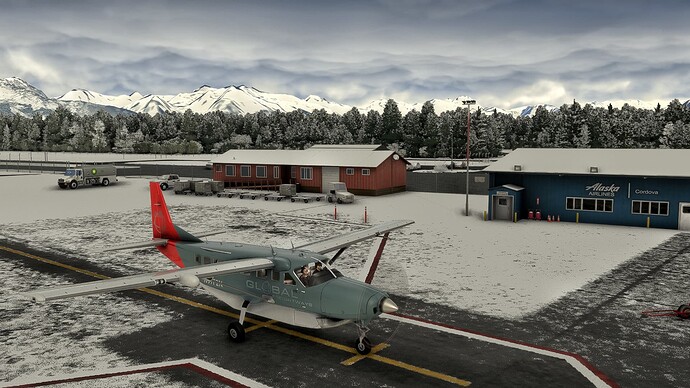 This is Cordova (Mudhole) airport and the realism is incredible. The folks at DC Scenery Design offer this on the Marketplace. I highly recommend all their airports.

Woohoo! First flight done in Alaska. I went from PAWD (Seward) (Northern Sky Studio), to PAEN (Kenai Municipal Airport), about 64nm to the northwest, across the Kenai Peninsula. I was flying the BlackBox Simulations Britten-Norman BN-2B-20 Islander. For this flight, I was decked out in the livery of “my” Virtual Airline with Air Hauler 2, “Barber Pole Air.” So named because of my unfortunate habit early on of overspeeding the C208 on descent. Then…I learned about FLC!

At least there are a few more artificial reefs around Hawai’i because of me.

Didn’t stick around PAWD to take too many screenshots - but here’s one of me climbing out, trying to figure out how high I should be to get around the mountains that are super close (around 4nm) to the airport!

Enroute, the surrounding land was really gorgeous. Super rugged and mountain-y near PAWD. I was on the US-West server, and it was neat to see other folks out there enjoying themselves too!

Somewhere around like 1/2 way down V508 from the SEWAR nav point, the mountains dropped off and it became flat ground. This shot from Volanta (great, free map / flight tracking program from ORBX) shows the route. Err… neverminded my approach to PAEN… yeah, it was an RNAV approach (RNAV (GPS) Rwy 2L), and somehow I missed my turn to head down towards one of the entry points, KASSI. I got it figured out though! 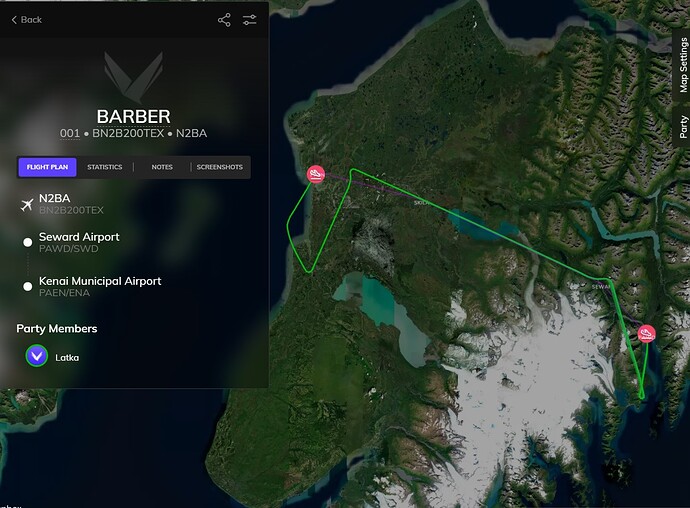 While I didn’t have computers to fly the approach for me (I usually stick to the C208B Grand Caravan EX with the G1000NXi cockpit), I still was able to hit the IAF at 2,000’. Lo and behold, there was the airport! (above and sorta between my Attitude Indicator and Altimeter)

Here we are, just before shutdown at my “I’m gonna leave it right here” parking spot at PAEN.

Great little flight. The weather was pretty good, although that little plane got chucked around a bit over the mountains in the first half of the flight. I had so much fun up there that I’m going to make a new base for Barber Pole Air somewhere in AK!

You have to check out Return to Misty Moorings - FS2020 Scenery

Yes Cordova is great! I fly the Kodiak and A320 (with Alsaka livery of course) there. I was trying to decide which other DC Scenery Design airport to get in addition to Cordova since they are currently on sale.

I just purchased Kodiak (PADQ) by Realworld scenery (also on sale). The “stock” PADQ airport is so bad (includes a massive control tower like you’d see at a large airport) I wanted something better in this area. Honestly the quality of PADQ is not at the same level of DC Scenery, but was the only option.

What are peoples’s favorite DC Scenery airports? I have enough in my “airport” budget this week to pick-up one more under $10 airport in the region and trying to decide…

I will definitely pick-up Northern Sky PAWD when available in Marketplace (my only options since I’m on xbox).

There are lots of great Alaska bush strips to download and try out from Flightsim.to - Discover Microsoft Flight Simulator Add-Ons » Flightsim.to

And +1 for Return to Misty Moorings

(and when you run out things to do in Alaska you should give Papua New Guinea a try!)

Definitley going to look into the Misty Moorings!

(and when you run out things to do in Alaska you should give Papua New Guinea a try!)

Oh man - PNG is lovely stuff. I am hooked on Ryan’s videos! He was how I found out a Kodiak was coming out for MSFS. Oh, and for those interested… Ethnos360 Aviation - P2-NTK! It just seems the proper thing to do over there.

I love my Air Hauler 2, so I’m going to branch out from mainly flying in Hawai’i to add bases in both Alaska and PNG!

Someone uptopic mentioned they had issues with the Alaska mesh from OrbX.

Just chiming in to say I fly in Alaska a lot – I have all the NSS airports (bought them from OrbX when they announced they’d forfeit commissions to support Ukraine-based NSS) and a ton of add-ons from Flightsim.to in the area, and I haven’t had any issues with the mesh.

Also, it includes a portover of the P3D Juneau airport, which isn’t up to the standards of native MSFS add-on airports, but it’s still dramatically better than the stock Juneau. I’ve flown there in real life a few times and it’s not a bad represenation.

I own Ketchikan from Northern Sky Studio and I highly recommend that, I love it. I didn’t know they’re from Ukraine, I’m going to check out their other airports.

Yep. They also have awesome Hawaii airports. I have all of those, except the couple that South Oak Co also did. Super quality overall in both AK and HI.