Flying under the Golden Gate Bridge

Surely everyone does this right?

I have found that no matter what altitude I fly under most bridges including the GG in San Fran, a weird thing happens just as I fly under at 80 ft alt.

Surely this is a bug. The SAME glitch occurs if I strike the objects intentionally.

What I suspect is that although bridges are rendered as if they are 3D objects, they exist only as height maps within the MSFS model, and so the sim has been programmed to hack around the faked world model.

Have you reported it through Zendesk?

I wonder if this is a bridge thing liked you mentioned. I noticed today during the Denmark bush trip that the Great Belt Bridge roadway appears just under the water, so it looks like the cars are driving submerged from 2000ft.

I think it’s a problem with the collision detection system which only has one object you can collide with which is the current terrain and “decor” height. The thing is though I flew right through that building in Shanghai, which had a circular hole in the building.

Shanghai World Financial Center! Ooh, that I need to try!

Is bad modeling, lot/most? bridges have this, plane thinks it’s crashing into ground

Yes it’s bad modelling. Lots of bridges did this, until recently. We even set up a special topic, to report bridges that allow flying under. Most bridges got repaired with the SU-5… but not everything… London Tower Bridge won’t allow it either.

NOTE: just tested it with ICON… it has issues indeed. When you approach, you see the shadow of the “wand” in the water…

…with damage assist off, you’ll get a black screen immediately. But with the assistant on and enough airspeed, you can fly through the “wand”, you just hear a short crack.

No going to get your PPL doing that 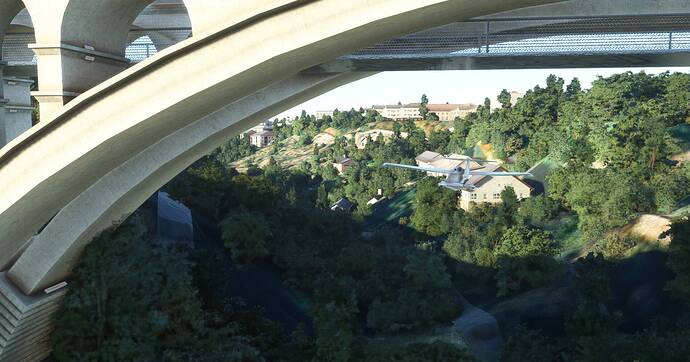 And also between the towers of Tower Bridge, London. The game is not meant to have perfect collision detection. That is a lot of processing data that would be wasted.

Well, there IS a collision, that is the problem ! Collision works, but there should no collision.

There is an invisible wand, in the bridge 3d model. It should be looked into for every handcrafted bridge.

If you find a bridge with issues, please report it to Zendesk. It can be repaired, but don’t count on it on the next update. When you put a scenery error to Zendesk, it can take months to solve.

I passed under Golden Gate with F-14 without problem, but didn’t make it thru London Bridge. Looks like it modeled like one solid object, without empty space in middle.