Ok, will do. Thanks!

Now there are conspiracy theories going on about Microsoft infrastructure.

i doubt how someone will think about hacking such big corporation.

Umm BBC, CNN etc news sites are far from a conspiracy site. It’s also a statement directly FROM Microsoft. So maybe do some educating yourself before go calling folk conspiracy theorists.

I also never said it’s definitely that just I imagine it COULD have something to do with some issues we have seen with servers. These hacks are proven and I only mentioned as was on the NEWS so thought worth dropping.

Obviously shouldn’t have brought up given people are being so rude and insulting over someone daring point out something in an article they read.

Please keep the focus on MSFS and subject rather than users of it. Thank you.

just did at KLAX which wasn’t loading so had to turn off data all in option menu and when it loaded i turned on all data. Thank so no more graphics changing

Doesn’t work for me unfortunately

Thanks but no luck

It’s actually such a strange bug. I’m just praying they fix it in the next week or so

Pray has become the mayor practice of MSFS updates.

I will also pray… Any God in special???

I’ve been unlucky, I bought my PC a week before SU5, it was perfect until then… Then I had minor issues which were fixed in the hotfix and now I’m unable to fly at all!

I’ve spend so much money on airports, aircraft and sceneries too!

And keeps getting worst.
Sceneries that previously load ok, now they won’t (MMGL) for example.
This is a must fix soon bug as I believe that the community will start having each time more problems.

It seems completely random. I fly out of EGBB mostly and that won’t work for me but others seem to have no issue loading into that airport. So frustrating 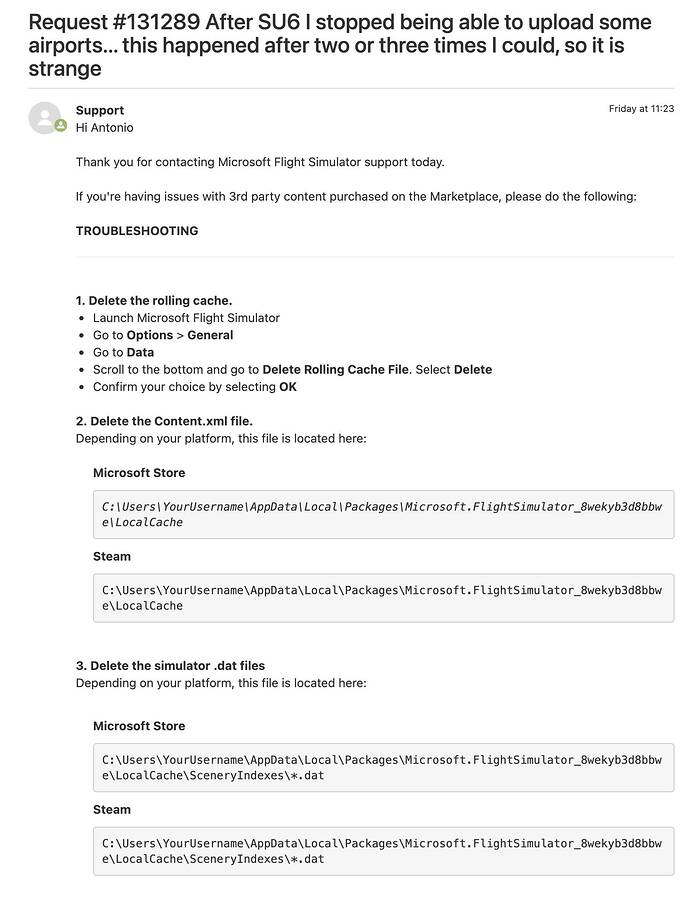 This is what Zen Desk answer… a whole new ritual to add.

After doing that, kill a black rooster, and with the feathers run around your computer, make three wishes, blow a purple candle and pray what ever your religion is.

At the end it works for me at MMGL scenery, will try with KLGA and others and let you know.

Hopefully they fixed on the next update.

You do realise there are thousands of mods produced over the years by hundreds of devs be they sizable professional companies or just a single bloke and his hobby, where exactly is it you want to draw the line? and MS or Asobo can’t legally bugfix any of it without the necessary access, licences and permissions yet alone source code (where applicable).

Let´s not get distracted

You have very good sense of humor

. Cant they acknowledge that there problem with loading all along even when we are not using any 3rd party addon It has happend in safe mode which eliminates any chance of conflits and deleted these files in cache absolutely does nothing and issue come back again and again

safe mode which eliminates any chance of conflits

Unfortunately it doesn’t eliminate anything, there are still probably remnants of deleted mods in your sim if you didn’t use the apps uninstaller.

Also worth remembering that marketplace add-ons are also add-ons - if from third parties, there is no guarantee they are not causing a conflict just like add-ons in the community folder. So suggest try uninstalling those as well if you have any. Orbx London Landmarks from the marketplace did this to me for a few weeks until they updated it. The version from Orbx direct didn’t…