Just tested it and it looks pretty good to me. My FPS are way down (20fps on a 3600XT and RTX 2080 with 16GB RAM), but that was expected. It’s very GPU heavy so I have room to tweak since usually I’m CPU-bound.

What bothers me the most is the winter look. MSFS rendering aside but look at this… For an airport that is quite regularly covered in snow, this look ist simply unacceptable for me (weather preset “Snow”).
Will have to contact support to see what they say. I’m not surprised there are no screenshots with snow on their pages, just a statement that it uses MSFS snow system. 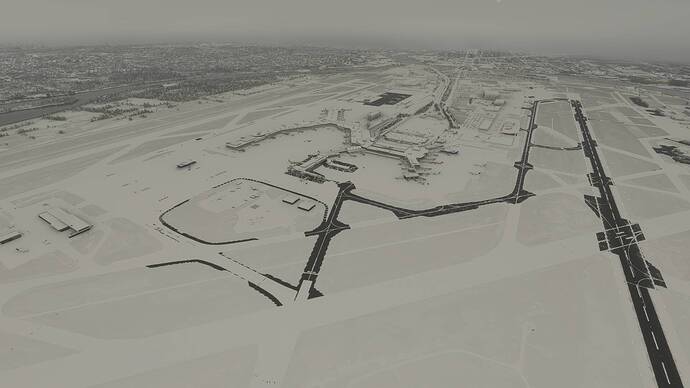 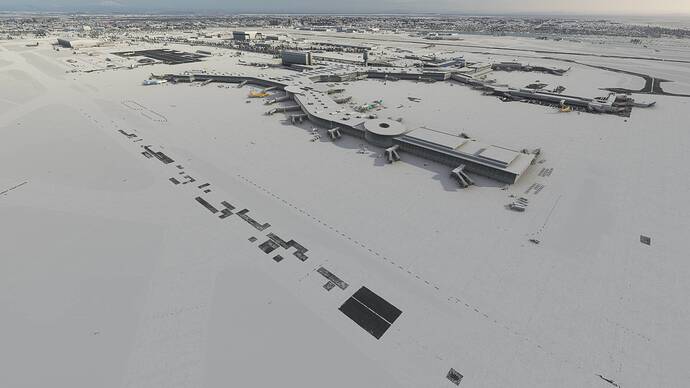 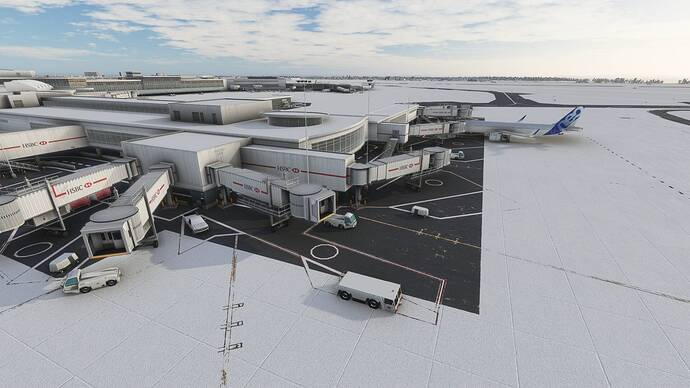 Everywhere where they put darker tarmac, it is visible, but not in a good way…

Edit: Just received a response from FSimStudios (their support is really quick).
So basically they say that MSFS applies less snow on darker surfaces and thus they have little to no influence on how it looks. Asobo seems to be aware of it and they pointed me to this thread:

The snow effect is fantastic in the sim! However, there is a lack for its customization by 3rd party developers. The first and foremost issue is that the snow cover intensity’s visual representation depends on overall brightness of the underlying terrain. If the textures below the snow are dark enough (such as asphalt runways), the effect is brilliant. However, if the surface is light in color, then the whole surface gets covered by snow layer including the markings which looks very unrealistic …

Well we have to accept that state. While I knew that MSFS default snow handling is a bit weird, I assumed that addon scenery handled that in a nicer way (it’s my first paid airport addon).

This is interesting: I took the following screenshot the day I got the scenery: 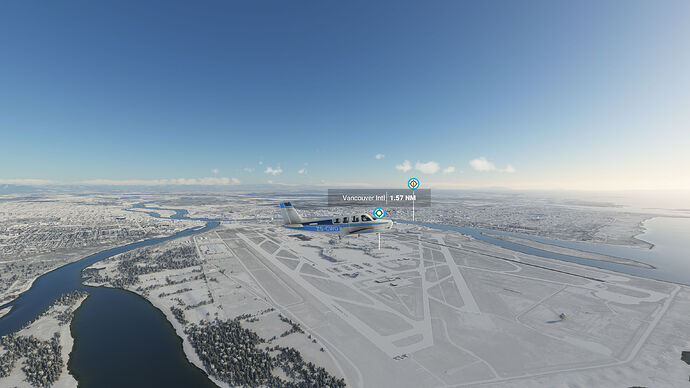 Well, just a few. Does it still look like this even if you’re closer? Maybe it’s just a LOD thing?
Not sure if there are different levels of snow coverage, I think there is just one.

I haven’t tried with snow. I am so bothered by the fact that MSFS just leaves the snow all over runways that would have excellent, 24/7 snow removal on the runways and main taxi ways I avoid snow when I’ll be making use of airports. Any issues specific to this scenery pale compared to that huge failing of the MSFS snow system.

But I do often find add ons don’t have great snow or don’t have good snow at all LODs. The Drzewieki Design Chicago downtown buildings turn all white, sides as well as tops unless you are right up on the building and then the sides look ok. And Chicago is covered in snow most of the long winters there. CYVR/Vancouver area gets snow maybe twice a year and it sticks for only a day or two here and there. A week of snow on the ground at worst. Vancouver is not your typical Canadian city regarding snow cover.

And the snow cover is just so unrealistic in general, especially in a circumstance like Vancouver. We rarely get snow that sticks here in the metro area, but the mountains not far away are covered in snow all winter long. I’d love to take off from CYVR while snowless, as it almost always is, and then as I flew north in the mountains and they’d be snow covered, but there’s no way to get that in MSFS. They don’t use any real word snow cover maps, there’s no algorithm looking at real word temps/precipitation to try to place snow accurately, there’s no altitude based snow settings. Rather than one “depth” setting, they really should have a minimum snow altitude and the depth there, and max snow altitude and depth there. So I could set snow to start at 500 feet with just an inch and, say, at 3000ft and above there’d be maximum snow, 3 feet, etc.

The whole snow situation is so unrealistic and live weather so disappointing/frustrating I gave up on using either. It’s near infuriating Asobo/Microsoft make live weather a selling point when it’s basically useless and badly broken. Never once have I hit live weather at my local location and looked out the window and saw any decent correlation. It’s really a sad and pathetic situation.

They don’t use any real word snow cover maps, there’s no algorithm looking at real word temps/precipitation to try to place snow accurately, there’s no altitude based snow settings.

Oh but sure they do and today I’ve seen snow covered mountains above North Vancouver.
They use MeteoBlue snow coverage map which you can find here:

From my perception that actually works fine. It’s the airports that bother me, so I avoid flying in winterly conditions.

I’m glad you find it works, I haven’t found that to be the case. So I gave up on snow unless I’m flying some place I expect complete and total cover and then I just turn it on and way up. It doesn’t work well for a lot of people.

Do a search and you will find countless complaint about snow coverage not being accurate or even plausible.

Hello All, Just d/l MSFS 2020 from Steam. I live in Northern Ohio and we have a lot of snow outside however when I’m using live weather all the trees are green and there is no snow on the ground. Is there some setting I’m missing? Thanks. Terry

So, I deleted my rolling cache file and remade it and CYVR 1.1 loads perfectly now. And funny thing, my fps flying right over it was 30+??!! So not seeing much if any slow down over the airport compared to most average urban areas. And flying over Vancouver downtown I don’t see the slow down I did, but I swear some photogrammetry buildings look lower resolution than I remember? So I tried Manhattan which generally grinds my PC to 12-15fps unless I’m 1500ft or so. And I was getting 26-32fps flying over Manhattan at 700-900ft?? And I couldn’t see LOD popping all over like I used to? I could make it drop into the mid teens in NYC, but only at rooftop level. Sim Update 3 perhaps? And I wasn’t seeing this performance because I had 60GB of older data in my cache??? I’m super stoked to get higher, smoother fps! But I am a little worried Vancouver downtown lost some detail? Anyone else fly close over Vancouver before and since Sim Update 3 and notice a resolution change?

Really does make me think a hand crafted downtown Vancouver would be a fantastic product!

I just took a look at night and I think it looks spectacular! Love it! The cooler exterior lighting I don’t think is an accident, that’s around the new, just completed Terminal D expansion. The rest of the original airport has the more yellow exterior lighting around it’s terminals. Accurate or not, seems intentional. Seeing through the glass into the detailed terminals really looks amazing at night. I’ve never seen airport vehicles with flashing colored warning lights, and red glows from tail lights? Maybe I just haven’t checked out enough airports at night? Or is that part of this add on? 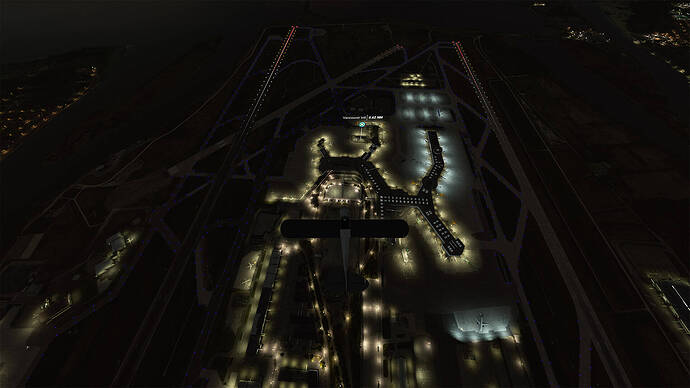 It does look like the terminal D has the new LED lighting, the rest have the old, since replaced HID lighting. And sure, the windows could be lit warmer in comparison to the exterior LED and sure, a proper lit up Air Canada sign on their prominent hanger would be a nice touch! Hopefully that’ll come in an update?

Also, of note while talking YVR night lighting? From the article above.

“This marks the first time an airport in North America is using an adaptive dimming system based upon gate usage.”

Adaptive, so getting the brightness exactly correct may be complex!

Thanks for the reference pic, a bit unusual the way they’ve placed their lights in sim.

a bit unusual the way they’ve placed their lights in sim.

How so? I’m not very familiar with airport night lighting at other airports, stock or add on? Looking at the FSDT site Their CYVR night lighting doesn’t look much different other than have the same color lights around all the terminals. And the color looks somewhere between the warm yellow green HID and the cooler, bluer LED lights FSS’s version has?

Or by placing in the sim do mean how it’s done in the add on? I went poking around and sure didn’t see anything in the textures or anything I know how to read and edit. So I assume the lights and their colors are defined in the massive .bgl? I’ll have to learn to poke around with those files at some point. But not tonight! Looks non trivial to say the least!

Hi there, to be clear I have no major complaint.

When I said weird placement, I meant more of the decision to switch the color temp at an almost symmetrical intersection since the photos show the temp to be pretty uniform.

I think it may be they were trying to capture the glow of the inside terminal lights which are warmer, while the lights outside are more of your typical bright white LED.

Hard to say exactly why there’s that shift for sure, but as I said above and as evidenced by the HID vs LED before/after photos, I have to conclude the warmer lights represent the old HID lighting, the cooler ones the new LED lights. And given the cool lights are around the new terminal D expansion, seems related to that. The level of detail and accuracy in this airport overall is high, so I wouldn’t guess they did that randomly. Thing is, all terminals had LED by 2017, the new terminal was completed recently, it’s still unused because of the covid air traffic slowdown. But it’s possible the major structure of the new terminal was already up in 2017. It’s, in theory possible it got LED first while it was being built and they used reference from that time when doing the lighting? I wouldn’t guess it’d take 4 years to build that terminal, but who knows. I guess that’s public information.

Eh, Terminal D construction began in 2018, the year after all the exterior terminal lighting converted to LED.

So, who knows! Random artistic choice, just a mistake, I dunno.

I’d have loved if they would have provided some charts with the scenery.
Since I have no Navigraph subscription, does anyone know a free (legal) source for CYVR charts, maybe ones that are not too old…?

I don’t know about new? But perhaps these are helpful?

They are both very outdated (2004/2009). I’d at least like to have a version of the charts that matches the state of the scenery which is why it would have been handy if they’d include charts in the addon.

But it doesn’t seem like it’s common to do that, it is actually my first payware scenery addon and just like for aircraft addons, I hoped to get some documentation with it.