The 165kts is not that far off at 10000ft
Don’t trust the mixture setting, its all messed up, just try for peak fuel flow

The bonanza has two tanks, one in each wing. there is a manual fuel tank selector down by where your left leg would be, its a big red circular handle. Make sure to switch it every 30 min or so to keep the plane’s fuel in balance.

I have never flown one to almost empty in the sim so I don’t know about the gauge warnings, in the real plane it comes on with about 30 minutes left in that tank when it reaches yellow (7 gallons/tank) if I remember

Make sure to switch it every 30 min or so to keep the plane’s fuel in balance.

Ahh, I actually thought that the G36 would have both tanks feeding in parallell… My fault…
The fuel gauge in the G1000 shows the amount of both tanks together, right?

It’s strange though that there was no warning at all, so probably this is a bug… I’ll try to reproduce and will file a bug report.

no, it has separate left and right fuel gauges, at the bottom left of the right screen it will have a white upside down triangle with an L for left tank and another white triangle below it with an R for right tank.

Try to keep them close to even (about 1 tick on the gauge). If one gets out of balance, the plane will want to slowly roll to the heavier side.

Thanks, that was the issue.
But I just tested it - if the quantity of L tank is 5% or less it simply turns off. No warning, nothing.
Also there is no warning if you reduce the R tank to the same amount - there seems to simply be no such warning at all

That’s pretty stunning. But at least explains my issue.

So I tested it and got the following:
The G36 engine shuts off once there is <= 3 gallons of fuel in the active tank (roughly 8% of the capacity!).
At this time, the corresponding gauge is just in the yellow (left tank was active): 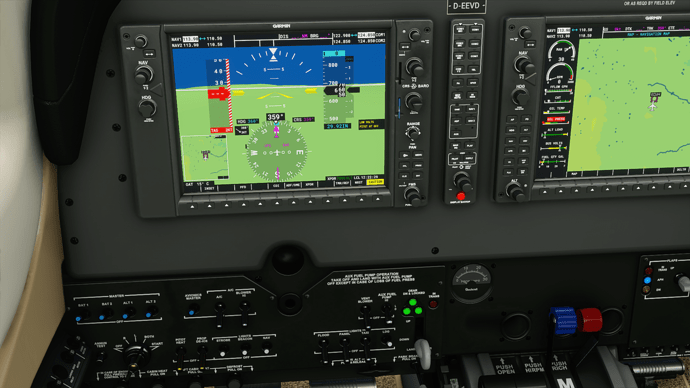 In the G1000 on the C172 there is such a warning for each tank separately shown in the PFD (both tanks set to 5% quantity each): 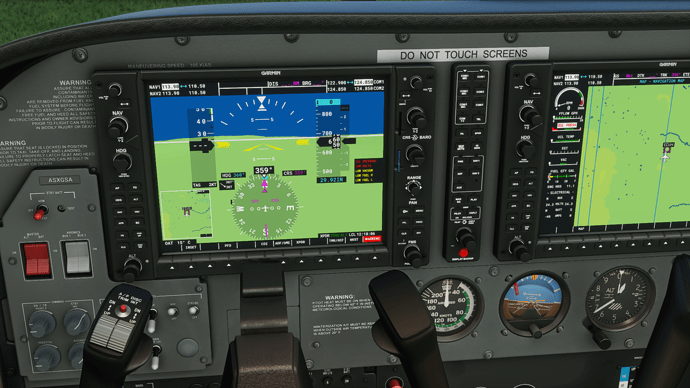 So there clearly is something missing on the G36 to warn you which is even more critical since one has to switch manually (opposed to the C172, iirc).

Oh and also note how the OIL PRESS is flashing on the MFD but the G36 is missing that warning on the PFD as well… I’m not sure if those warning were disabled on purpose since basically the G1000 interface is the same for all of these aircraft.

that is a bug worthy of reporting to zendesk.

Done… I first checked the config files and JS files, but none of them shows any significant difference between the C172 and G36.
I actually can’t find anywhere the warning “PITOT HT OFF”. The NavSystems.js contains the different warnings, but seemingly the G36 is not using that default set of warnings…

Maybe @FrettFS has seen something G36-secific there which overrides the default set in
Official\OneStore\asobo-vcockpits-instruments-navsystems\html_ui\Pages\VCockpit\Instruments\NavSystems\Shared\NavSystem.js line 2342 and following.

No, it would be messed up programming in the g36 version of the g1000 (they are all slightly different), the only things changed with the performance fix theoretically is what is in the community folder, and that is only 3 flight model .cfg files, not the xml and .js required to disrupt the g1000.

Actually they all reference the asobo-vcockpits-instruments-navsystems AS1000 implementation, there is no javascript in the G36 folder at all.
So I assume it is somewhere in the config files of the G36, but I can’t even find the PITOT HT OFF entry which seems to be in none of the files of the whole Official folders.

EDIT: Aaaah, I got it, it’s in the panel.xml, the fuel warnings are intentionally commented out on the G36

Seems to be intentional, but it’s weird…
@FrettFS: Maybe you could add a modified panel.xml in your mod to enable the fuel annunciations?
The commented out warning is with a treshold of 4 gallons, probably a higher value like 7 gallons would be better to have some room before the engine goes out at 3 gallons.

The official Beechcraft website has a picture where a red annunciation can be seen, showing “FUEL QTY LO”, but FS seemingly has to differ between L and R tank:

The Bonanza® G36 is the aspiration of any pilot who desires unmatched craftsmanship. This piston-engine powerhouse is designed and built to be certified in the rugged utility category. With first-class technology and comfort and world-class quality,...

This is what works for me, it creates a red warning at 5 gallons (just where the yellow range on the gauge starts) with an aural warning until it’s clicked away:

I will include this in the new version. Also saw it commented out but didn’t pay attention to it as I never really drained the fuel tanks before. Thanks all!

I will post a beta version of the new version later today with the flap/gear drag improvements, 2000rpm efficiency fix and the fuel level warning.

Thanks! Looking forward to test it

You can also set the type to Caution, or even add two levels (caution at 5 gallons, warning at 4 gallons), not sure what is more realistic.
At this time there seems to be no way to replace the caution with a warning upon further depletion, only additionally (so both caution and warning will be shown in parallell), which is unfortunate.

EDIT: I sent you a suggestion via DM. Caution between 5 and 3.5 gallons, warning below 3.5 gallons. It gives a tiny amount of time before the engine goes out after the warning.
Also I suggest to comment out the Pitot Heat caution since all checklists I have found say “as required”, a permanent caution doesn’t make sense to me.

Is there any way we can get this pinned to the top in or a new thread for piston plane improvmeents?

Also I suggest to comment out the Pitot Heat caution since all checklists I have found say “as required”, a permanent caution doesn’t make sense to me.

Definitely agree the Pitot Heat warning should be removed. It doesn’t exist on the G36. Is slightly annoying to have to turn it on to clear an annunciations that isn’t present on the real airplane. Would also be nice if the white “BUSES TIED” annunciator could be incorporated, as this is part of the pre takeoff runup check. It comes on if RPM drops below 1700, and then won’t go out until above 2000 RPM. Here is a list of actual warnings and caution indicators: 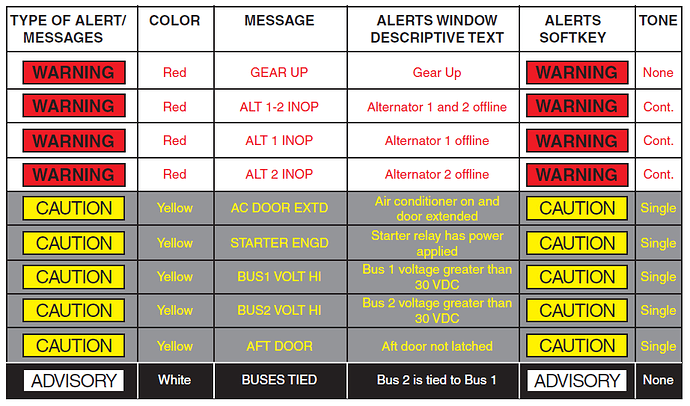 I’d vote for some “mods” category where only creators of mods shall open a threas for their mod and keep out new threads that are just for discussion. Making all mods sticky would cause too many sticky threads, I think.

Another option is to have different categories for each aircraft type where such mods specific to that type could be sticky, but I don’t think that will happen.

A sticky thread with a moderated overview of the threads might be the best way to go.

I just played with this and it works perfectly.

For the Prop RPM, its a constant speed prop with a max rpm of 2700.
On climb out, your gauge is in the red, I am not sure that this is correct? Would an adjustment to the RED region be necessary? E.G. Setting it to 2725 like below? Always bothered me that on take off role @ low alt on a cool day the Prop RPM is in the red.

I am running this edit below and it works well. I honestly haven’t checked the manuals to know if this is realistic or not. Can a real G36 operator comment?

Just reading the POH regarding the RPM warning and it states the following:

Not sure if that helps?

I have a basic BUSES TIED advisory in the latest version of the mod (not yet released). However, I don’t know how I can make it such that it turns off after reaching 2000 rpm again. There is not a lot of flexibility in the ‘programming’ that you can do in the panel.xml. Anyone any ideas?

Interestingly there is a simvar in the SDK documentation called: BUS CONNECTION ON
Seems to be WIP though…

Also including the fuel quantity cautions and warnings now 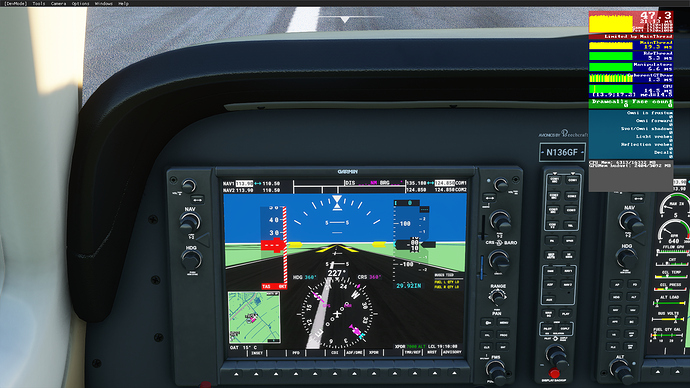