Ok, just replicated. KRBO-KGLS. Rotate the knob to the WPT section. Scroll through until you get to the page showing blubl4 arrival. After that, the whole unit is frozen, Have replicated 3x now. By frozen I mean the pages won’t change, freqs will switch… nothing. This is what it looks like now. When turning off the master, it also does not turn off.

I’m having an problem with the labels and overlays on the GNS530 frozing when I switch aproaches.
Zoom level, navaids, distance, ETE, all froze and only change if I refresh the unit screen by opening procedures or other page and going back. I can zoom in and out but zoom label stil froze on the actual zoom number.

I’m having this issues in any flight.
Tested it 3x with the following flight: gps direct flight to KNGU, 60nm out, no aproach pre loaded.
Select ILS 10 and load it. No problems. Aproaching the airport, sintonize tower and ask permission to land. Receive the info to use airstrip 28. Select aproach RNAV 28, load and then activate it. Screen froze.

Yes, a small bug. I will fix that.
It’s not really a freeze. The GPS stays in selection mode. You just have to push the right knob to unblock it.

Also, as he’s previously noted, turning the Avionics switch, or even the Electrical Master switch, does not actually reset the avionics. The only way to do that is to restart the flight.

Also, as he’s previously noted, turning the Avionics switch, or even the Electrical Master switch, does not actually reset the avionics. The only way to do that is to restart the flight

OR … If you have Developer Mode ON, (or turn it on) re-loading the plane will also restart all gauges in the plane, but (I seem to remember) the FP you have loaded, remains there !!

This may preferable in many circumstance, than re-starting the flight

I’ve heard some people say reloading a plane in developer mode does not necessarily completely reset an aircraft. I might be wrong, though.

Its a little hit-and-miss , but if you select a different plane, then once it loads, go back and select the original plane, it seems to work every time…

Hi
It’s an issue with the sim’s arrival database for KGLS.

No problem with Navigraph database.

It took time for me to find what happened here.
First, there is incorrect information in the standard MSFS database (not in navigraph) so the code is not able to find some waypoint data.
When this situation occurs, there is a bug in the MSFS code that tries to read an undefined variable and produces a kind of infinite loop. Since this is not part of the kernel code, I was able to correct this bug so invalid data in the database should not anymore (at least in this case) produces a freeze.
The only consequence, after the fix, will be some un-displayed waypoints in the procedure maps (only when there is invalid data in the database).

This fix will be available in the next release.

Until that, I suggest you use Navigraph if you can instead of the standard database.

This bug has been tested with KGLS arrivals but probably some other airports have invalid procedure data that should also produce this kind of freeze.

Thanks alot for troubleshooting. Just wanting to give feedback whenever something comes up with this great mod!! Appreciate it.

Hi
It’s an issue with the sim’s arrival database for KGLS.

Maybe put a MSG in the message area, at least to warn that it has detected a bad Waypoint/database, and if possible enough information, to help the user reporting back to Asobo’s ZenDesk, otherwise Asobo will never know to fix it.

Yes, I appreciate that a message like those may not be “Real World”, but then, hopefully Garamin Database errors are not “real World” either !! 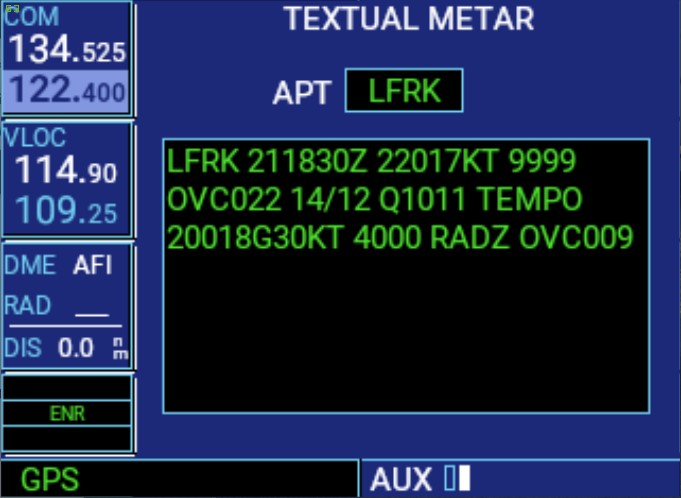 Shame Garmin did not include a “ENT to Translate”

Wooooooww
Awesome see this. thanks a lot

That’s so f’n awesome!!!
According to the Aerosoft guys, you can’t get weather from the sim? Maybe they mean something different, like the local wind around the airplane?

You can’t just read that Geoff??

The Weather radar is also very cool – thank you to the last owner of my c172 who had more money than sense, and installed one !!!

What did that do to your useful load???

Lats night I broke down and got the REX 2020 Weather Force, so will be interesting to see how that works with the GNS530’s Metar addition

This close to an update widely rumored to have at least some form of weather improvements? Well, regardless, once you’ve had some time with her, I’d be interested in your opinion/feedback.

I looked at one of the freeware weather mods and it’s “about” page read more like an ad on why the default weather engine was better, so I took a pass.

I’ve been pretty happy with the default weather in FS2020 anyway, except the lack of accumulating snow which I didn’t even notice until that big nor’easter we had a few days ago, and it sounds like that may already be fixed anyway.

But since you went ahead and pulled the plug on Rex, at the risk of being repetitive, I am curious what your thoughts are after you’ve had it for a few days. If it’s noticeably better than the default (or, the default as it may exist in 24 hours time) than I might be interested myself.

This close to an update

(Rhetorical question: Anyone else already checking the Store for the update

yeah, that would be me

, a couple of times now
Hey, they’re in Europe, maybe it’ll get released at the end of their day? (then again, it’s MS releasing it, right?))

I use Peeyem package manager, you keep all your MODs in the folder of your choosing and the manager just creates/deletes simlinks of the MODs in the Community folder…very clean.

What did that do to your useful load???

Not had too much chance to evaluate it …
Noticable improvements are

Isn’t that the same thing that “MSFS Addon’s Linker” does?