After SUX the sim seems to lose 30+fps every so often, roughly two minutes. I think it’s when its trying to load the scenery in. I’ve had every setting on the lowest apart from TAA and at 1080p. I’ve tried to do a process of elimination but can’t find the culprit.

I do have an old (considered old now) PC. 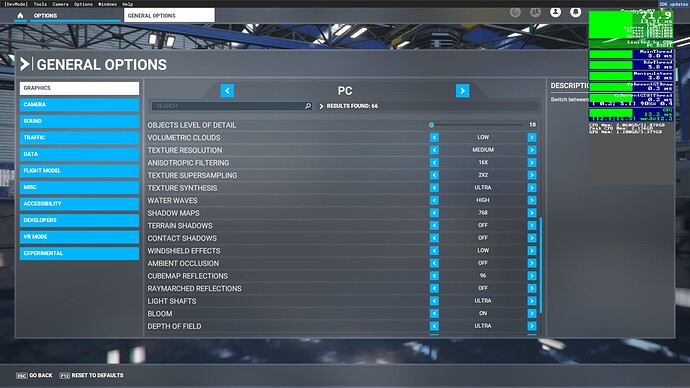 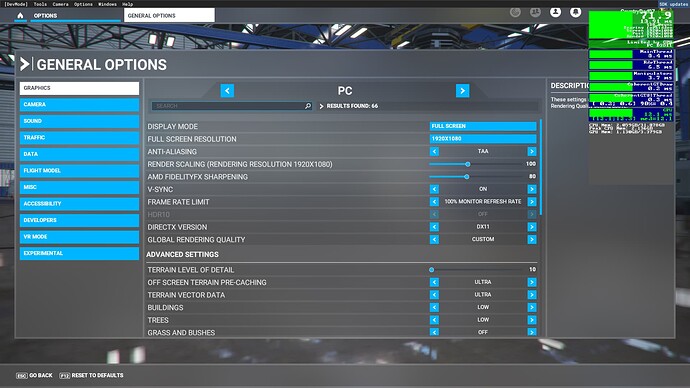 TrackIR5+FSRealistic+FSATCChatter are running in the background. Still happens when their off.

If anyone’s got an insight or needs more info. Please ask. Cheers.

After SUX the sim seems to lose 30+fps every so often, roughly two minutes.

You’re sitting at 1/3 VRAM usage sitting in the hangar, so most likely your performance issues are related to maxing out your VRAM capacity. Once maxed out, it switches over to slower system RAM and latency significantly increases and performance will tank.

Your only logical option is to reduce visual settings further to reduce VRAM consumption. You can try lowering texture resolution, as this has the biggest impact on VRAM usage.

However, with only 3 GB of available VRAM, you’re severely limited on what settings can improve performance. I think it’s time you consider a new GPU.

Thanks for the reply!

I could’nt agree more. I knew 3gb VRAM is pushing it lol I’ll tweak the settings further and see what I come up with.

Strangely I managed to have the game running smoothish before SUX. But I know tech changes a lot. I was looking at a Nvidia 3060. I’ll be on the hunt soon.

Even a 3060 would be an excellent upgrade compared to what you have. Best of luck in your shopping.

After a full reinstall and another days worth of tweaking I managed to get it working. No more GPU bottleknecking. You’re right about the VRAM for sure. So I have ordered the 3060 12GB VRAM Eagle. A decent one to keep me going for a while.

Felt I’d owe you a reply on my situation.