I had initial issues with major stutters for this bird, but changing to DX11 and deleting my rolling cache cleared it up. I had my best performing flight ever in NYC with this after doing that.

Anybody else see that, or am I loosing my mind?

It’s not the A310, it’s not beaver, it’s not the DC-3…the Cabri is low-key becoming my favorite from the 40th anniversary party town.

With that said, i’ll probably say the exact same thing in the DC-3 thread and A310 thread as well about those aircraft lol.

But yeah, in summary, basically i love this one.

As for the Bell, not yet, i feel it’s got issues. Will wait for further updates.

The G2’s rotor should spin clockwise when looking from above. Due to Newton’s law, the fuselage of the helicopter wants to spin in the opposite direction. You have to apply anti-torque pedals (not called rudder) to stop the fuselage from rotating. The more collectively you pull the more torque is generated therefore the anti-clockwise tendency will become even more.

That’s what I said. You mean the animation is wrong? I doubt it.

Oh yes you are right sorry. I see you are both right. He said his Cabri turned counterclockwise. Therefore his Cabri’s rotor is turning clockwise then.

I hope Asobo will make an official statement and provide a fix. I have no idea why some users have these issues and others dont.

About this: With the new update, this became a problem again. I also saw this problem in the LS8 (sailplane) thread. A while agot, Asobo introduced a config option to force the modern flight model (regardless of what is set in the menu) but this option is not set in some of the new aircraft…
I created a bug report about this, please consider voting: https://forums.flightsimulator.com/t/modern-fm-only-not-set-in-some-of-the-new-aircraft

Where is that force trim command please?? I can’t find it anywhere in controls.
Thank you!!

Thank you using the Bug section, using templates provided will greatly help the team reproducing the issue and ease the process of fixing it. Are you using Developer Mode or made changes in it? No Have you disabled/removed all your mods and addons? Yes Brief description of the issue: The “Force Trim” function was mapped to the “SET ROTOR LONGITUDINAL TRIM” axis. When trimming the helicopter forward or backward (via other Rotor Trim assignments) it moves the Rotor Trim as expect…

Microsoft and Sergio Costa from helisimmer.com had a helicopter stream last night. Sergio was explaining the basics of helicopter flying and was using the Guimbal Cabri G2 in MSFS to demonstrate. There are some great tips.

Here is a link for those who haven’t seen it: 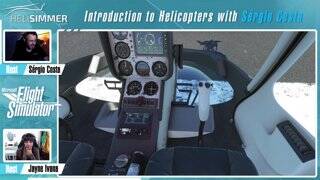 There is an issue with the power set according to the MLI and the corresponding rotor droop when pulling too much collective.

In the screenshot you can see the NR decaying into the lower yellow arc, while the MLI still only reads 77% in FLO mode. The power should not run out below 100% and the governor should keep the NR up until the throttle is fully open and the engine produces maximum power.

I presume there is an issue with the MLI power indication, since the throttle seems to be fully open at 77%, which should definitely not be the case.

Also I found it impossible to pull more than about 83% with full collective up, which doesn’t make any sense. 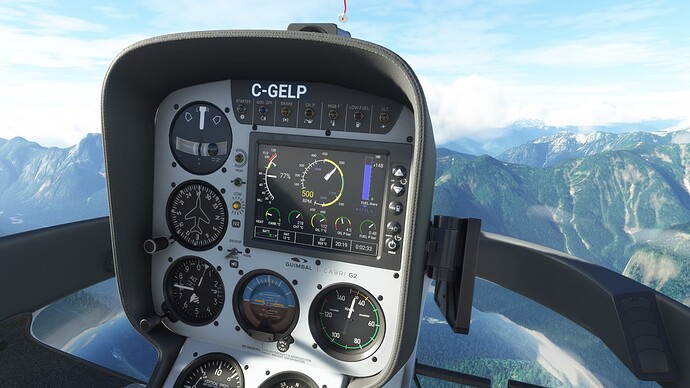 I’ve only had a couple of hours on the new helicopters, but very impressed so far. Yes, a few tweaks to control mappings and turning off all the assists were required to get them to my taste and the forums helped a lot.
The standout feature that I would like to see implemented asap is the ability to autorotate and have to manage the rotor speed as in real life.
There is much work to do, but a great start for us long waiting rotorheads. Thanks.

Many people have already been able to auto rotate. 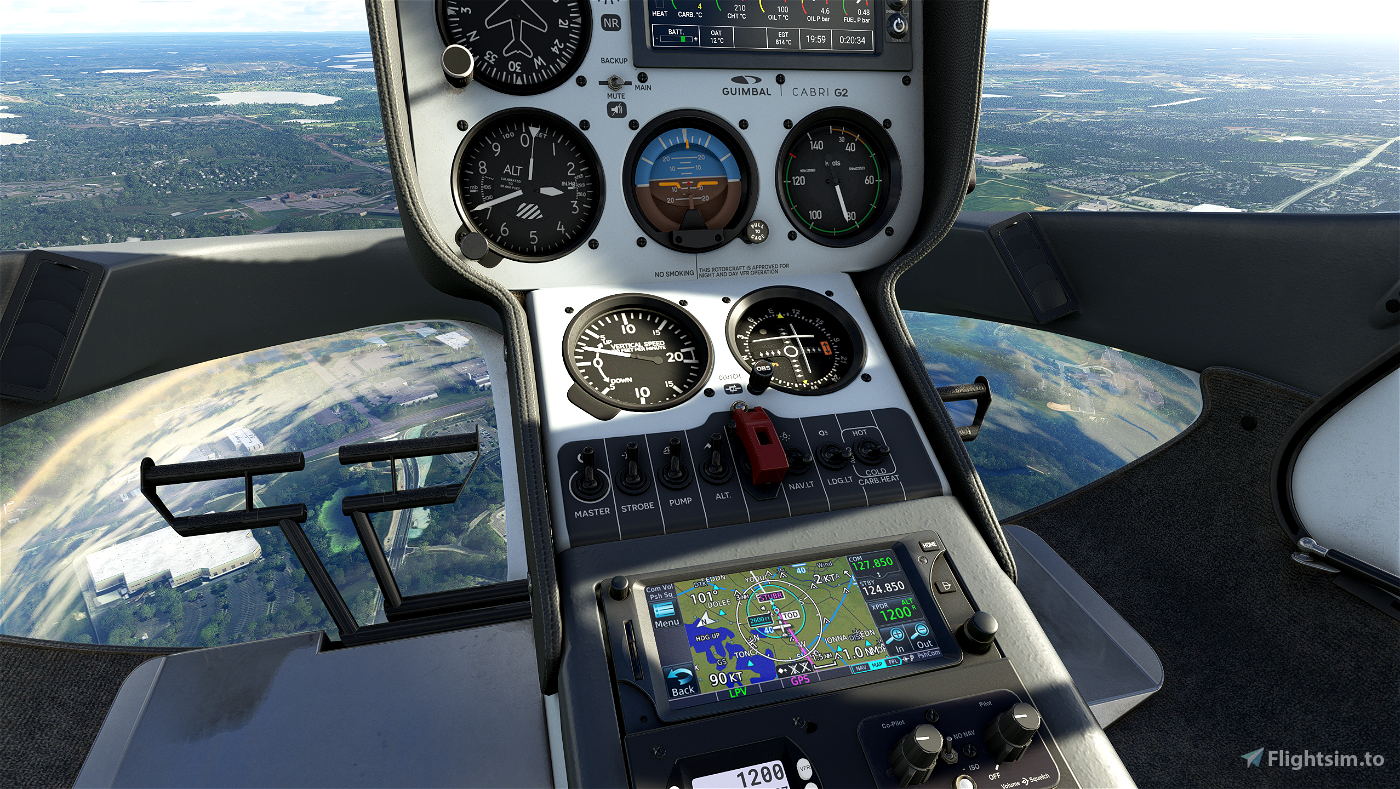 Is that true autorotation? ie being able to separate the rotor from the engine. Can you point me to a video showing that please, perhaps there’s a mod out?

My experience so far on the sim is that the rotor needle just stays in the green no matter what you do, which is not autorotation. It’s as if there’s no freewheel. if I suddenly lower the lever in the real aircraft I would expect the Nr to increase rapidly to show a split and would need to control it within limits with the collective.

It may just be with custom airports, but I’ve had quite a few issues where depending on where you pick (gate/runway/parking spot) to spawn at, the loading flight screen will just sit there and load forever, but never launch the actual flight.
It’s only with helis I’m seeing this & mainly at custom airports although some are default, and it’s mostly been the Cabri I’ve been using.
It’s annoying because there is no way of telling what will work and what won’t (airport/spawning wise) and I have to end up killing FS from the windows desktop when it happens as there is no way back.

There are also some helipads with issues. If you pick the helipad like its a runway and hit set as departure without picking an actual spot, you can spawn atop of the heliport building roof.
If you want to see this in action try spawning at Manhatton heliport for departure without selecting a parking spot.

We have updated the Known Issues list with a couple workarounds for helicopters:

Below you will find the list of known issues as well as potential workarounds or solutions. For a more comprehensive list of bugs and feedback already tracked or under investigation, visit the foru...

Is that true autorotation? ie being able to separate the rotor from the engine. Can you point me to a video showing that please, perhaps there’s a mod out?

My experience so far on the sim is that the rotor needle just stays in the green no matter what you do, which is not autorotation. It’s as if there’s no freewheel. if I suddenly lower the lever in the real aircraft I would expect the Nr to increase rapidly to show a split and would need to control it within limits with the collective.

where did you find the G2 manual?

A little off topic … but for all “Hotas Warthog Joystick” users
For me, this video was a game changer for helicopter flying.
If you don’t like it, you can simply set it back to the default state. 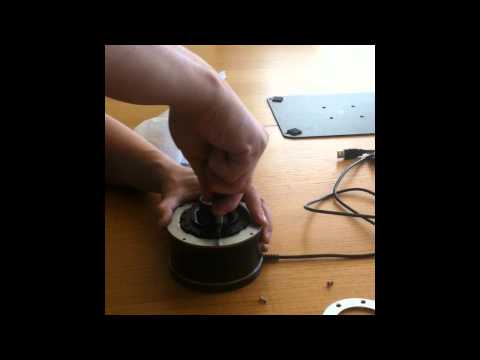