as the helicopters arrived us, a lot of us was shocked how worst they fly - but only five minutes later we found the solution : the assistant is per default enabled. Disabled that and “oh yeah…, that was so much better”.

Thus, I would say there are much more users which not agree with statements like:

There certainly was. I had the pedals bound to “rudder” instead of tail rotor pitch. Nothing wrong with the pedals themselves. Assist didn’t seem to matter either way.

Hi, I’ve have the same problems of LeadZeppelin316 on Cabri G2.Display is off after 1 minute but the rotors are running. I was looking for the switch of /Generator/Alternator but couldn’t find it.Can you please help?

OK got it,thank you. .My hope was there was some others switches to set on .When I start from the runway everything is running well ,the switches are all set to ON but after less then a minute the displays are all going off,rotors are running and I can fly (learning to fly…) No ways to set them on because they are already on!!. Do you know what I am missing to do?

EDIT :I’ve found the culprit !! I had my Thrustmaster throttle quadrant plugged on. I just unplugged it and now everything is working fine.No dark screens anymore.

Glad you solved it out

1/ when you do not know where a switch is, open the checklist and use the eye icon to find it

2/ I use my Thrustmaster Warthog two-lever throttle for collective and throttle so it may not be your quadrant but a binding of one of its physical switch to the alternator function. It does not always work well.

Did you solve the problem?

I had the same issue and I found a solution. I have a TCA airbus addon and some keys may effect the issue so I deleted other key and axises allocations escept for one throttle axis and solved. Good luck!

Yes,happy to have solved this prolem.

With ref to your comments :

I don‘t see how just eliminating one the major forces in a helicopter is supposed to be more fun or realistic. But to each their own.

The assists, in effect, do not “eliminate a major force”. The assists, while simple, actually allow the sim to behave in a more realistic manner. The actual forces are set by the laws of physics, not some arbitrary personal taste.

Fighting for stability while attempting to hover near a national monument is not fun to me and it is not realistic as simulated without the assist, but hey, if you want to “fly” something that doesn’t exist, have at it. That much we can agree on.

Torque effect is an actual thing helictoper pilots have to deal with that results from the laws of physics. You think it’s badly modelled in MSFS because it doesn’t simulate physical forces acting on your body and thus decided to turn it off? Good for you. I don’t think, however, that your gaming experience is any richer or “more realistic” for it.

In the meantime, I’ll continue to have fun dealing with this effect that is inherent to how helicopters work. Even it is a bad approximation of the real thing, it is fun and most people don’t seem to have the kind of issues dealing with it that you have.

Gee, nothing personal, dude, it’s just that I’m not an extreme sports enthusiast.

The non-assisted flight model is a raw math, limited accuracy model anyway. That’s why it is unstable. The damping of the raw variables (assists) is more like reality due to the friction of parts, uncalculated physical variables, etcetera, as explained earlier. If you disbelieve me, I suggest you read up on it. It’s been 25 years since I worked in the business but I remember how those models work.

If you want a challenge, I suggest flying that space plane from that FPS that they released in one of the last updates. Fly that guy through the mountains in bad weather and see if you can keep from hitting anything. If you’re good with the SDK, perhaps you could set up an obsticle course and gain high numbers defying simulated death.

yes,… but if feels that is is all about your personal opinion you mention again and again since a long while and is mainly that the flight-model is not realistic. And now you mention a new personal opinion that enabling the assistence is the real-flight-model, where in contrast of that a lot of heli-simmers feel, that fly with enabled asssistence is like a “play a gta5 game”.

I’m not sure which kind of simulators for helicopters you tried, but the flight-model of msfs isnt so bad. As example try to hover in DCS ( just wait for the free-try-periods ) , or try xplane, or may be Prep3D - after that we can speak about that hovering in MSFS is difficult

We spoke so often why it is more difficult to hover in a “simulation”, e.g. absense of a lot of senses we have in real , usually no 3D, etc etc… So why we allways start the discussion again, that the flight-model feels not good for you. You can, also again mentioned, try out a flight-model which is not from MSFS - check marketplace for the Bell47.

If you personal like to fly with assistencs on, then just do it

… it’s free a world. But its not good thing to tell, that this is then more real-world. I still not use the assistence and I can easy hover in front of what I want so visit…

So. yes… Happy flying y’all! … with the setting you like at most.

Unfortunately, I don’t have the time to read everything in long thread so I don’t always know what’s been covered…

hmmm… you spoke together with us ( in the G2 and the Bell topic ) , hope you can remember your own posts and the answers for that

My motivation is to mention, that your “trueness” is not necessarly the real “trueness”. Therefore we discuss here. Some users accept what the majority wrote and stop to mention same thing again and again, and rare other users repeat again and again her own personal opinion , just in slightly different words and or in the Bell or G2 topic.

We, I gave you a lot of helpfull answers… how you can train to fly, how you can setup your sticks, we mention that for the majority of the users the flight-model is ok, ( in special for a first version ), that disabling assitence is more real, that the G2 modeling seems more final than the Bell407 and so it have less little issues ( e.g. throttle sensitifity ), we compare what we get in MSFS with what we know from other simulators and also other flightmodels which exists in parallel in MSFS too, etc… In special the last point would mean, that all other simulators/flightmodels on the market are also not realistic, if your statement would be correct. The assist affects as example how you need to use the tail rotor, etc. It is may be helpfull for users with a xbox controller, but enabling of such “helpers” have nothing to do that the helicoper flights then more real - its simple more easy to fly. And we speak not about math, its all math, the whole fligth-simulation is math. We speak about what most of us expect how a helicopter reacts.

So, what else we,I can say. If you assume the more real flight-realism is with enabled assitence, then just enable it - I mentioned that. Nobody here wrote against that. Choose the settings where you have fun with MSFS.

Other users, which own may be a better stick-setup and want to fly helicopters more real, still disabling the helpers.

I’am still happy with both of the new helicopters and assistence off is mostly what I expect how helicopters reacts.

We really need Asobo to implement a force trim function. As a former helo pilot, flying a helo without force trim is miserable. 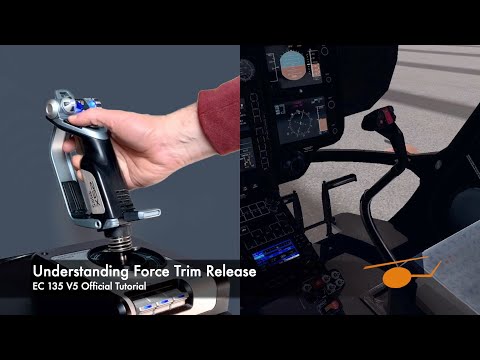 I have bound the POV hat switch of the WH joystick to the pitch and roll trim functions. When I push the switch forward (an example) the cyclic pushes the nose down and keeps it this way. Isnt the same ?

we need one button for that

May be, let me explain bit more: what you do with the POV trim, is of course a “trim” ( I use that too as currentl workaround ), but it is not a one button force trim which takes direct the current position of the stick as the new center and then you do the fine-tune with the pov-switch. It is a huge difference, trust me. Differnt kind of simulators have that implement in different ways and e.g in DCS you can often choose different ways to set the force trim.

Thank you for the clarification, appreciated.

I read over again the Guimbal manual. It seems that the Cabri has no force trim of that sort, none is mentioned at least.

thats true, lots of helicopters not have that in real. But what real helicopter have, is a “real half meter stick” and not only a little spring-based-joystick. Therefore that feature can be found in most simualtions

Good input. Thanks for that. I’m seeing the same. I guess I was spoiled flying $20M Blackhawks 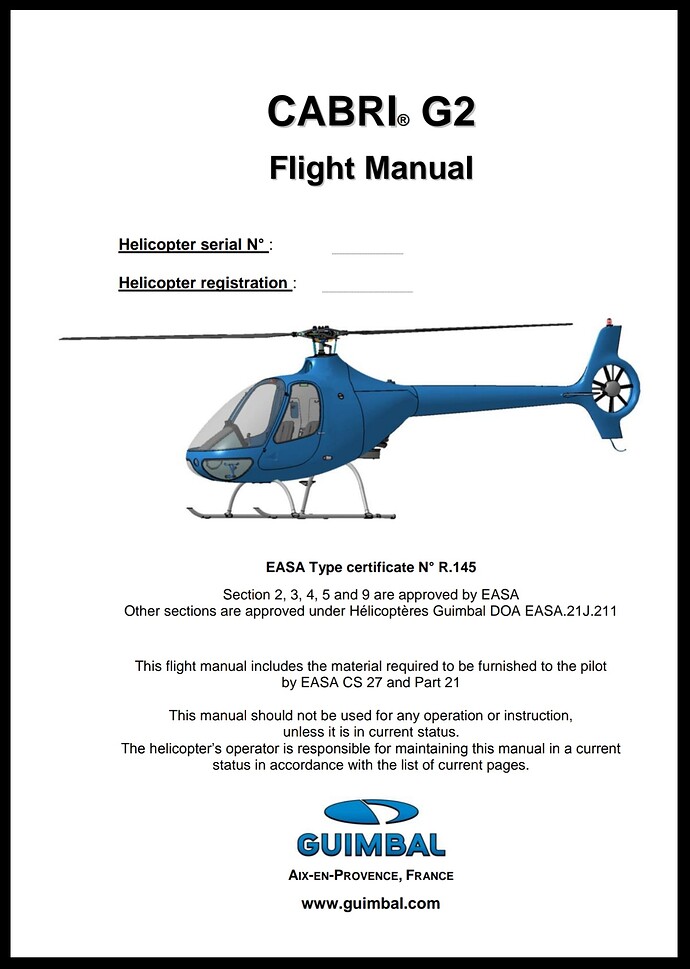 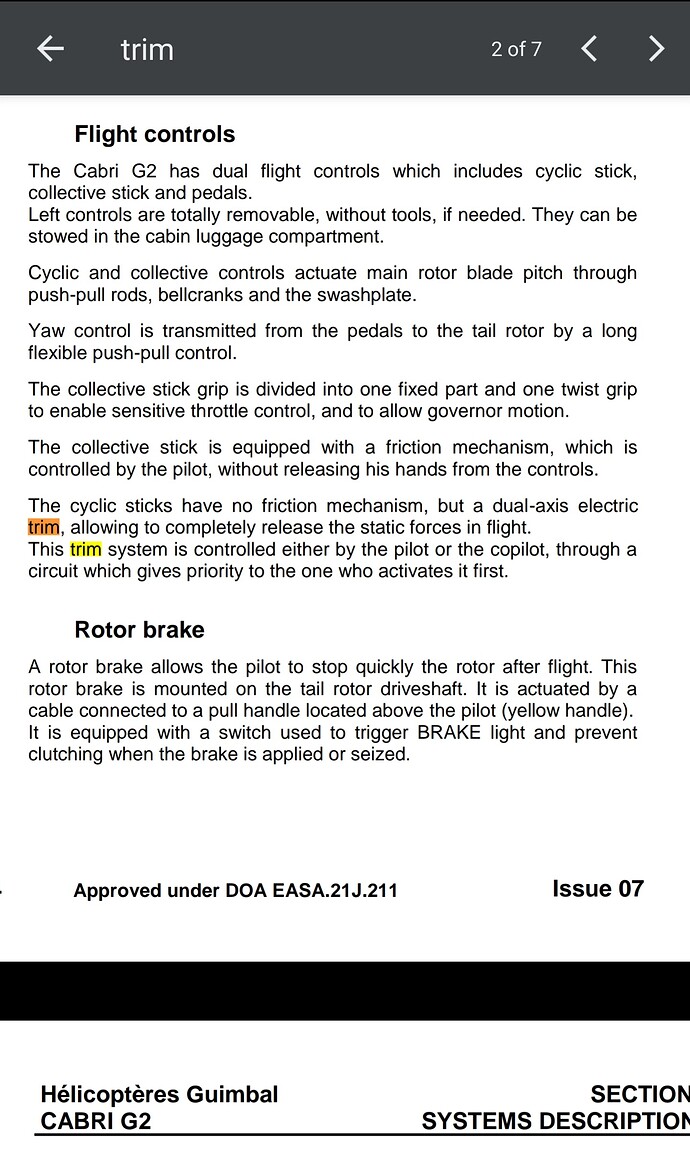