The problem I have is during a flight with an average of 35 fps that suddenly many times the plane is
hanging in the air for half a minute and also I see the fps going down to 18-20 and after a minute it is normal again. I tried it in several areas and mostly it happens area los angeles.
in another thread I thought it was maybe the PSU and today i bought a better one but still the same problem. Also went down in grafics but didnot help either.
I overclocked my I9900k to 5.0 ghz but without results. it could be my grafic card and measured some items which I dont understan. Perhaps one of you could give me some information.
I have a 1080TI and the I 9900k and mobo Z390 and PSU 850 gold version.
the test was CPUID and gives GPU 100%/gpu mem 80% and frame buffer 35%.
If I look in the game to dev mode then below I see GPU mem budget 6000/10500
could someone let me know your thoughts? b.t.w i have kingston mem 32 gb

Could be many things, but personally what I would try first if you haven’t already is using the Nvidial control panel to limit your framerate to 50 (or 40, 30 whatever you are comfortable with). That seems to stabilize the sim a bit and stop that sort of thing. Do that first. (BTW, i also run the Z380, 850 PSU, and 9900. Overclocking is really (IMO) no point here in this sim. 32G Ram should be fine. 16G works, but I have seem different opinions from people on that. I have 64G so never been real concerned about that)

We have same gpu and cpu but im with 650w psu and works just fine so it wasnt your psu as you said too.
Do you have modded game and which versio, steam or ms store ?

Overclocking is not something you do to troubleshoot issues since it alone can cause them - if anything you remove ALL overclocking, XMP included.

What resolution and graphics settings?
What form of OCing, XMP, etc used?
Mods used if any?
Windows 10, drivers, etc updated?
Have you tried a clean GPU driver install?

XMP is not overclocking, just sayin’

XMP is not overclocking, just sayin’

I think you are “confused”, XMP is overclocking.

Intel® XMP allows you to overclock DDR3/DDR4 RAM memory with unlocked Intel® processors to perform beyond standard for the best gaming performance.

The memory you’re buying is advertising the XMP speeds as rated speeds.
What you’re looking at is just Intel covering their behinds lawyer wise (so that they’re not liable in case of RMA requests). 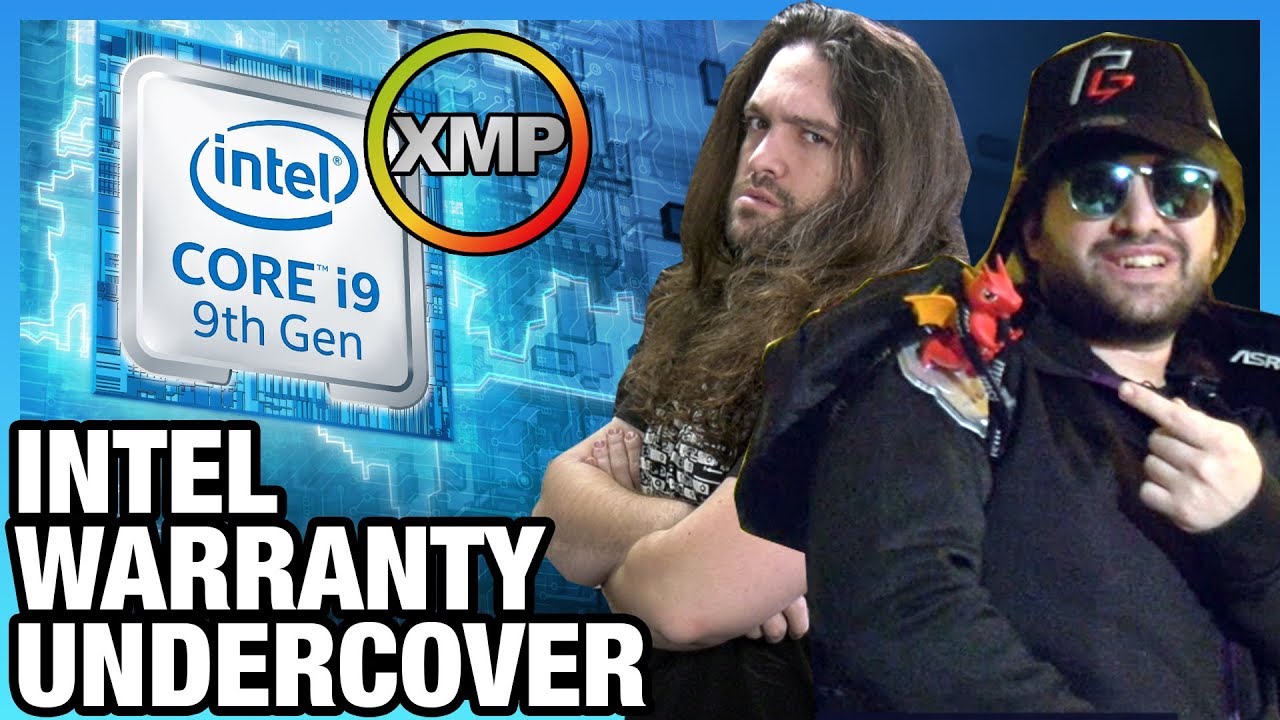 If you purchase memory that advertises XMP speeds, it is rated to run at that speed. If you’re not running it on that XMP speed, you’re leaving performance (which you paid for) on the table.
Might as well have bought 2133MHz memory then.

I would consider going faster than the rated speed, or using tighter timings than are listed on the XMP profile as actual overclocking. Not the ‘Intel lawyer’ interpretation of the term.

Call it what you wish, but when RAM is a base clock of 2400 and advertised at 3200, for example, you are overclocking it automatically (XMP profile) or manually to achieve its advertised speed.
XMP Profiles are not always stable because, again, it is an overclock and thus some users have to manually clock their RAM to achieve advertised speeds.

It’s called overclocking if you’re running it outside of advertised specs. Regardless of what Intel’s lawyers have to say about it.

You’ve got a ‘OC’ video card. Are you ok running that at 500Mhz under its advertised speed?

Do you go around quoting YouTubers and their opinions all day? Let me quote a few sources for you,

“The other type requires XMP, which is classified as an overlocking product.” " Another situation is when the memory belongs to the type that requires XMP, but you haven’t gone into the BIOS to enable XMP after buying it home, then it will only display the frequency without being overclocked. That is why many consumers bought 3600MHz home, but only showen 2400MHz." - TeamGroup.

“Overclocking is the adjusting of the standard specifications on memory modules, CPUs, and GPUs, to eke out better performance. For example, raising the clock speed and lowering latency (wait states) of industry standard values (JEDEC) on RAM can significantly impact PC applications.” “HyperX Plug N Play is a memory overclocking concept pioneered by Kingston. Featured on the FURY and Impact memory product lines, HyperX Plug N Play is auto-overclocked memory, with presets that are configured by our engineers at the factory.” - Kingston

“When you install memory in a system, there is a set of standardized speeds/timings your memory will run at. This standard is called JEDEC. This is why you see DDR4 memory speeds like DDR4-2133, DDR4-2400, DDR4-2666, DDR4-3000. These are standardized speeds that all memory manufacturers adhere to.” - Crucial

“Realizing that most users won’t manually overclock their memory to reach its rated above-standard rating, Intel developed an extended configuration table that’s stored on each compatible memory module’s EEPROM (a tiny flash storage chip), alongside the industry-standard settings which the memory will usually default to when first installed.” “XMP is an overclocking technology.” - TomsHardware

I am gonna go with those sources over a Youtuber, no offense to the Youtuber.

Regardless, for the sake of troubleshooting, it should be disabled along with any/all forms of overclocking.

It’s called overclocking if you’re running it outside of advertised specs. Regardless of what Intel’s lawyers have to say about it.

… and yet many RAM manufactures explain not only that the clock runs at a lower speed to ensure a bootable system and XMP is a smart/preprogrammed automatic overclocking profile/preset, but also how to appy XMP or manually overclock to advertised speeds/specifications provided with the RAM.

You’ve got a ‘OC’ video card. Are you ok running that at 500Mhz under its advertised speed?

The whole discussion missed a little bit my first question which has to do with the figures of the 1180TI.
the mem is not the problem I changed from 2400 speed to 3200 speed and it makes no difference.
also I tried to grade down with the render from 3840 to 1920 and in between.
it becomes a little better but not as much. the same with changing from a320 to mooney carenado 20 m.
a little better but sometimes it hangs for a short while for 2 or 3 times.
So my question is could some have a look to the measurements of the card and is there someone
who knows if I change to a 2080TI extreme will solve the problem
thanks in advanced

in this video he states that long term hangs can come from priority settings for the FS2020 app (about 15 minute mark I think) perhaps something to look into. 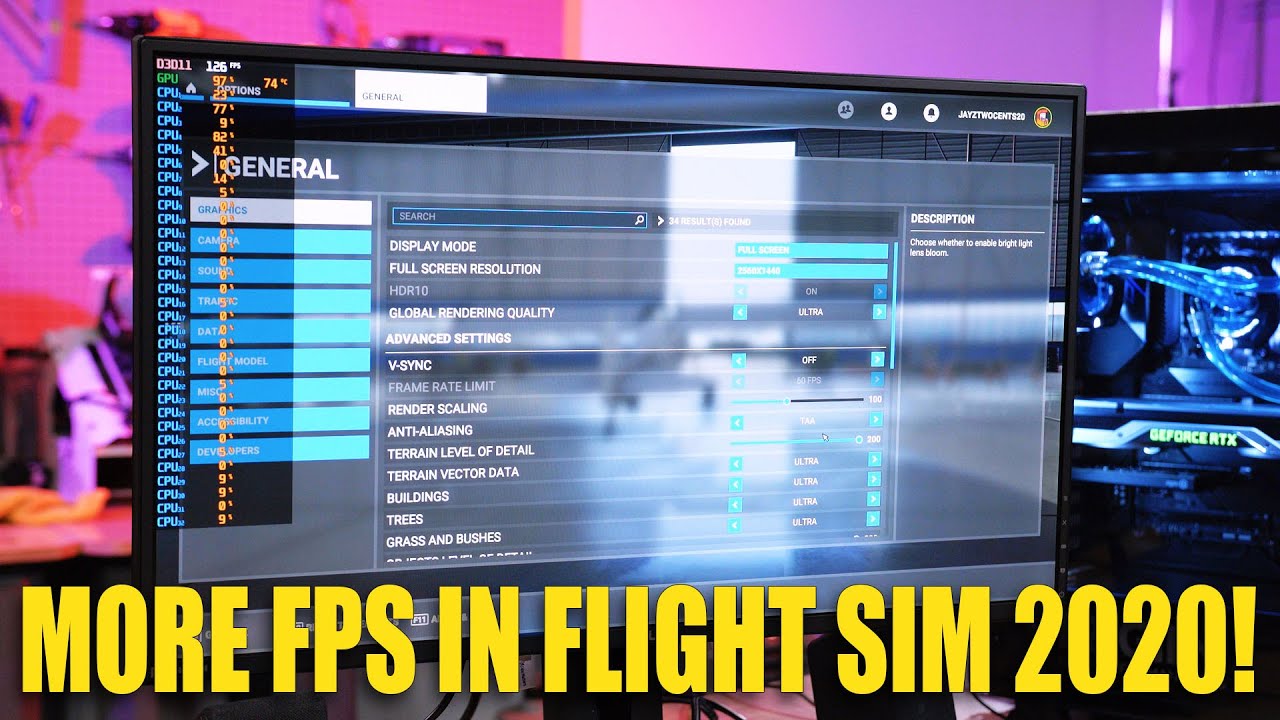 thanks I already had these optimalizations.
I bought the 2080TI tomorrow I will install it and see what it brings.

tell a bit about

But how this can explain : “hanging in the air for half a minute”… I’am not sure.

). How strong is your pagefile used ?

4.7 pagefile. in the meantime I installed to 2080TI but there is not 1 framerate more and the result of low fps during landing is still there including some hicks ups and a short hanging of lets say 5- 10 seconds.
for the rest of the flight I have an average of 35 frames.

At which Airport you have low fps ?.. There are some which are realy hard ( e.g LFPG ~20 ). Rare hicks are possible… but these “hangs”… hmmm

I uninstalled the 2080ti and sent it back, no difference so now I have the 1080TI again.
I skipped my anti virus software and it is a little better now more stable so to speak but I have not a clue what it has to do with it.
I fly from john wayne airport to los angeles and flightplan 24L ils. it went via crcus. after the left turn straight to the ils give problems with the fps and most before and during ther glidescoop.perheps you could try this to see what happens with your configuration.
I wil try tomorrow lfpg. thanks in advanced.
is it a good idea via afterburner to OC the 1180TI?