Have not seen any Seafront Simulations boats since SU9

I don’t find any boats. I will check English Channel tomorrow. But I flew all around Spain today with 100% boats and ferries. Nada.

They released an update a couple days ago (there’s a post on the forums about it as well).

The Vessels: Core Library has been updated to version 1.7.0. This includes a number of model optimizations and LOD improvements to enhance draw distance and performance. Note that this will not resolve the traffic performance issues that have appeared post Sim Update 9. We continue to investigate this with Microsoft and Asobo. Currently the release is available via Orbx only (for free as always) but it is in the test and release queue for the Microsoft Marketplace. Seafront Simulations | Vesse…

Even if he update, it won’t resolve problem

i seen boat, but don’t sure it works ok now, but indeed i saw some there some here, as remember israel, japan, austarlia(east coast)

Interesting to read this. I’ve been suspicious for a few days that something is up. With GAIST also.

Flying at Dubai and there are zero ships except some static ones that I think are part of the Orbx City Pack. Don’t see any ships randomly sailing like I used to.

Tried a few other locations and do see a bit but nowhere near the density of what I remember.

I have the Seafront GB South East and around Southampton / Isle of Wight it seemed more packed.

Hard to know what is coming from Seafront Global Traffic / AI or the actual Vessel region packs and what is from GAIST v2 though! Something seems off though for sure.

There is always something to chase, check and fix in this sim lol.

For sure SU9 has borked their global shipping, it’s like someone has turned the dial from 100 down to 2.

That’s odd. Hope the developers actually KNOW about it. And can then fix and update it without too much hassle and delay!

Hi @Baracus250 @FUFJJ - Are you able to share some more details about your platform, hardware and settings? I have seen the performance impact since SU9 but not a drop in numbers of ships loaded in. If you are on PC you can go to Developer mode and then in the top bar select Options->Sim Objects->BOAT->Names and it should show you how many boats are loaded in around you. At LXGB (Gibraltar) this should be around 100 or so if it’s loading them in correctly. For the performance issue I am waiting on the hotfix and a response from Asobo before I can confidently make any further changes. 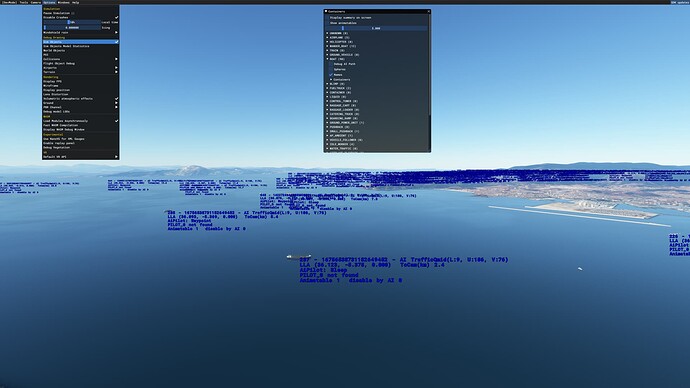 I have PC. Windows 11 i9 10850 with RTX3090 and 32GB RAM. Its a HP Omen. I flew yesterday from A Coruna Spain to Nantes France. I saw 4 boats. I will try the dev mode tonight and let you know. I normally fly in VR with Reverb G2. I have render scaling 100% most other settings (Buildings clouds trees) High. Ambient occlusion off, Water waves medium. I have traffic (Boats and Ferries) at 100% for VR and PC. When I “notice a difference” I flew from Majorca to Faro in Portugal and the sea was really bare of boats. I really notice the add in when going over the English Channel. I normally get a good performance with no stutter. Pre SU9 I had sea traffic set to around 60% and was seeing quite a lot of boats over the river Thames and the channel. As this test I increased to 100%. Thanks for the Dev mode tip I will try.

Xbox X. I flew up from Calais to The Hague low and slow and saw maybe 5 boats? Before the boats were everywhere. I have the traffic set to 100% which worked on SU8.

Hi @RagingWombat839 - I have noticed that sometimes (historically) the traffic settings get ‘stuck’ and need you to enter a flight with zero traffic and then another with it set to your usual level (i.e. 100%). I tested on the Xbox Series X yesterday and saw the expected number. It might also need a reinstall of the Core Library and Global Shipping. With the servers being up and down there’s a chance that you only received a portion of the ships in the pack.

I deleted the global, library, and Anguilla add-ons. Now downloading library and global again to retest.

I note that you have version 1.7.0 of the library above but 1.6.2 is downloading from marketplace, so perhaps I just need to wait for marketplace to get the new version?

Reinstalled and restarted the sim, now I count 20 vessels in all directions as far as I can see, using maximum zoom. This from the middle of Gibraltar strait. It’s a big area so this is quite sparse, I’m sure it looked busier on SU8.

Here’s what it looks like from 6000ft looking east over the strait. 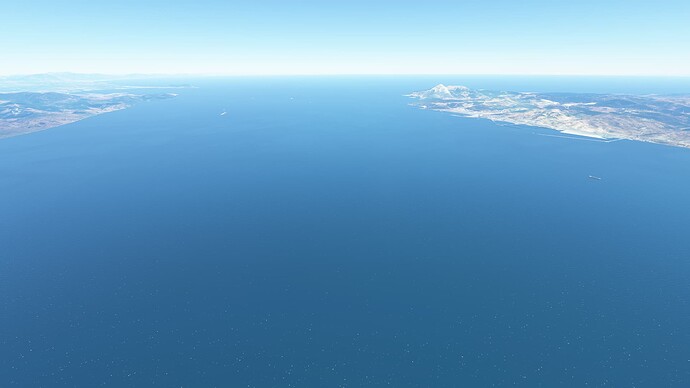 A few ships at Ft Lauderdale: 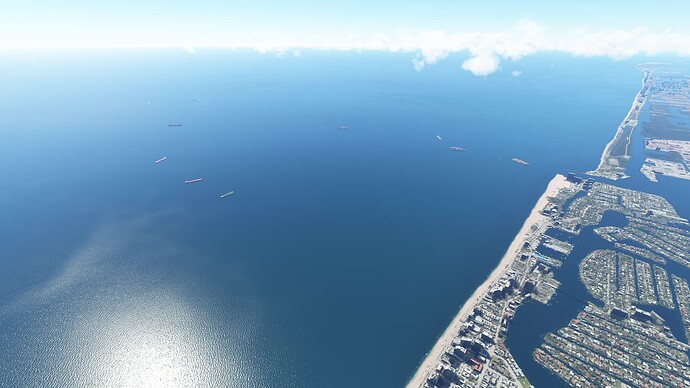 @SeafrontSims I was in Gibraltar. I follow your suggestion. I have 90 objects loaded.
I am in Nantes to Jersey. I have 6 objects. So I suppose it’s ok?
By the way, thank you for your responses and the great product. Much appreciated - John

Sorry for the delay in replying to your response.

I have tested a few locations out now with the Dev Mode “boat names” summary as you suggested. Had only a bit of leisure flying time so didn’t want to spend it “testing”

Traffic sliders for Leisure Boats and Ship & Ferries both at 100%.

So it does look like it’s working but it’s weird that what prompted me to write in this thread was the fact that I didn’t see any in Dubai. No container ships in the distance. No leisure boats. Also yesterday was flying around Orkney Islands (Scotland) and saw absolutely nothing at all?

Today, in Dubai I do see them as I remember and Portsmouth is really busy. The 100% sliders maybe too much as my PC was lagging a bit (also have detailed airports in the area and it’s got photogrammetry here).

Strange that if I slew a bit further (using Dubai as example about 20 miles away from the main city area), the spawned number goes down to like 7 to 10, then if I wait it repopulates to around 40-50 but then I can see many of them despawn a few seconds later and it’s back to around 12 again. Waiting or staying in the area doesn’t bring more back. Not sure why some would despawn after time but maybe that is a clue to what’s happening and why it’s empty sometimes?

NOTE: I do also have the GAIST mod installed. I guess the totals include those ships. Is it not really a good idea to run both addons together?

Not really sure how to tell what is from what.

As a test in Isle of Wight I turned traffic sliders down to 35% and restarted the flight. The summary now says zero boats (but 15 in brackets on the popup Containers window) but I do still see a lot of boats. It’s not lagging now though. Are those boats static from your South East GB pack?

EDIT: Tried same test at 80% and 90% and it says zero boats. Going back to 100% and restart only gives me 8 boats now. This is really weird. A bit different to 250 with same setting before!!

EDIT 2: Seems you actually have to go back to main menu and load again for traffic density sliders to have effect. So at 75% I’m getting ~210 at Isle of Wight now

EDIT 3: Tested Orkney Islands with 75% on sliders. 24 boats spawned, but all very far away. Wouldn’t have seen them unless I had Dev Mode labels on.

Shouldn’t there be some traffic in amongst the various islands?

@SeafrontSims I upgraded the library and I installed the free Channel Islands add in from Orbix. Now I have a problem. South of England might be full but North of England not… get busy…

Hi All - Asobo have identified the bug (a change to the way FX are handled) that was introduced with SU9 and impacting performance for our products. They are working to implement a fix for SU10. In the meantime thank you all for your patience.

No worries - thanks for the update. Has that also affected density in some areas?