Help with slow performance on extremely high end PC...not sure what else to do

Hello everyone. I am at the mercy of this forum. I have watched countless videos and searched these forums for tips with no success. I have, in my opinion, an extremely high end PC and still with most settings at LOW I get no more then 30 FPS. There has to be something wrong. On ultra settings I get no more then 20. I am using dev mode FPS counter in-game and I also notice it always shows “limited by GPU”. Here is my system.

Not sure what other specs are needed to be listed. I have checked temps and during gameplay they are around 45-50c. I am at my wits end with this. If anyone knows why this might be happening that would be great!

Like you, i do believe you have an extreme system, you’ve dumped enough money into it for sure! (are you a graphical designer by any chance? wow)

In the next update, multiple monitors will be supported, so for now, breaking out a second monitor is the main fps killer for most… but i seriously haven’t heard of Multiple GPU support so far, as even i thought that running duals like the previous SLI was a thing of the past with these more powerful cards, certainly the 3090’s… it almost feels like the second 3090 is trying to overrule the other 3090, so is there any software running to keep the two of them working together?
And no, i have no experience with your setup at all… but i am however curious enough to post a daft question:
What psu are you running to keep that system activated and, just to keep a happy note, what type of generator/powerplant is outside your house… as that is certainly a VERY beefy system. This one is way out of my league, Demariners, but my other question would be, what other games are you running on this monster?

Without knowing any of your settings, and the fact your question has been pondering for 5hrs here, here’s what i’d start with: (and i have no clue if you’ve actually checked everything, or that you’ve only focused on what’s inside the game/sim… sometimes even reverting to a newer or older graphics driver, ((be sure to do a clean install)), might actually help)

The main “eaters” of FPS during gameplay are indeed your pixels, your monitors hz (if there’s a difference in hz throughout the monitor setup, i do believe that might kill quite some more fps as the GPU is trying to keep them up to scrap at whatever the cost) then ingame the pixels setup needs to be the same as the monitor, so full screen resolution, needs to be the same as the render scaling to start with, if there’s fluctuations, the gpu will try and compress or decompress the textures which eats up render time. Stretching flightsim over multiple monitors has been proven to cause severe issues, but you mention just using one is already causing issues. Btw, have you tried Hags on/off? (usually the performance of 3000series cards warrants hardware accellerated gaming to be on, whereas the older gens need this setting to be off in windows settings.

Also, with the newer monitors, when turning them off, they actually eject themselves from the system alltogether, so the gpu’s dont actually render for them anymore… my older/secondary monitor, actually stays in the system when i turn it off, whereas this newer 3440x1440 actually ejects itself and no longer shows in my nvidea driver settingspage or windows itself… if yer not using 'm turn 'm off?!?

That’s all i got for right now, sorry.

ps: You’ve mentioned you’ve played around with the settings from Ultra to low but that’s actually the final tweaks after you get the basics right.

For GeForce RTX 3090 and future SLI-capable GPUs, SLI will only be supported when implemented natively within the game.

Rocking Dual 3090’s seems to be “not supported in the current state of MSFS”, maybe as of the next update, dont know. sorry. 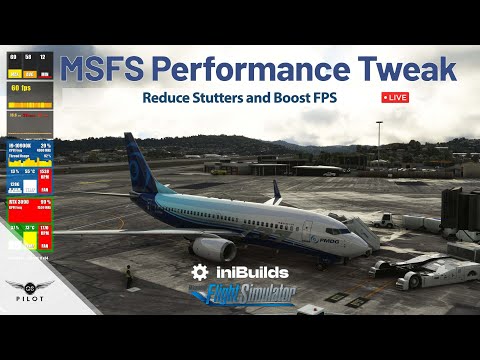 Try these things. I noticed a slight difference after.

Turn HAGS off, game mode off and only use one gpu, also 256gb ram is way too much for gaming and can cause performance issues. Have you enabled XMP profile for ram? Maybe try with 2 monitors and see if it helps.

On ultra settings I get no more then 20. I am using dev mode FPS counter in-game and I also notice it always shows “limited by GPU”. Here is my system.

can you describe on which location you measure that ?

Your system is more a video-editing system, than made for gaming ( and SLI, it is’nt same as in the “old” SLI ages

… it is dead in generall and I assume the 3090 may be last card which can do that. At least dont expect much more performance. )

The only thing I wonder is “limited by GPU”. Normaly the most of us are limited by one core in some specific situations ( e.g. on ground , airports, etc. ). We need some more informations what your final resolution is, with 5 monitors … A 3090 is not a magic-wonder-thing ( and we had users which played with 30 megabit resolution and wondered about performance problems ).

More common might limited by CPU: I assume you have tLOD setting at >200 , thus reduce this to 100 an start slowly to increase. Also seems there are some performance issues ( e.g. again on ground ) if you have photogrammetry enabled - just a test-case worth. Also some mods , additional apps ( e.g. AIG ) can cause low fps.

And also I assume you externalize lots of dials , maps, dialogs… and there is a issue in which these lowers the fps too ( I not know the current status about ).

There are so many factors…

) and buy yourself a 4090 equipped PC which should give you the 2x graphics performance that you originally intended.

Thank you for all the responses!

I am going to try with one video card and see if that does anything. I guess I could remove the memory but I had far less and it was doing the same thing. I upgrazded the memory thinking that would help. Yes my memory is set to XMP.

As for monitor I have a Samsung Oddesy 9 ultra wide. I have tried 60 and 120hz. It is set to GSYNC but I have also turned that off and tested. Same results. Lowering resolution doesn’t seem to do anything. I have also tried different AA settings. Currently the best seems to be DLSS and balanced.

I am going to remove and go to a single card and see if the issue goes away. Not sure what else to try except getting a more simple system.

Not playing ANY other game. Simply MSFS. I thought more is better!

Also I misspoke. It actually is more mainthread limited

That explains it a lot more, 3/4 of your cpu cores are wasted and 3.7 GHz is not particularly fast. Turning off multithreading and virtualisation in bios would be a good start. Also enable PBO for better boost speeds, I suggest you just let it do it’s stuff without manual intervention.

I think others have already hit it. The Threadripper is definitely beefed out on cores, but not core frequency. The issue is DX11 gets bottlenecked at the mainthread - usually a single core running near 100%. Therefore MSFS performance is usually improved with increased core speed as it can reduce some of that mainthread bottleneck. The 12900k is one of the best for MSFS performance because the near 5.5 Ghz single core boost speed is very high. This why lowering your terrain LOD helps improve performance - higher terrain LOD settings significantly increase the load on the mainthread. Using terrain LOD settings >200 require a beefy processor with high single-core boosting - usually around 5 Ghz is that “magic” number.

Also, as has been said, disable SLI if not already done, as it’s not supported by MSFS.

Also, as has been said, disable SLI if not already done

I don’t advise this, he has 5 monitors so his twin setup must be doing something to not be gpu limited at such low LODs. I would say it all comes down to the resolutions and renderscale he is simming at … and for that we need more information.

What other information would be helpful?

I went straight vanilla. No SLI. Removed down to single card.

LOD is the culprit. Anything above 50 kills FPS. Also, while already noticed, PSXT is also a FPS killer.

Traffic is also cpu heavy, so lower your traffic settings or turn off all traffic.

LOD being the primary issue is pointing to the processor as the main bottleneck. Terrain LOD puts a significant load on the processor. Terrain LOD at 50 is quite low considering most of the flagships (5800X3D/5950X and 12900k) can easily push 200 comfortably and even 400 with a slight performance loss. You can try lowering your resolution, but I’m doubtful that will help if you’re already bottlenecked at the processor. A 3090 should have no problem rendering at 4K, assuming it’s not limited by mainthread.

I have tried DLSS at balanced/performance, etc.

Lowering resolution. Has yielded not a single difference. I even tried FXAA at 20% render as it looked extremely awful still FPS was 20ish.

I might just try a new processor/setup because I don’t k ow what else it could be.

Yes it is almost always Mainthread limited. I have also set up Max Frame Rate at 60FPS. No difference.

Lowering resolution. Has yielded not a single difference.

Yes, this is what I expected. If you’re already limited by the mainthread, there is not much you can do from a graphical rendering perspective. In fact, lower resolution will usually increase a CPU bottleneck. This is why the usually do CPU gaming benchmarks at 720p and 1080p.

I don’t directly recommend people to spend money (it’s your money, after all) but I will say that I would consider a new processor setup. Unfortunately, leaving the TR4 socket ecosystem isn’t easy, as switching to either Ryzen or Intel will require a completely new motherboard and processor. The Zen 4 lineup (Ryzen 7000 series) is rumored to be out by September if you want to wait a few weeks, and Raptor Lake (Intel 13th gen) out by the end of 2022.