How do you feel in regards to SU6?

Any update on this server outage MS??? I still can’t install…

Servers have come back online at least for me here (midwestern US). So, hopefully they will be back at your location soon too!

It seems to be coming up for some folks depending on where they’re at. Still not working for me but some others are reporting some success in the last 30 min

It’s still a no go here in NJ

Cali is back online! Well almost 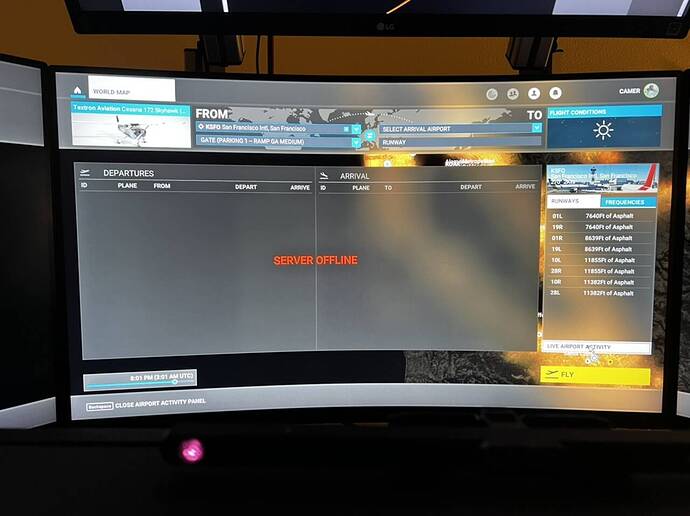 Looks like another bugfilled release to me. I downloaded the update (got lucky and did it before the server troubles started, apparently), then picked up my Norway Bush Trip, my only unfinished Bush Trip. Set my desired altitude on the AP, took off, pitched for the speed I wanted to climb, turned on the AP and set FLC mode. Then watched as the plane climbed all the way thru my set altitude, never slowing the climb and switching to ALT mode. That’s new behavior, and I’m assuming a bug. No worries, I switched to VS mode and set it descend back to my desired altitude. Then watched it descend all the way thru my set set altitude, continuing down at my set VS. Does the AP never actually stop at my desired altitude now?

That’s at least two new bugs found on my first flight with the new release.

At least they (FINALLY) fixed the “go-to” button in the XCub so it give a real bearing / distance instead of the “NaN” it used to give.

My expectations are so low now that I just assume whatever is fixed will be offset by new bugs introduced.

Edit: A day later, both of the bugs I noted have been noticed by others, so I know it isn’t just something wonky with my setup. Apparently the alternate G1000 fixed the altitude bug, but nobody has yet suggested a fix to the Bush Trip legs not recognizing the end.

1st CTD over SF! Before this update I had not had any CTD in the last week or so👏🏽

I have seen the ‘first half of runway blacked out’ at Copenhagen as well.

Guess its a new bug due to the new night light.

I did some approach tests at Vegas and Copenhagen which are third party add ons for me plus another add on and at a default airport and it seems that if you beef up the object LOD to 4 in the config file then the problem with the missing runway lights is fixed.

No lights or pink lights.

Update went fine. As a lot of people I also noticed an FPS drop. Still good playability.
I feel Asobo listens to much to a relative small group of VERY loud users who are often right but as far as the tree and lod demand to much. Yes, you can decrease the sliders, but nobody want to dumb down its settings to satisfy a small group who think unlimited view is the way to go.

Ok, so here is my thoughts. People’s pre and post SU6 experiences may differ. Also, I am on Xbox series X.

Las Vegas Addon:
Starting from the south strip by the pyramid casino at night, I was able to see the needle at the north end of the strip. I was not able to see that far pre-SU 6. At one point, the lights below me came “on” at one intersection, but generally I wasn’t getting lights popping in like before. At the needle, I was able to see the runway of the military base to the northeast. Before the update even flying over the base it stayed dark.

MMAN - Monterrey
Pre-SU6 the first sweep through the city, the building would pop-in when you were right on top of them. Now, there still is pop-in, but from a much greater distance, allowing you to see the city instead of worrying about crashing into a building when it popped in. I can’t quantify it, but it just felt better. It felt like the mountains had more details.

London
Pre- Su6, London looked like it was bombed out. Now, it’s better. But there were quite a few lag stutters, and the autogen buildings had a pop in effect as I got close to them. One area of the city, every single building was charcoal black, every building. So all in all, it is much much better than it was before, but it still isn’t a great experience.

Last airports used are now remembered again. However one weird thing, around 30 of my airports disappeared from the list of recommended airports.

I did have one CTD but it was when I first tried to start a flight from MMAN. Restarting the sim I was able to fly.

All in all, it’s an improved experience for me, but this is only after 2 hours of trying different things

Not just VR. I play on a standard screen and the shimmering is still really noticeable

Still this dark horizon line, trees where there should be no trees, missing trees in some regions, “real weather” is an estimation based on predictions (not compareable to ACTICE SKY NEXT), no foggy weather, stars in the nightsky always as if in desert regions, wind effect on trees not really visible, wind effect on high grass looks like waves on water, VFR map is almost useless (so i use a real VFR chart instead), no slippery wet grass or runway, no blocking tires and resulting consequences when braking too hard… But maybe in 2 or 3 or 5 years we have the simulator which they promised us.

Same here, trim doesnt work for honeycombe bravo anymore which is annoying as it was superb before the update. They really done me dirty on this one haha.

Smooth update. Best one yet for me. Followed all the safety checks prior to install. Removed community folder, made sure windows up to date, Nvidia up to date. Deleted cache in options. Downloaded through Windows store. On starting the sim it loaded noticeably quicker. Quick couple of flights and everything seems fine.

Three steps forward, two steps back… that typically means that while trying to fix something, other things got broke. So I read your list, and they are all future wants. Some of them aren’t even on the list of features and bugs requested which have been voted on and ranked. I’m nit sure how you can expect Asobo to address your list if they don’t even have your list as things they are to work on….

xbox series x.
Did it seem to me or the quality of anti-aliasing dropped dramatically?
The ladders along the edges of the aircraft became very visible when the external camera was turned on.

I have to say on first view I didn´t recognize that many changes/improvements. But what I can say is, they changed something about the plane´s physics in case of winds, the unsharp and pixelated ground textures, especially at the airports are gone. Also I think they fixed the issue with the clicking trimming switch in the cockpits and the issues with the trim wheels. So far, my first flight was a very great experience and I enjoyed alot, thank you dear programmers!

Only thing I still need to laugh at is the fact, that ground AI does whatever it likes to do. I was landing my Airbus at EDDF and was happy with everything. I told my Wingman at discord “Hey look, they fixed the issue with cars and trucks at the taxi ways!” 2 Seconds later: One fire department truck did a suicidal thing, the other crossed my taxiway right in full movement of the airbus LOL.

Performance is down for me and I now have stutters that I didn’t have before.