Is there a update today?

today / tomorrow - depending on your timezone. 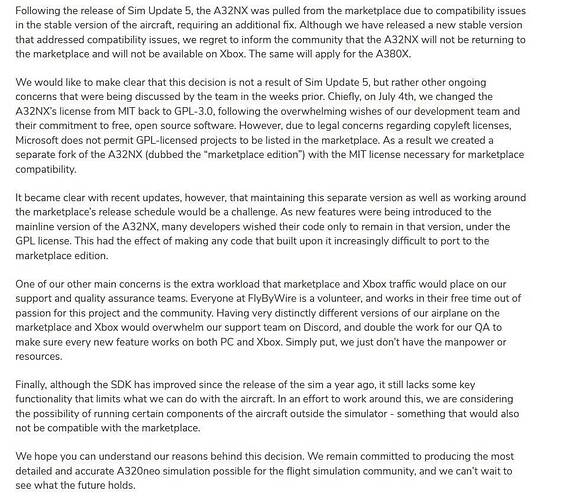 Apparently FBW released this statement. Can someone confirm it’s official?

Well, I guess that clarifies it then. Tbh, I’m not surprised. They do make a point. They are a freeware dev, so they clearly it wouldn’t make any sense to go through all the extra trouble without any monetary gain. I’ll happily continue to wait for Aerosoft and their CRJ.

So now I can fly with Arrow again.

If it happens this week, normal time is approximately 9 hours from now.

Bwahahaha. Did I not call it! We can now be the owner of the lovely A4 Skyhawk!

People need to vote with their wallets, and not buy anything through it until things change. I hate to say that, because there are some good things on there. But sometimes you have to do these things, unpalatable as they are.

I’ll be refraining from purchasing anything until they listen to feedback from customers.

I hope that someone with some sort of authority on these forums can feed this back to Asobo/Microsoft, if it’s not been done already. This needs to stop, and quickly.

Reply to the dev blog update that just came out. It might be the best chance

Lol, they don’t care - it is obvious they don’t want anything in the marketplace that makes their default aircraft which they won’t update look bad… this is why they keep throwing hot garbage on there.

It’s a very strange tactic. They wanted to open up the sim to a new audience via Xbox. They’ve done that, but now risk alienating a lot of them (myself included) with their ham-fisted, blasé approach to their own store.

Can you see that comparing how much we’ve paid isn’t helping anything? The PC Master Race thing is a meme only. Most PC users don’t think this way thank god but there is a minority who really act like they are so superior because they’ve remortgaged their house for a computer. Nobody forces you to do anything and that means opening wallets to. Spending more money realistically on something really doesn’t garrauntee it’s quality. For e.g. Buying a Million dollar house only to discover termites in the walls as well as the neighborhood is actually garbage, also the people in it. Deep down we know these truths but some are too arrogant, too elitist and classist in mentality that only look to stoke fires rather than help put them out. That’s why I said “throwing blame in all the wrong places”.

Where are all the updates to the existing airports??

Why did they release the A4 skyjunk but not the awesome T-45 Goshawk? So odd.

What a disappointing marketplace update again. I really get excited every week for new airplanes and since weeks the updates are just frustrating and disappointing. What’s with the Seneca? They announced it to be released weeks ago for the coming days. That’s just false advertisement and people find excuses for it. There is no statement, no update and no response from them. What a weak performance, I really start to regret buying this product on Xbox.