Complex add-ons always cause a noticeable fps drop. There’s nothing Asobo or the developer can fix.

Yes, but all it updates is the fuel. Someone on their support forums just told me to set it in the sim first before loading in, so I did. Then set the fuel with the EFB once I got in. The weights matched up, the CG did not at all. The sim said the final CG was like 20% but the EFB had 17. If you click the “set” button again the EFB will randomly change to a new CG value occasionally and STILL not match the what the sim’s fuel window shows (yes the slider is set to full right 35%)

I am referring to the performance issue introduced with SU 3
https://forums.flightsimulator.com/t/performance-degradation-with-1-14-5-0-upgrade/
With that fixed, I hope to see an improvement of frame rates

So I heard back from Aerosoft. They told me it is normal for the pax/cargo to not change in the sim’s Fuel window, just the fuel value. I suspect they are doing some kind of voodo behind the scenes because I also noticed if you use the EFB to set the fuel/etc in the sim then open the sim’s Fuel window and start modifying the cargo values to match weights up, the fuel sliders jump back to their default 50%

There are always possibilitys to make programs run faster by optimalisation of the program code.
So don’t say that the great fps drop is acceptable.

So complex add-ons like e.g. PMDG or FSLabs aircraft are running without a significant loss of performance?

Yes, a little bit that’s normal.
But 25% to 30% is unacceptable.
It make MSFS almost unplayable.
When the developers optimize there program code then the drop of fps is less.

Noticed the CG issue, too, during the tutorial flight and after. I think after clicking 3 or 4 times, it sticks to the last CG (which at least in the tutorial then matched what was expected)… did not notice the issue with passengers/baggage so far and will take a closer look the next flight.

My flights were ok so far. But the autopilot behavior … not sure if it is my fault but it takes some rather strange nose dives or climb rates from time to time and in those moments seems to be as broken as all other autopilots… but it could also be an issue with the trim settings - so I will keep an eye on that.

I will also check the reverse thrust topic as it did not work even with my assigned axis (and arming the RT of course).

Besides, it feels just good to have a plane with a more than average level of details.
First time in MSFS that I spent almost the entire flight within the cockpit, looking, learning, adjusting, reading, monitoring etc. without the time to enjoy the scenary outside.

Might make sense. I can at least see that all passenger/cargo data is transfered to FMS and the FMS calculates with same weights etc. Never came to the idea so far to also double check it in the sims menu, as my understanding from the manual also was that that´s actually the purpose of the EFB…

How’s my experience? FWIW I went to bed at 2:30am after trying it out on launch night.
I can see this rapidly becoming my fave aircraft to fly in the sim (Apart from the PMP321). It’s absolutely superb (well on my rig) FPS wise (esp for such a detailed cockpit) though I took no chances and set the cockpit refresh rate as LOW. Bit miffed as to why the FMC is blank when you start, despite loading & planning a route in the sim. Would also be nice to be given the option to import direct from Simbrief Like I can with the CJ4. Just need to practice flying with the CRJ as the systems are very different and take a bit of getting used to, but initial feelings are that it was well worth the wait and spending the £40 odd qwid. #happy

I’ve made two more or less successful flights: KPDX to KSFO down the US west coast in the CRJ 700, and KSNA to KSLC going inland from the coast into the mountain states in the CRJ 550.

In both cases I started at the runway to “cheat” while I’m digesting the manuals for startup procedure (not my favorite part personally, that’s fine! I know a lot of people really enjoy the procedure parts too), and I input my flight plan to the FMS manually which wasn’t too hard.

On the flight to San Francisco I had a problem with cabin pressure. I haven’t fully figured out what happened, and if it was a bug or if I hit a control by mistake and failed to correct it, but with help from other forum posters I’ve identified the parts of the manual (the tutorial) that actually mention the cabin pressure and bleed controls in detail, and I’ll keep a closer eye on them in the future.

On the flight to Salt Lake City I had no cabin pressure problems; cabin altitude maxed out at 8200’ at FL410 which sounds about right for the ceiling.

I initially had some troubles with the autopilot on climb, but this seems to have been user error with throttle management – keeping a closer eye on my throttle got things going smoothly, and I’m starting to prefer the “speed” (IAS/FLC) mode for climb/descent versus “VS” mode because it’s harder to put yourself in a position where you slowly lose speed over a climb, then realize you’re about to stall.

On both flights I had some issues with the glide scope not following all the way down on an ILS landing, which could be due to bad throttle management on my part messing up the descent, or else some other failure on my part; I’ll be double-checking the documentation and tutorials. I was able to successfully land, but didn’t follow proper procedure (should go around and try it again instead of landing farther down the runway!)

All in all I’m really enjoying this aircraft; the CRJ 700 has an Alaska/SkyWest livery which makes me happy as a Pacific Northwest resident, and it’s fun to fly something in between the Cessna Citations and the Airbus & Boeings!

Passing San Francisco on the way to my approach vector: 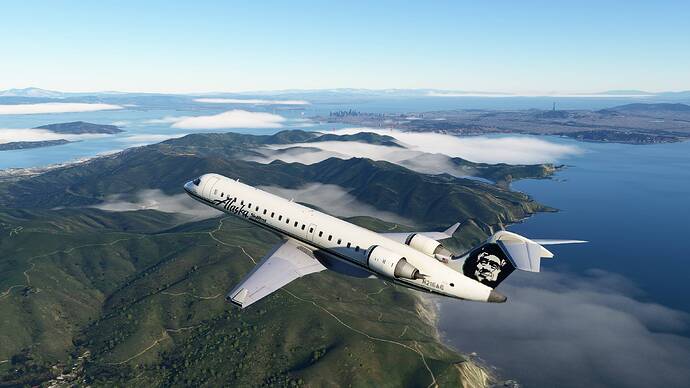 Rolling in towards Salt Lake City: 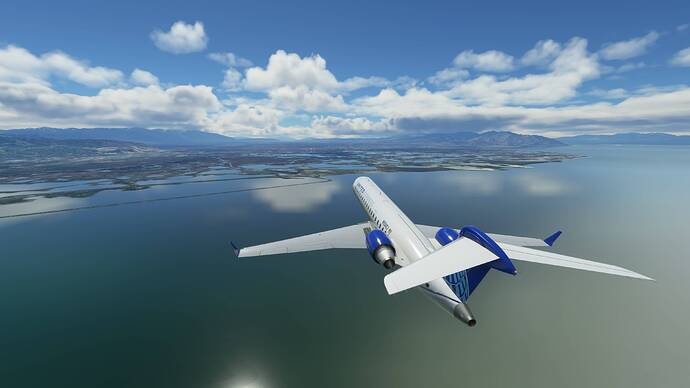 Aerosoft was specifically asked about VR and they said they would not recommend VR use of the CRJ at this time. For many people it’s working fine, or at least good enough, but Aerosoft has publicly stated that this is not yet recommended in their eyes, as a VR plane. It’s unfortunate you’re not getting the VR experience you’d like, but this information was available.

Rather than “cheat” by starting on the runway, you could always start on the ramp and select the ‘Ready to taxi’ state from the aircraft tab of the EFB. That’ll start it up for you and you’ll be able to program the flight plan and be ready to go in no time.

As the EFB is battery-powered, all you’ll need to do is click on the screen, select the aircraft tab and select the ‘Ready to taxi’ state, at the right side of the screen.

Nice – yeah I’d noticed the presets in the tablet, which should help me “jump-start” going from the ramp as well.

For the third flight!

Yeah performance is good in vr, visuals are ok, its just I can’t read instruments without getting very close to them.

Preliminar quick reflection: The product is amazing because I’m starting to hate the plane just as in real life.

I will expand as I do further tests now I can’t write properly because the cockpit is too cramped.

There is a bug list on Avsim with about 12 bugs at least on it. Don’t think it is ready for prime time yet.

The problem is your headset. If you upgrade to the Reverb G2 things will look a lot clearer.

There is a bug list on Avsim with about 12 bugs at least on it. Don’t think it is ready for prime time yet.

Do you mean this one??

1. FADEC completely broken, thrust just reverts to whatever the sim thinks is full power in the climb, toga, and mct detents. It completely overshoots the target N1. Currently not possible to have realistic climb and takeoff performance

2. Airplane lifts off the runway before VR by itself

4. Spoilers move even without hydraulic pressure.

7. Engines sluggish to respond to throttle input even at higher N1

9. Engines too loud at cruise

Other than that, its a really nice plane with a lot of potential once they iron out these bugs.

Someone might say: “Bit like reading the first report of a beta tester on this aircraft. In a case where beta tester are not silenced by an upheld NDA”