How to start at gate without another plane overlaying into mine?

Can someone for the love of God please tell me how I can start at an airport gate without some other plane being overlayed either on top of or right to the side of my plane? I’m practicing cold & dark and no joke 95% of the time there’s a cgi plane either right where my plane is or off to the side and graphically bleeding into my plane. It’s maddening. I’ve chosen gates that show no plane on the map and still I get this. How can I guarantee avoiding this nuisance?

Maybe you have AI Traffic turned up way too high and it’s filling your airport with planes? Check those settings in the menu (I forget where) and see if you have them set very high.

Hello,
There is a new area of the forums for asking the community for help called Community Support. I moved your post there.

Even with airport parked planes set to 20% traffic I’m still getting this. Look at this cr@p! Is this just a Honolulu airport thing? 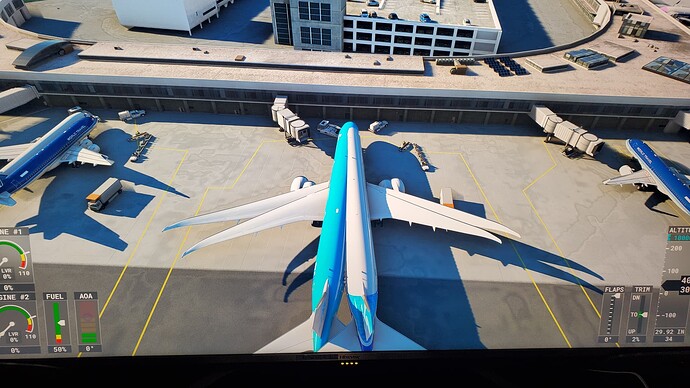 This is with Ground Aircraft Density set to ZERO: 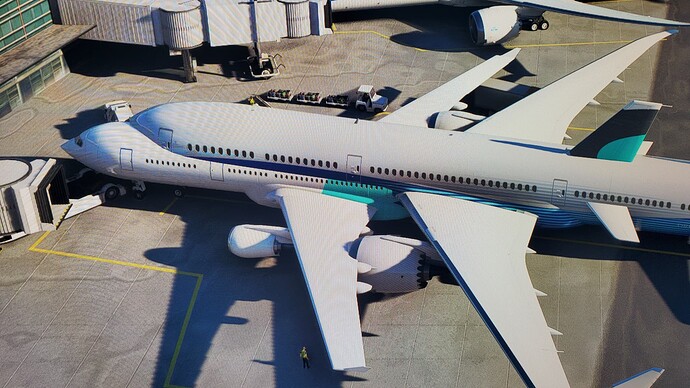 I give up, I am so God ■■■■■■ frustrated right now. Not to mention, what happened to the framerates since SU9? It’s a low frame rate stuttery choppy mess right now. I had one wonderful smooth slight since the SU9 update. Since then it’s a choppy frame mess. I thought at first SU9 improved performance but not now… now it seems worse than before.

Looks like the evolution of the Airbus Beluga … now with four wings and a weird canard towards the rear empannage.

Lmao! Yeah I think it’s a Honolulu airport issue in the sim. I just spawned at JFK with no problem. Sometimes this sim drives me to drink… really can make you insane when you simply want to sit down and practice cold & dark and can’t cause you can’t get an overlaid plane out of your own! Maybe it’s plane mating season in MSFS.

Framerates also way better at JFK. Maybe it has something to do with my Honolulu area mod. Wasn’t an issue before SU9 though, but it’s probably related to the mod I’m guessing. Way better performance and no issues so far at JFK with aircraft overlay.

So, for now I’m gonna chalk it up to being a mod issue.

There’s a solution provided by this free add on, available from flightsim.to to just move the spawned aircraft to another gate pretty easily. ✓ Adjust position - Save Locations - Broadcast to ForeFlight/SkyDemon/MDFlight garmin watch app is a Microsoft Flight Simulator 2020 mod created by themoonline. Download for free to enhance your experience in MSFS 2020.

“What are you doing, step-airplane? I’m stuck”

Maybe it has something to do with my Honolulu area mod.

I had the same problem with an AI Traffic addon I was using on Xbox. Ended up have to remove it. It was a nice addon…lots of planes that I didn’t own in the package, but it was ridiculous the number of times that sort or thing happened.

So yeah, it appears the issue was caused by the Honolulu add-on I had installed. It’s really large, like 24gb. I removed it and went back to the just Waikiki area mod that I had prior that is only like 560mb and spawned at the airport in a couple of spots with no issues. I was looking at the reviews and someone else mentioned also removing the parked planes so it seems it was the mod at fault. Also tested with the new PMDG 737 which is beautiful. Seems the mod was the cause. Even framerates are back to normal now.

I marked your post as solution as your issue seems solved.