Yesterday I was in shock! I launched FS2020 and when it checked for updates I was confronted with a 65GB update, take it or leave it. 65GB? Yes, 65GB!

No option to decline or defer as in other software, simply update or get locked out of FS2020. 65GB far exceeds my monthly data allowance so I had to rush to my local Vodafone store to get heaps of extra gigabytes.

I commenced the update. It took many hours to download and completed in the middle of the night when I was asleep. I was worried that a momentary glitch in the download from my service provider could create havoc. Luckily all went well.

With the download underway I looked at the long list of updates. Most were incomprehensible but I did note that many updates were to tweak performance issues in aircraft that I have never flown and am unlike to. I thought, “I don’t need this, there must be a better way”.

A better way would be to offer aircraft updates only when those particular ones are selected at the main menu. Also, instead of accumulating a huge updates download it should come in “bite-sized chunks” so as not to overwhelm bandwidth restrictions and don’t make it immediately compulsory either.

And why don’t they program printing of Nav Logs as in FSX? Many people want it.

As discussed with every update, the sim is similar to an MMORPG and as such all players must have the same version.

You obviously have missed the past FEW updates as this last one was a 1gig core installer update and then a 6.5 gig update. Staying current on the version will help you avoid having to download multiple updates at once.

Furthermore, with this update they optimized the full install to be 85 gigs vs the 173 or so it was previously. Not sure what you all downloaded.

The update was 4 to 5GB or so. The 65gb is a full additional installation of the game. Did you check manually that the path of the installation was correct? It appears in some cases the path is not recognized and if you do not set it manually, you will get another full install of the sim.

Sounds like a you issue. My update was only 4 gigs for the standard version.

And why don’t they program printing of Nav Logs as in FSX? Many people want it.

You can in a roundabout way. I took a screenshot of a Nav log, and posted this into MS OneNote. An online process does some form of OCR, and you get the option of copying the text from the image. 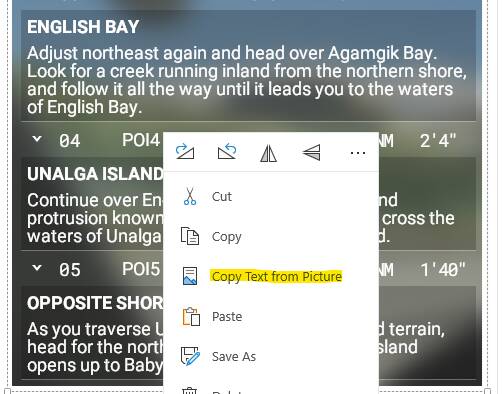 It’s not perfect by any means, but it works.

I had to rush to my local Vodafone store to get heaps of extra gigabytes.

@MilordKen Wait, wut??? You’re using your cell phone as an ISP? If that’s accurate, you need to get a real ISP. I can’t speak to why your update was so big, mine was not, but trying to use a phone as an ISP replacement just won’t work. THAT is the “better way” that you spoke of.

And if I misunderstood, and you actually do have an ISP, then trying to figure out why in the world you download was so big would be the next step.

But as for the updates in general, I’ve got nuttin. You’re just gonna have to get used to it, because it’s only going to continue, and even get worse over time. And I’m talking about way more things than just MSFS. That’s the way the whole industry is going. At least MS/Asobo are actually doing updates, instead of just shipping their product and calling it good and moving on to the next thing, like too many developers do.

OP,
Sounds like you did not keep MSFS up to date for months, installed packages to the wrong location, etc.
The recent update size was barely a 1/10th of what you are ranting about.

Ditto, and only took about 15 mins to download and install.

@MilordKen if you don’t already, probably a good idea to keep an eye on the forum for notice of updates - the weekly dev blog will give you plenty of warning…

Before MSFS was released, you almost had to anticipate the size of this sim. SO, I bought an M2 hard drive of 1 TB and dedicated it to MSFS. Also have one for P3d. Now, no problems. I know cost can be an issue, but you have to pay to play…especially in these days of sophisticated software.

In reply to KevyKevTPA I have a wireless broadband only service with Vodafone. For cell phone I use a different provider.

When I launch FS2020 it gets to a screen titled “Searching for Updates”. Mostly nothing is found and initiation proceeds normally. If that is the case how am I to know if I have missed anything?
Where can I find the devblog warnings?
How do I check the path of the installation?

The development road map is published here with confirmation of world and sim updates and release dates.

Check here for major announcements from the MSFS Team.

Or, my favorite phrase: Problem is between computer and chair.

This last update was maximum 8 gigs if that. You either screwed something up royally or haven’t turned it on in months.