I can´t be the only one?

So, came back from vacation today, downloaded and installed the latest updates for the sim and in the content manager.

Restarted the game, switched from ultra to low and back to ultra, in case something went wrong with the settings.

Quit the game, opened up the usercfg and disabled film grain, sharpen and color grading. Back in the sim (really nice suprise to see the loading times so much quicker btw) and it looks just as awesome as always.

I can´t tell any difference to prior versions.

Of course, I did empty my community folder and didnt install any mods yet, not so short after an update.

But am I the only one, where this thing just works from day 1 ??? how

Not just you… a good number of users are enjoying both the PC and Xbox version after the update. The flip side of that is that many users are having major issues.

No, you are not the only one. Some may try to gaslight you by telling you that you “just don’t notice the degradation” and invalidate your lived experience, though.

It’s not gaslighting when it can be actually quantified, but certainly people who don’t mind some degradation should 100% be happy and not go looking for it, either. I also have very few complaints, mind you. But the degradation is there. Is it a deal breaker? No way. But I’m glad folks are pointing it out so that Asobo can fix it.

I love it. Graphics look great to me. Performance is solid. I don’t see any of the pop ins people are talking about, only if I look for it and it’s a split second. Just dealing with the altitude bug but sure that will be fixed soon. So no, you are not alone. I would feel for the ones having problems but after all the negative comments, I don’t anymore, haha.

While I do notice the way they do the rendering now, (objects pop in when they came into view). While they’re kind of annoying, if this is the way they need to do it to reduce the CPU and GPU load that brings me the smooth and stable 30 FPS even on everything ultra, then it’s a price I’m willing to pay. Before, I’m getting 25-ish even on Medium-High setting, so that’s more annoying to me.

Not to say it’s problem free. I can still see some impacts the new rendering method affects the other parts of the sim, like the LOD handling can make custom jetways and objects disappear as soon as you are sitting at a specific distance.

But to me these are specific annoyances that I can live with for now as long as they’ve communicated these new changes to the third-party developers so they can go ahead and update their contents to avoid these problems.

But I might be bias about this though. I don’t fly GA or doing sightseeing VFR flights. I only fly IFR and only on Airbuses so I’m never really bothered with visuals that much, as long as I can fly smoothly which helps my landing timing.

The first thing I noticed with the new update is smooth FPS and the stutters are now gone.

Exactly. And not one CTD event.

The “pop-in” problem can be fixed with an edit to the UserCfg.opt file if you’re comfortable with such things.

The butter smooth, stable performance is what I’ve been waiting for… and it is here. The graphics are an order of magnitude better than anything prior to MSFS, even if things aren’t as perfect as they were a year ago. It’s a balancing act.

I’m pretty happy with how this update turned out.

Would you mine sharing your user config LOD setting? I have been experimenting with higher LOD’s but have taxi way signs popping in

I had the taxiway signs popping too (really noticeable at night!) and it seems that’s been fixed, though I haven’t done a night flight to (easily) check that yet.

More and more there are posts like this one that go into great detail.

As always, keep an unmodified back up of the original file(s) just in case…

…when it can be actually quantified

That’s the important part. In my case, it cannot be quantified.

Thanks…yeah I have a copy of the original. The night flights it is where I noticed it.

Well, MS made a ton of changes to FS2020 with SU5, and I have to say, from the ones I can see they weren’t for the better.

1). My screen is full of players that I can’t turn off from the World screen. Ugh. Is there a way to do this, or is this a temporary, unintended consequence of not enough regression testing?

2). The little 3 line pilot assist screen that I kept under my compass on the left is now this huge massive screen with extra stuff now I don’t use. Two AP options are there, but the size of the screen takes up way to much. I know I can move to another screen, but that’s not the point. I love to fly in 3rd person(chase mode), and smaller assist screens worked perfect, Why do they go and continue to ruin UI aspects that were working fine!

3). The clouds, the clouds….something is seriously wrong with the texture of the clouds. They are not realistic at all. I hope there’s a plan to redo how the clouds are generated. Soon.

I’m genuinely happy there are some users that are happy with the way things look at the moment, but the fact is we’ve already seen quite a lot of material posted across several threads supporting assertions of the reduction in quality in SU5. If you have some evidence to the contrary to support your implication that people are imagining things (which is ironically what you seem to be accusing others of doing), then I would encourage you to post it. Otherwise your words don’t hold an awful lot of weight.

We have all noticed the 500 negative and angry repetitive posts following the very recent 1.18.14.0 update and hotfix. And we can all concur it works great for countless users and terrible for many others. Can we at least give the developers a bit of time to come up for air and begin to address and resolve issues before we see 500 more negative posts on the same thing.

I was on the graphics degradation train upto last night when I did some more looking into it.
I think it’s purely a server load issue, as I did a flight last night from EVRA - UUEE and had zero issues apart from about 5 mins where there was a bit of pop in and the ground textures went blurry in the distance then came back instantly, this was reflected with a change in bandwidth the sim was using, so I’m guessing the servers are just getting absolutely smashed and can’t keep up, and this is reflected by person to person depending on what server they are on, that’s my guess anyway, one thing I will add for people to try is the change the LOD setting in the user.cfg to 3 that does make a massive difference to the pop in you “notice”, doesn’t stop the pop in just makes it less noticeable because it’s further away if that makes sense…

I never stated or implied such.

If it seems that way to you then you are reading far more into what I say than what is there, or intended to be there.

Otherwise your words don’t hold an awful lot of weight.

I’m only stating what I personally am experiencing. 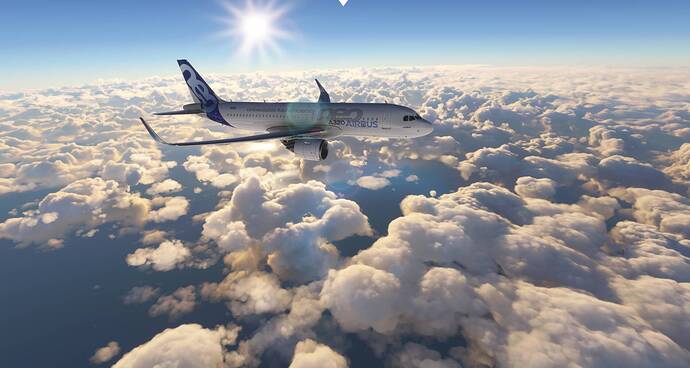 Just over the English Channel heading to Nantes France