I can´t be the only one?

Just flew into KLAX with FBWA320, graphics on Hi and clouds on Ultra, LOD 3.0 and 2.0 changed in CFG. For the very first time not a single stutter with fps around 35 until touchdown when flying into KLAX. (Usually stutter fest with fps dropping below 15 with the same settings and LOD to 1.0)
Specs: I7-9700K, 32gb ram, Ti1080, in 4K. Photogrammetry looked very nice, only 7gb ram usage.
To be honest, I don’t know how they did this. The way I see is that they have optimized the sim with a lot of room forward if it can look that nice and use only so little resources. (The next XBOX has probably more ram!). 4K seems to be a must too if the sim is supposed to look nice.
But again a big mystery why about half of us have a worse experience.

Great post! Sounds like you are onto something with the LOD fix before the developers fix things.

After a rocky start, mostly CTD’s that have thankfully been resolved by the hotfix, what I now find is mostly annoyances and bugs.

Sim looks ok after some tweaking - especially re. colors and LOD. The latter has changed a lot and needs some tuning on Asobo’s part I guess.

Performance has certainly improved, I use it locked at 30 fps and didn’t have issues pre-update, but I have to admit that flying with the CPU at 20-30% and the 3070 at 40-45% is nice, cool (temperature-wise) and maybe even eco-friendly. Also, headroom is never a bad thing.

There are a couple of graphic issues bothering me however, those fall in the categories that have already been noted all over the place, and VR is problematic on this end while it was clear and smooth before the update. Hope those will get fixed sooner rather than later.

That aside, I think Asobo did an incredible job in bringing MSFS to Xbox and the performance upgrade is not small, now Microsoft needs to tune content delivery and streaming.

Do I like what happened with the control scheme? Not with legacy, that should have been left untouched: now if I use my right mouse button to look around I can’t use the throttle at the same time, also setting the baro by hand on traditional alt gauges (IMHO, blurrier than they were) sometimes is a pain.
The new control scheme on the other hand makes sense, I just find it to be too much ‘in your face’ but didn’t play too much with it yet.

It’s nice most of the time, but even with adjusted 4.0 or 3.0 CFG LOD, i get pop ins. Draw distance is kinda better… i literally had autogen buildings fading out and fading back in on final, when 500m from runway in Phuket, this ruined so much of the immersion.

Side note: Anyone know of any scenery add-ons for Phuket? - that approach deserves a add on airport / area surrounding it.

I picked this location simply because it is the only full 4k screenshot I have from early days to compare, also an area that’s had no scenery update. Approach to La Paz at dusk. Plenty of autogen scenery (note that in the latest version, I also have Bijan’s excellent seasons pack installed … hence the additional trees. Forgot to remove before doing the comparison). Settings - full 4K, mix High/Ultra, LOD 200. 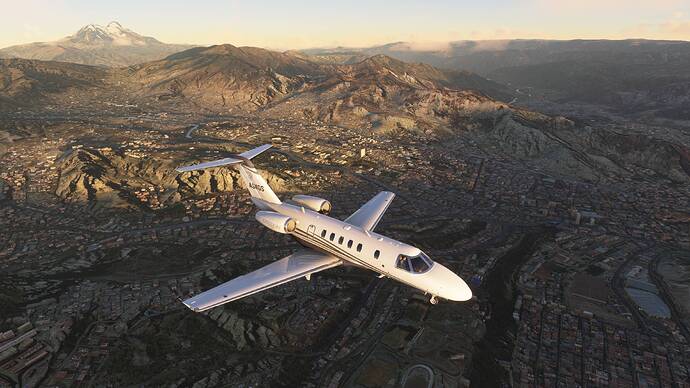 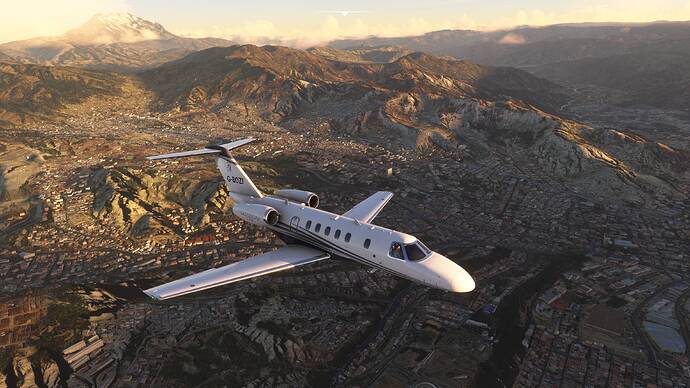 I can only assume that the degradation people are frustrated by depends on what and where we’re flying (and I suspect the periodic load on the servers too) since a lot of folks are clearly disappointed with what they’re seeing. The above images represent my experience of the graphical quality thus far…no difference. There have been some big changes and tuning in the application, and obviously some compromises made. But I don’t believe there has been a universal downgrade to the graphics as has been widely asserted.

The only big difference was that v1.18 was running at a steady 45fps +/- a few; v1.6 was right around 30fps. Just for kicks and giggles, I cranked everything up to ultra … still right around 40fps in this example. the ONLY thing that tanked the performance was clouds … added storms preset and I was immediately dropped to 25-28fps.

I hope this headroom allows Asobo to provide us with some additional (extended) graphical settings. I will need those when I upgrade to my 3080Ti

You are not the only one, it works for me, without ctd’s, but i noticed the graphical downgrades as well.
The freezing controls if i move the mouse, the malfunctioning altimeter and the crazy weather are the biggest issues since the update for me personally.

I have been relatively lucky this time because i dont care that much about LOD and had no CTD, but i understand the frustrations pepole have, and i would rather downgrade to SU4 as well mostly because stuff like the altimeter bug and the controls.

Its a shame you can see the downgraded clouds though, apart from that its a great shot

Had 2 amazing VR flights in the MB-339 and the F-15 and they were the smoothest I’ve ever had, so I’m more than happy with the update and hotfix…
Although i’m not dismissing others who have different opinions, just saying how it is my end now

The problem is if you’d rotate your camera, a lot of scenery wouldn’t be there at all, and quickly “pop-up” afterwards. They did not reduce the quality of the scenery that IS already displayed.
Also you have no clearly visible clouds in the screen to compare.

That’s a really interesting observation. Would be good to raise this as a Q and A topic. The good thing is that it should be easily answered as they will have access to detailed stats on this.

Truthfully - I’ve seen very little popup scenery. Some - yes - but not a whole lot. Downtown LA did to some extent (I think these areas with tall skylines are probably the most obvious). Interestingly, also saw a little over the countryside in Brazil where there wasn’t much to look at except rolling hills, but none of it was a really big deal for me at least. In the shot above, I was panning around the aircraft and saw no popup scenery whatsoever in this location.

Clouds on the other hand … that’s a whole other saga. The clouds are nothing like the way they were at launch, but that’s not a SU5 thing - it’s been continuously evolving since the start. You probably remember the angry threads because those were the only clouds we had back then. About SU3, they were ‘downgraded’ if you like, but we got more diversity and the appearance of stratus type cloud layers too. So we have less fidelity, but more variety now. I just hope Asobo can eventually figure out how to give us both. And some cirrus please!

SU5 was fantastic for me.

This seems to be a tale of two updates. I am deeply sympathetic to the naysayers. I went from have 2+ CTDs PER DAY to having had only a single CTD since the release. I remember what the constant CTD was like.

It would be helpful for the SU5 “for” and “against” crowd to stop using hyperbole and to recognize that our experience, even when reinforced through a confirmation bias echo chamber of like-minded people, may not be others’ experience.

It’s more helpful to provide explanatory information so that Asobo can do some root cause analysis and tease out why there are these two groups so that everyone can have a great experience in the future.

I just wanna be able to do a flight without CTD

I feel that, I’m sorry that’s happening to you and hope it gets sorted soon. I had CTD for the first 18 days after release and had to reinstall Windows. It was awful, so I’ll always sympathize with being unable to fly.

How can you when there is no error message. No logs or anything. The sim abruptly closes. Not even a BSOD!! A Microsoft software working inefficiently on a Microsoft platform. This is just like Forza horizon 4. Constant BSOD to this date. Maybe it’s just me but I don’t think Microsoft should develop anything but their OS cause I don’t have any other software besides the aforementioned that are this unstable.

Yep, this is exactly how I felt when I had this problem. They record seemingly nothing about the crash and made me go on a safari looking for nonexistent causes. They only knew what I told them. They never solved it, the idea to reinstall Windows was purely my own so I’ll never know what caused it either.

No you are not, I took similar steps and made sure to read the patch notes, have had no issues and the sim for me is more stable then it’s ever been with a nice 40% performance boost.

All tests were made with the default A32N.

Before the update I was on High-end settings with 35-45 fps in Manhattan with live players.

After SU5, I’m on full ultra settings with Terrain LOD AND Objects LOD at 3 and fine grain film to 0 in UserCfg and all sliders to 200 in-game, 30-40 fps on the ground in KJFK and 40-50 fps over downtown Manhattan with live players on.
TrackIr becomes a little bit stuttery when you move your head fast at 30-35 fps but otherwise it’s smooth.

FPS display in the SDK mode says Limited by Mainthread PC, my GPU usage is at 99% with Max 5gb of ram usage. In the Nvidia game overlay my cpu runs at 30-40%.

What made the biggest difference after SU5 to get the graphics back to almost where they were before the update was to change the terrain LOD and Objects LOD in the Usercfg and setting everything to Ultra in-game. I tried LOD 5 in usercfg but FPS were way too low, like 20-25 fps in KJFK.

I have a few CTD but never in flight, always when I push Fly and it’s only when I first start the game after booting the pc, if I keep the pc on all the time and run the game, close it and go back in, no CTDS.

No, you are not the only one. Some may try to gaslight you by telling you that you “just don’t notice the degradation” and invalidate your lived experience, though.

As it would happen, we were not gaslighting. Regarding Your Feedback + Upcoming Hotfix - Community / News and Announcements - Microsoft Flight Simulator Forums

I think what it comes down to is some people having used lower settings in the past, I think it’s the only way some folks didn’t notice the degradation. I’m glad it’s all getting sorted now though!

In fairness, you’re starting AFTER a hotfix and you have no mods in community folder, so of course you’re going to have less CTDs than many of us who started day 1.