I cant play because of bumps on the runway?

The game has become unplayable for me because when I land about 80% of the time my plane will hit what seems to be invisible creases in the runways. It seems to happen nearly everywhere and it sends my plane flipping into the air. Also ive been hitting these speed bump creases on takeoff sometimes but not as often as landing , say maybe 10% . The game was running beautifully before the latest patches for me . After the patch I’ve had nothing but problems , but this is the one that makes it not playable. Other problems I have noticed include :
low wind speeds that feel like taking off or landing in a hurricane .
Horrible looking trees everywhere that look like buildings ?
water looking terrible
LOD problems jagged low texture things
Just after loading screen , my plane will start bouncing up and down randomly

I’ve not seen runways like this, but I’ve seen quite a few taxiways, and ramps just as you describe.

I’ve noticed this on KBFI 32L as well as KSEA 34L. It looks like jagged lines pop up while the runway is loading and causes bumps. Glad I’m not the only one experiencing this. Didn’t have this prior to the patch.

So, All in all… Not that bad. There are plenty more!

I believe many airports were automatically generated without having hands laid upon. Probably because there’s just too many.

Imo, best thing you could to file a bug report over at MSFS’ Zendesk so that there is a chance to have it fixed. There might also be improvements from the better world scans we can expect in the future.

That’s what happens without flatten.bgl or what was it called again? It used to make entire airports and runways completely flat in FSX. I think we don’t want that back, the devs don’t have scanning data of airport aprons for every square inch i guess so the engine connects the elevation data it has which leads to these results.

I posted about this in the Airports forum and made a Zendesk report as well.

The other day I was landing on runway 2R at KBNA and as I was rolling out and under 55 knots, my 787 hit one of those “earthquake fissures”, flipped nose-up into the air and my flight failed with “You have damaged your landing gear.” I later rolled that entire runway with a low-speed taxi up and down its length in a C172. I could see these “cracks” way up the runway length but by the time I got to that spot on the runway, it was gone. So it appears that these cracks or discontinuities are rendering errors when the game is reading terrain elevation data too quickly, perhaps, or skipping some kind of interpolation step that should create a smooth surface, so instead we get these “cracks” in the runway.

My Zendesk report is marked “Solved” right now, along with one other bug I posted at the same time about cockpit clicks not be registered sometimes. Another bug I posted (about the 787 autopilot choking on landings) is still marked Open. Hopefully that means the runway bug will be fixed in the next update, or perhaps the next World Update.

I know that when the favourite airport has issues it’s a bummer, my local airport isn’t that great either. BUT… A game where all the world is reproduced become “UNPLAYABLE” cause 2 of airports? Sounds a bit exaggerated

This error appears already since the 2nd patch. As already noted, it seems to be a render error of the runway.

I’ve had this on EDDC and on EDDP. Did not fly much last week but I guess its not just two airports.

Oof, EDDP is a mean one (the spot where you have to cross the highway).

I think a procedural 50% flatten on every runway, taxiway, ramp and road would make a huge difference.

I don’t miss the totally flat airports of P3D/FSX at all, but almost all the default airports could use a smoothing out…

I’ve experienced this issue on taxiways, but not runways. The worse was at Charles de Gaulle on the route to the GA parking. I was cruising along the taxiway towards the GA parking at 18 kts and hitting many of these invisible bumps. Then I hit what was apparently a big one and was presented a black screen telling me I crashed.

Same as others have said, I’ve had taxiways with bumps, a few pretty nasty, but never a runway. I’m working on the “World Traveler” achievement, and I think I’m up to about 80 airports so far and I don’t recall having any issues with bumps. Not yet at least. About 95% of those were in the US, in case that makes a difference.

but just in general - even a “not smooth but not too bumpy” runway still seems more exaggerated than IRL.

This is a landing I attempted the other day at KBNA (Nashville, TN USA). You can see several of these “cracks” on the runway surface. I touched down, rolled over the first one, hit the next one which slewed the airplane around, then hit a third one which tossed the plane right back into the sky! Before I cut the recording, you can see a few more of these rendering cracks further down the runway. 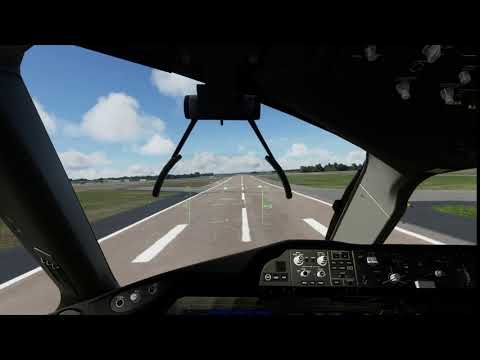 Yep, exactly. Nice video proof. Hopefully the developers have found a fix for this. I saw in another post a Zendesk report showed “Solved” for this issue. Hoping for a patch sooner than next month.

KGSO, KRNO, KLGA all have the same runway “creases”… Just when you think you’re coming in for the perfect ILS landing, upon touchdown there are elevation cracks running across the runway and your plane starts doing cartwheels when it goes over them.

I was landing the TBM at KSAN (the upgraded scenery from Marketplace). Butter landing and then, out of nowhere, it was like I hit a huge invisible ramp. TBM pitched up wildly (actually heard a tailstrike) and I landed HARD. Very frustrating. But this is the only instance where I saw it. I figured it had to do with the modded scenery. Tried replicating on a second landing but the problem did not recur.

Been happening a lot today for me in several airports - like invisible speed bumps and then crash. Latest one is Alameda NAS (NGZ) runway 31.