I’m trying to do the JFK landing challenge. In the air, I get 25 fps. Close to the ground I get 14 fps. This poor performance doesn’t even change when I lower settings one by one like shadows, terrain, etc.

My system really sucks and I understand NYC to be such a demanding city in this simulator. I even tried a myriad of “fixes” from videos I watched on Youtube (download Process Lasso, disable game mode, run simulator as admin, lower volumetric settings, stand on your head and clap your hands…blah blah BLAH!)

It’s not my system because I score fantastically in benchmarks and other games are smooth as butter. I reinstalled FS2020. I have updated Nvidia drivers (even used DDU for a super clean install). I have done everything I possibly could to get better peformance.

Yes, I have everything set to ultra at 4K HDR. That’s because I spent a lot of money on my computer and 4K, HDR 144MHz monitor. I don’t want to lower my settings (even though I already tried and got negligible results). 1080, 1440p, lower render scaling makes the picture look like ■■■■ and maybe I get 35fps.

Either I’m dumb and don’t know how to optimize my system or this game is BROKE!

And fix the antialiasing and clouds. After one of these updates, distance objects and landscapes look jaggy as hell and for some reason the clouds look crappier.

“You can also pretty much forget about 60 fps at maxed-out settings on today’s hardware.” - Tom’s Hardware

Honestly, I guess you are the biblical saying: “Blessed is the man who covets what he already has.”

I’ll happily swap my poster child of Minimum Requirements rig for yours. I do get an up-and-down 25-30 fps at Newark and JFK at Low with some Medium. Seriously. Let me know.

But if you’re not up for that swap, you might want to turn everything to Low, save a flight that will hammer the system aside from a Landing Challenge. Try flying down the middle of Fremont St in Vegas. Seriously. Baseline your numbers from there and start turning up stuff.

And remember, my offer always stands.

Doesn’t matter how beastly your computer is. You won’t get 60 fps on today’s hardware. The meme used to be “but will it run Crysis?”. Now it’s “But will it run MSFS?”. It took nearly a decade for hardware to catch up to Crysis. Will likely take several generations of CPU and GPUs before hardware catches up to MSFS as well.

That said, 25 fps seems rather low still for that hardware. You aren’t running render scale beyond 100 by any chance, are you?

OP, as mentioned before, you are NOT running render scale over 100, right??

Nope. I even tried running at like 80 but it look like ■■■■ and didn’t do much better. The word xxxx is censored? Yep

Can you post a screenshot of the dev mode fps counter during normal flight and another when youre getting the 14fps. Everyone is guessing at things until we can actually see what the sim is saying the problem is and start working from there.

Any way. I do get usable performance but the game still stutters on the latest patch. I also only get about 30-50 FPS in cities, depending on which direction I’m looking and what plane I’m flying.

The biggest FPS booster I can find after hours of testing and thousands of dollars?

Turn OFF AI traffic and Online Traffic, and reduce to 25 or lower the airport people, traffic, and vehicles.

Basically disable anything that is cpu heavy.

You will see your cpu limit vanish and FPS switch to reflect whatever graphics setting you have set.

Is it slightly Langolers like flying into an airport with no activity? Yes.

But this is the only way I can land a plan at JFK or Ohare without the game becoming a power point presentation.

Ps: also don’t set object detail and terrain detail sliders to 200 - that also crushes performance at 4K. Unfortunately 100 is really the only usable setting for now.

Isn’t it silly that we all saw the promotional videos, eagerly awaited what was marketed as a sim, and once we paid for it, realized that it is more of a game and that to play it on current top end hardware, we have to cripple it to last gen games?

Either way I have more faith this new title will eventually be able to spread its wings fully in the future with hardware/performance efficiency and optimization… than say FSX back then that was just crippled by restrictive memory code from the jump.
I did find it really weird and backwards this new sim was actually released in DX11 though…

There are some things that will have a very small impact on visuals that have a major impact on frames. The trick is finding a balance between turning up the things that you can really see and turning down the things you can’t. Normally, that would take a LOT of trial and error. Lucky for us, someone already did it, and recorded it. Also, if you like AI traffic, try using offline AI and dial it down to 50%, then dial down the ground vehicles and ground aircraft. I have a mid-grade system, and I get a very steady 20 FPS over land and 40 over open water. Here’s that video, and then my settings and core specs after. You’ll see that some things (clouds) are maxed out, but other things are low/off. (Yeah, the video is long, but sit down with pencil and paper and make notes so you can go back into the sim and set everything at once. And don’t second guess yourself after - stick to your notes!) 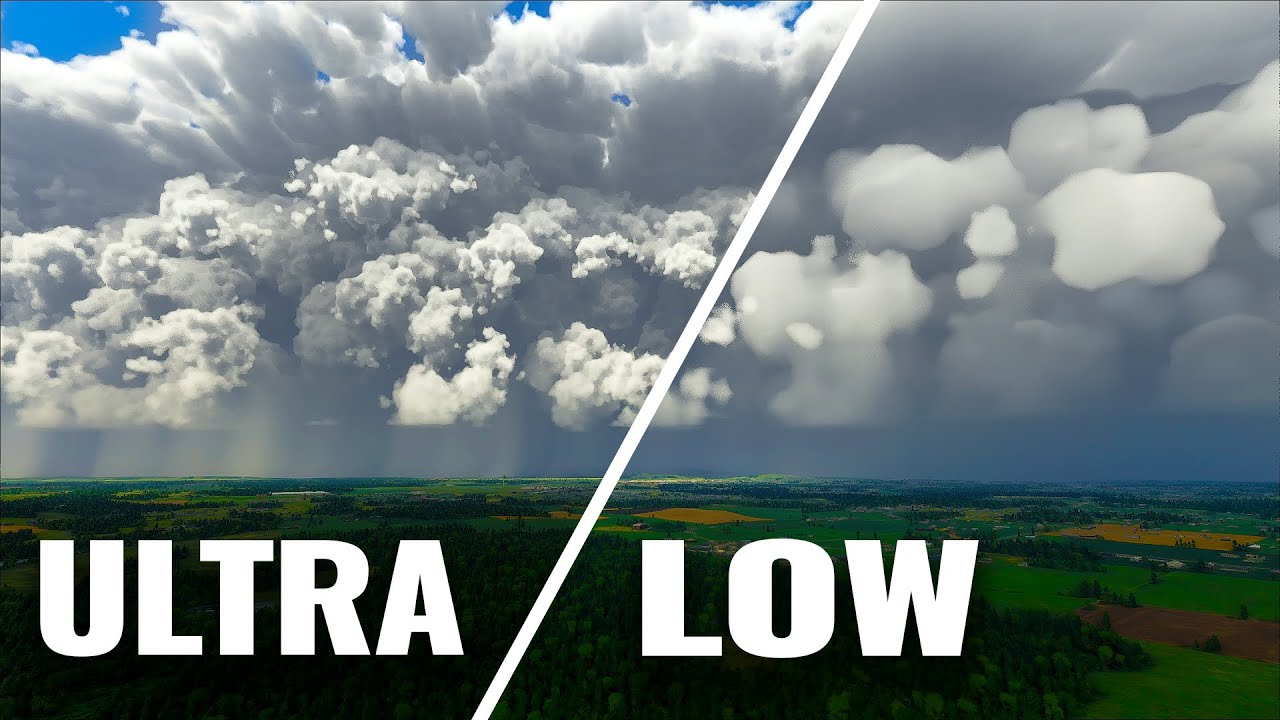 I’m trying to do the JFK landing challenge. In the air, I get 25 fps. Close to the ground I get 14 fps. This poor performance doesn’t even change when I lower settings one by one like shadows, terrain, etc.

Man you got something bad going on. My rig is comparable to yours and I’m getting way better FPS.

New York and Tokyo can mess with frame rates, but most places, like my home town which is PG graphics, I’m pulling way over 60fps on 1440p all on ultra. Wilderness areas like New Guinea or Hoover dam areas I get 80fps.

MegaRiceBall734 mentioned upgrading to a 5000 series CPU, as you get 18-20% IPC improvement from the 3000 series. I swapped out my 3600X for the 5600X and noticed a worthwhile gain. Extra cores only give maybe 2fps difference in this game, or any games really.

Just took this screen shot of NY landing challenge. Was getting high forties to low 50’s all the way down. 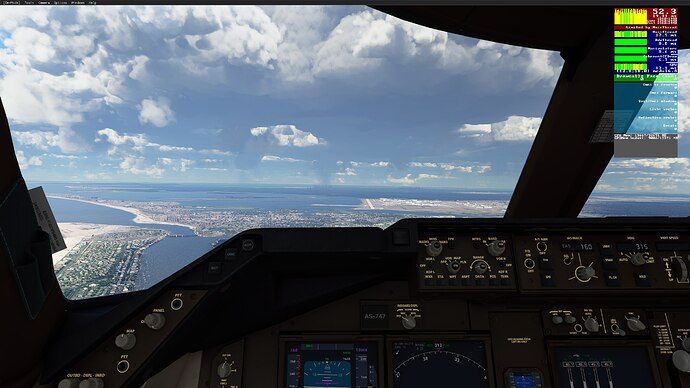 What about on the ground? What about during takeoff?

Could very well be I was getting smooth performing leaving JFK with the a320neo yesterday.Now today its stuttering1

I feel your pain. I have a similar system and I’m lucky to get 50FPS (4K) in a GA aircraft over the ocean.

This game is running on a code base that’s a decade old (FSX) and is terribly un optimized for modern hardware. I’m concerned it will never perform well. Some people are clinging to DX12 to save this sim but without rewriting and optimizing the core architecture, the GPU API will matter not at all.

Fortunately 30FPS is enough to get a smooth experience but even that can be a challenge when photogrammetry starts popping in. Never mind trying to load most of the completely unoptimized Google derived addon scenery.

What about on the ground? What about during takeoff?

Lower frame rates than approach. High 30s to low 40s taking off again in the NY landing challenge inside the cockpit, CPU limited. Perfectly playable and quite smooth on my rig, but FS is a real strain on any system, especially in airliner cokpits that’s for sure. Even with a top rig, you can get more in areas like NY or LA by fiddling with reflections, shadows, tree density etc, even drop render scaling to 90%. Most of the places I fly though the frame rates are way, way better.