I wish there were more steam gauges, way less Garmin screens all over the place. What do you fly?

I have been thinking of getting the deluxe edition and basically it would only be for one plane with the steam gauges. Am I better off saving that money for a third party addon aircraft?

I would wait if I had it to do over. I got the deluxe mostly for the extra hand made airport’s, not the aircraft. The steam 172 is almost good…except they inexplicably ignored the DME, which takes out a bunch of ground based approach possibilities. I’m still upset about that!

except they inexplicably ignored the DME, which takes out a bunch of ground based approach possibilities. I’m still upset about that!

Me too, would have been nice to have a full legacy system in the 172. C’est la vie… I’m going to use the GPS which does show distance to. I’ll just have to learn some more stuff

I purchased the Deluxe edition just for the 172 without the G1000, however it still has no DME?

When I have used FSX for years the main thing I enjoy is navigation challenges, using the VOR radials, DME - IFR without GPS!! I am SO disappointed there is no way to do this in FS2020.

There is not one aircraft I can use to do a navigation exercise with without GPS. I do realise that all real planes now have a GPS and I am not against that, but at least in FSX we had a 172 with full steam gauges as well as the G1000.

I really don’t think that this version of Flight Simulator is going to attract new simmers permanently, as it is missing the challenges of the past. The previous versions of the game had extensive flight instruction and documentation, and was a big influence on me getting a genuine interest in aviation and going on to get a real world pilot’s licence. If I was 20 years younger and this was my first intro to flight sims, I think it would be like any other game where you play for a month then move on to something else. I remember going for all the check-rides in the previous versions which were challenging and satisfying to complete.

I feel that so much of this product has been ‘gamified’ but in a bad way. All the ‘challenges’ for this game seem to be time-based and not skill-based. Where are the challenges for navigation?

I don’t want this to sound like a rant but with only minor developmental changes this could have been such an amazing product which would have attracted new simmers for years to come.

There is room in the 152 panel to add in a working DME and autopilot - if they added that at least we would have something! But now the product is released I have low expectations for improvements that would make a difference.

I think we will see a stack with DME, in lots of aircraft … if not from MS, then for sure from community development. I’m not it letting it worry me at the moment, too many other things to look at and learn and places to fly! 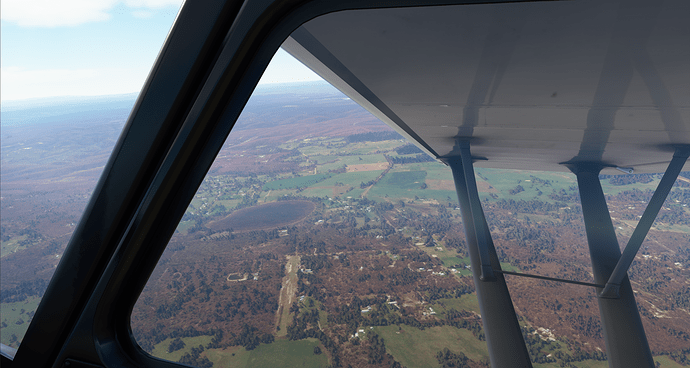 And to put a cherry on top of the drink, most of the inputs in the Garmins are difficult at best to use, first, the label of the function of the particular button really gets in the way when trying to rotate and select a frequency for example, it should not be that hard. The Autopilot in the Garmins are also difficult,specially with no documentation. The database is missing lots of small airport, and inputting a flighplan is painful because of the knobs and labels issue. There must be a way to turn them off.

In case anyone else is struggling with reading the digital altimeter and speed tapes: both can be enlarged by editing the corresponding css files.

Example: The touch screen that is built into the X Cub can be found at [Your FS Data Directory]\Official\OneStore\asobo-vcockpits-instruments-navsystems\html_ui\Pages\VCockpit\Instruments\NavSystems\AS3X_Touch\AS3X_Touch.css . 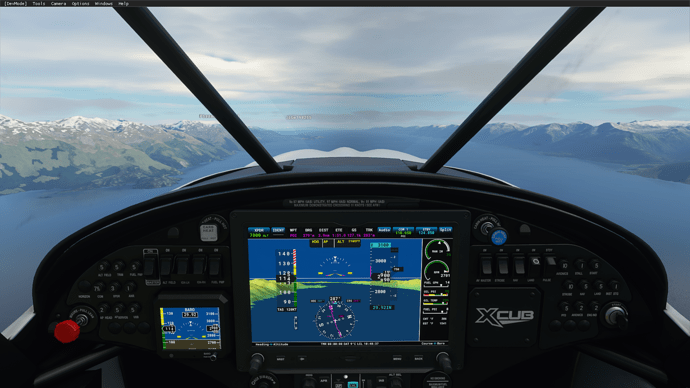 Unfortunately, it looks all messed up in the split view: 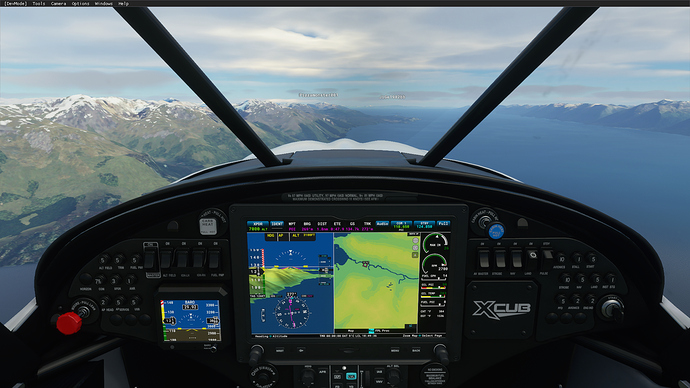 However, since I am currently flying the Patagonia bush trip and don’t intend to use the map view there, this tradeoff is worth it for me.

I assume everyone with a development background can do a lot more (and better) than this, but I thought I’d share nonetheless. Flying the X Cub certainly is less painful for me now.

What annoys me on the Garmin screens is the synthetic vision in the background. There is an option the real one to turn it off, and that has been added to the G1000/3000 as an option. Much better then. However it’s not yet been modded in the Cub version. Search “Synthetic Vision” or this thread : Don't like G1000 SyntheticVision - turn it off

Hopefully will work on the Cub at some point too

can’t even use this sim for any decent IFR flight until Reality XP or A2A Sims come, and who knows how long that will be!

Probably is too soon to ask, but have you any plans to make a version for the new Microsoft Flight Simulator? Cheers Carlos

I remember after flight training, when I got my first single pilot IFR gig, there were HSI’s in the planes. This was my equivalent of a G1000 at the time. Huge step up from two independent VOR receivers. I still think a setup like that with a 430 and a TV box weather radar is way better than a G1000. haha.

Hopefully since devs have had the SDK for awhile, we’ll start seeing some planes on the market. But, I agree, Carenado makes visually stunning planes, but their systems fidelity is seriously lacking. No more money from me until they can make something worth the price.

I am right there with you guys! Hacking a GPS as a faux DME and resorting to the Cessnas certainly rings familiar.

I believe it is very unfortunate of Asobo to have bitten off so many aircraft with GPSes and Garmins without getting ‘the basics’ right. It’d be a healthy exercise in preparation for logic behemoths like the A320 and 747-8i, if they’d spent time on the more ‘primitive’ models that preceded them. I am of course biased, because I far rather have a Boeing 707 or Dash 8-100. =)

To not even see DMEs around somewhat speaks to a very current idea of aviation technology. It seems to start with a presumption of GNSS access and builds on that. Whereas really, that’s the end result of a hefty, expensive infrastructure.

I am on the fence on buying the realsimgear G1000 or the new RTX 3080 (my RTX 2060 works just fine), and I’m leaning toward the G1000. Even with the current limitations and lack of some functions, do you recommend the G1000? I think I just need a reason to seal the deal.

You should post a version of this topic in the Wishlist forum (or ask the mods to move it?). There really isn’t a version of it there and I’m sure many would vote on it.

Personally I think Asobo kind of walked themselves into a trap here. I’m sure they included so many Garmins because it was more “impressive” and modern, but they are also vastly more complex to simulate, and so all of them are incomplete or even broken, which leaves no one happy: steam gauge fans have too few choices and glass cockpit fans don’t have all the features they want.

Clearly in hindsight Asobo did this backwards. They should have released mostly steam gauge planes at launch so the few glass cockpits could get the attention needed to be done right. Then of course it would be the glass cockpit people clamoring for more options, but at least then every plane would be fully functional at launch and they’d only have to worry about rolling out new ones as they are finished. As it stands they need to roll out new steam gauge options AND fix up the existing options at the same time.

For these VFR flights, what I do is either fly the DR400 or the classic Cessna 172 where I

IIRC there were some issues with that hardware, and MSFS. You’d need to double check that, but I believe that is the case.

On the back of that, and the fact that hardware only works with G1000 equipped aircraft, whereas the 3080 will work with everything, I would opt for the GPU.

I like it too, those dang small buttons are really tough to get at while flying and using trackir.

I learned to fly IFR the old fashioned way - without GPS. I learned how to enter a holding and compensate for winddrift, how to crosscheck Gyro and fixed scale ADF while performing NDB approaches including crossing radial stepdown fixes or how to fly a Localizer Back Course approach.

I am not inclined to get a G1000 type rating just to watch the airplane fly IFR.

Even with the current limitations and lack of some functions, do you recommend the G1000? I think I just need a reason to seal the deal.

Honestly, for MSFS the G1000 RealSimGear setup is currently just a pair of screens, there is no contact between the buttons and the sim at all. That said, they are working on this, and it will come. When I used this with X-Plane the extra immersion was immense, being able to control the FMS like it should be controlled is really really great

So, for now, not much use. In the future? Will be great, even with the limited G1000 implementation in MSFS which will hopefully get better as we go along. I know the RealSimGear guys are hoping to get the buttons set up to work with more than just the G1000 so that the autopilot controls and such will be more generic.