Despite having a PC I guess that means I can’t be a simmer as I only use joystick, pedals and headphones

On the contrary… as a PC owner, you can set your own hardware and design options. It is all up to you how much simulation you want to immerse youself in. Some folks, myself included, have built elaborate setups over the years optomizing the variety of addon hardware peripherals and multi-monitor options available.

Why everyone is concerned? In my case is MONEY. I paid for be a frustrated and unhappy person; and respecting the original post, I have to say that I also lost time, trying to download the Update. Because some Kind ASOBO or MS Manager decided not to advise about the mandatory need to install XBox App.

OK, so there seem to be two things going on here.

1. No one told us we might need this xbox app

Well, guess what, they did: 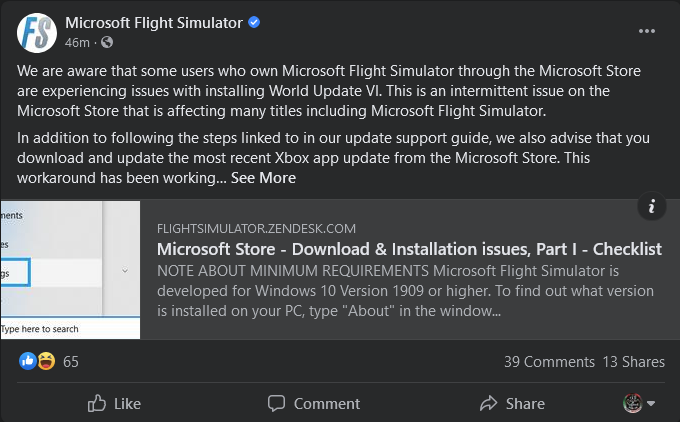 2. I don’t want to install this xbox app thing because (delete any that are not applicable):

I think that about covers it.

Editors note: I may have paraphrased some of the earlier posts in this thread and used some poetic licence

Could also have waited for the MS store to be stable again ;), but chose to do the workaround.

Editors note: I may have paraphrased some of the earlier posts in this thread and used some poetic licence

If you would ever re-use from me, please contact… no kidding

1. No one told us we might need this xbox app

Well, guess what, they did:

When was all of this announced?

Serious question, not trying to discount or discredit anything you are saying. A lot of it is true, some of it seems rather condescending (not sure if that is how you indented it). If it came out even a day or two before the update dropped shame on me (us) although I will say it was not very well publicized. If what you are showing came out during or after the update was released then, yes it is a major annoyance and lack of planning from ASOBO/MS.

Off to the grind, see ya’ll this evening.

Came out within an hour or so of the update

The XBOX app is not bloatware. It literally sits there and does nothing apart from the one time each month when you open it for the FS updates. It is the only app you need to update the sim, and is far superior to the MS Store method of updating that was used in the past as it was plagued with bugs.

Well put! The “fear and loathing” about the XBox app (because it has the word “XBox” in it), is amusing considering that the very first splash screen that appears when launching MSFS says “XBox Game Studios” in big, bold letters, and that has been the case since the sim launched over a year ago.

I did not have an issue getting the initial update to download from the Store, because I already had the XBox app installed.

I had assumed (apparently incorrectly) that it has always been required to download and run MSFS. That goes back to my initial participation in the Alpha, where the “XBox Insider” app was required. At that time, the “Insider” app was the only way to get the initial sim installation and any subsequent updates to the Alpha.

apparently they could not tell us as its a bug in the Store.

I was none the wiser about this and it hasn’t affected me. I mean technically I “need” to have Microsoft Edge on my PC (it doesn’t let me remove it) although I never use it.

They did, but. Does it change the fact that they are loosing reputation? Isn’t It like kicking your own a#.?
I am done with FS2020, I am not going to loose more time in the forums also. I can´t play in VR, even after loosing one day trying to install. I will wait until 2025 to check again. Meanwhile going back to MSFSX SE with FlyInside VR software. Good luck.

If they had done conciencious testing BEFORE they released the update, they would have discovered the fact that users whi bought through the Microsoft Store could not download the update.
To do proper testing, it means that the tester has a machine environment in the same expected state as the user. Since these users NEVER before had to have the Xbox App installed, the absence of such should have caused somebidys alarm to go off, saying something like,

“Hey, we gotta problem here, we gotta let them know there’s been a change in how the updates work from now on….Better yet, if they need xbox app to make it work, why dont we just bypass that and start their download.”

None of that hapoened. It is just poor management of the user experience due to too many false assumptions by those in charge. There have been too many gaffaws like this to sweep under the rug…

Thanks for the clarification. I will say based on this response that people do indeed have a legitimate gripe with ASOBO. They choose to fundementaly and significantly change the update method with no prior notice.

What make this even worse (for me at least) is that there was not even a notification of the change when one went to update. Seriously, how hard would it have been to simply post a banner when launching the sim stating ‘XBox app required for installation’. That would have been enough for me and saved me about an hour of internet hunting to find this out.

Not good form from a group whose reputation is slipping rather rapidly.

Anyway, thanks again for the clarification. I did not want to just pull the pin on the post-grenade without know a few more details.

what is this xbox app people are talking about? I don’t see anything new for me, unless I had it before from Halo or something.

You don’t need the Xbox app; some folks just think you do because one workaround for ‘Microsoft Store isn’t showing the update’ was to suggest using the Xbox app which has another way to access the Microsoft Store, and they took it out of context.

Well, at the time of release of the World Update, users who bought the PC version were told to go to the Microsoft Store, which did NOT find the update. Since there was no prior testing ti fix same, users had no choice except to, luckily, discover the XBox workaround. Until verified by some kind of response from either MS or Asobo, users live with the solutions they find.
If things get fixed later, and it turns out there was a bug in the Microsoft Store, users had no way to know what the intentions were of MS or Asobo at the time of their difficulty in getting the update installed.
If there was any misunderstanding that happened, it certainly was not caused by users having to “make do”, at the expense of wasted time, frustration, and misguided developer and package install testing.

I read very early on after initial release of MSFS last year you had to install the Xbox app, so nothing new here. I remember it clearly because I was struck as to why, then, with no Xbox release on the horizon they would weave that into the install recommendation.