People are always asking about hardware upgrades and getting a lot of speculation in response. So FWIW, I thought I’d do one and post some actual results. I have an RTX 3080+Reverb G2 and was fairly unhappy with VR performance. Choppiness, stuttering, etc. I decided to blame my i7-8700 (locked).

Before I upgraded, someone on another thread was like, “didja disable virtualization in ya BIOS?” I’m like “meh, snake oil.” But tried it, and that got me a big improvement. Stutters gone!

With cash still burning a hole in my pocket, I bought an on-sale i7-11700 at a place with a solid return policy. Another big jump. 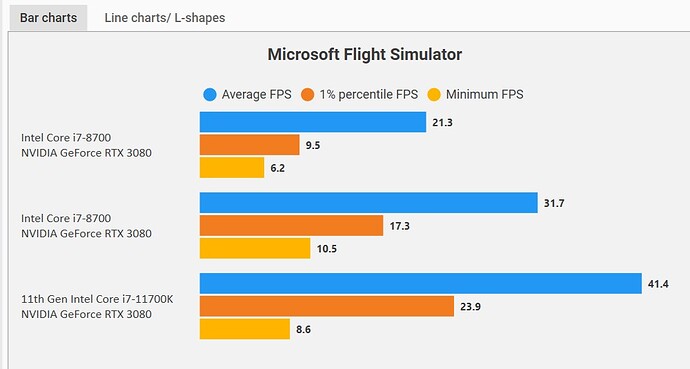 Now I can comfortably fly at 30fps with 90% in devtools, 80% in-game with 100/100 LOD. This leaves me comfortably GPU-bound and with enough CPU headroom to crank up traffic and other goodies.

Flightplan is EWR->LGA direct, partly cloudy weather, in the TBM 930. Benchmark starts at 1000’ ft ASL and runs for 20 seconds. Probably one of the denser areas in the game.

For all my benchmark I don’t fly, too random. I use same date, hour, weather (clear sky so no random cloud), plane, airport, start in the tarmac, don’t move my plane, and wait few minutes to stabilize. I also don’t check fps as I use 45fps locked ASW OFF (no retropro) with my Oculus CV1. What I check is GPU usage, far more precise. I can have 45fps but 80% GPU usage, or 45fps and 65% GPU usage, etc.
Edit: I use VR RenderScale 70% and OculusDebugTool Supersampling x1,7. Crisp.

Could you explain what the downside of disabling virtualisation outside of msfs.

Does it just mean you can’t run a VM or emulator with this off?

If that’s not the case, what type of scenarios would require virtualisation on in bios?

But anywhere you have processes running hard and no free time on a single core, virtualization will slow that process down because it will kick it off the core to let other processes have some time too. Virtualization gives most advantage when you have lots of processes that all have various things they wait on and would otherwise be wasting time spinning in the wait tying up a core.

However, I also note @N7783L post above and also decided to look up virtualization on Xbox One X consoles. (e.g. https://www.reddit.com/r/xboxone/comments/kqeh6o/ms_decision_to_be_heavy_on_virtualization_has/)

I have to confess I don’t fully understand all this. However a thought did occur to me. If the MSFS build for Xbox is going to utilise virtualization (and is a similar build on the PC) then will it be advisable, when the Xbox version of MSFS is released (i.e. Sim Update 5 in July), to ensure that virtualization is enabled in the PC BIOS?

I guess, for me, time will tell which gives better performance!

Those are great questions. The new XBox is very much like a PC and MS is trying to unify everything. FS2020 isn’t launching on the XBox until DX12 I believe so with DX12 being able to spread the load over more cores and stop the single core from being buried by a do-all process, that those cores are virtualized may not be so bad and may even see performance benefits. Should get lots of test results as soon as DX12 in FS2020 hits. I think that article is more about virtual machines though.

They don’t seem to say specifically (I just skimmed it) but it sounds like they will be putting games and apps in containers so they are less likely to interfere with the OS running the XBox. That’s different from swapping processes in and out of cores, though.

The benefits of virtual machines especially with Windows as the host, is that if a buggy app (FS2020?) corrupts Windows and requires a reboot, only the virtual machine disappears and not the host OS. It just keeps on keeping on and is ready to launch the next app with happy(?) users able to relaunch the app if they want. Containers/virtual machines can isolate problems to a virtual machine. Plus each virtual machine can be provisioned with just what that app needs and no more. And it can help with security because it’s difficult for apps to escape their virtual machine prison. And if MS is going virtual machine for XBox, that means they have really reduced any performance penalties from virtual machines. You can give VMs direct access to hardware so I bet they are throwing every trick at their VMs. Will be interesting to watch.

But for those of us on PC, it’s hard to say if DX12 will benefit from virtualization or not. It could even be a wash and likely will be tied to number of cores and other PC hardware metrics.

Is there a roadmap for the implementation of DX12?
Are there more details like DLSS or RT?

What’s interesting is that on my old motherboard, where virtualization was buried as something called “VX-D,” it was enabled by default. Been that way for four years.

On the new motherboard, it was disabled by default. I’d never have thought to go in and even look at it for any reason.

If you’ve ever gone on a motorcycle forum and watched people debate the best motor oil for a particular bike, the endless discussions here about HAGS and multithreading and such remind me of that. Yet I hadn’t seen virtualization mentioned before last week, and it’s the only thing to have an impact–and a huge impact. Strangely, it only impacted VR though, not 2D.

My understanding is a bit different; W10 applications run in protected memory space (which is what I think you’re describing) without use of a virtual machine.

Virtual machines are for running an entire OS within another host OS–for example, using VMWARE, Hyper-V and certain emulators. Disabling VT-X/VT-D in BIOS prevents you from using those solutions. No impact on us non-power-users.

Really interesting thread, a lot of digest. I upgraded from an i7 7700 to a 5600X earlier this year and saw a big improvement. I’m just wondering though if the 5600X, which I know is really popular with sim players, is going to get old really fast, particularly for VR which needs extra CPU grunt work.

I know all these upcoming optimisations are by the sounds of things going to make a big difference for everyone but like I said I do wonder if 6 cores are going to cut it for really smooth VR performance. If people with a 5800X are reporting really good results I might upgrade again sooner rather than later.

Strangely, it only impacted VR though, not 2D.

Can’t say for certain but I’d guess you have enough headroom for virtualization when in 2D and in VR that main thread is busier and notices the interruptions.

My understanding is a bit different; W10 applications run in protected memory space (which is what I think you’re describing) without use of a virtual machine.

I’m probably wrong in my interpretation then. Thanks! My experience is with vmware-like systems. I didn’t know there was yet another virtualization possible. Turning quite complex!

AFAIK turning off Virtualization and/or VT-D (I have both in my MSI Bios) don’t prevent to use virtual machine like vmware. They will run slower with that OFF. E.g. the Android “emulator” BlueStack on PC will use more than one core if Virtualization is turned ON, so they recommend to turn it ON. It was always ON in all my MB by default, and that’s the first things I turn OFF, no usage of VM for me, or really rarely.

@N7783L thank you very much for taking the time out to provide some insight. Much appreciated.

I didn’t know there was yet another virtualization possible. Turning quite complex!

It is even more complex with the latest(s) WM Ware offering because IIRC you can opt using either their own hypervisor or Hyper V !

I have experimented with VMs to run various security toolkits in Linux and they are very handy and useful things - and sometimes confusing but not too bad. They sound really complex until you set one up and start using it. But I’m still pretty inexperienced with them and just on the lower rungs of the ladder. In checking something else I just found a “bare-metal hypervisor” which looks pretty cool and sounds really fast for hosting VMs. So much to know!

Is not the 11th gen CPU (the OP mentioned) giving you PCI 4 rather then PCI 3 gen 4 performance? So in the end you get faster CPU AND GPU performance (with the 30x GPU staying the same) Or am I wrong?